Over 40 Chinese fighter jets, J10, have been witnessed in Skardu in the month of June itself. The Chinese Air Force is understood to have been preparing to use the Skardu airbase to launch an attack against India. 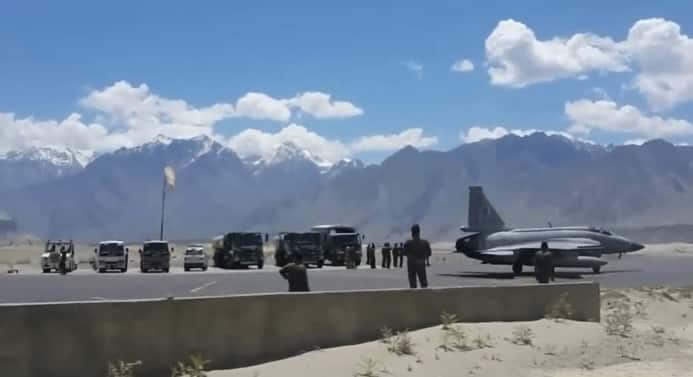 New Delhi: Amid Sino-India border along the Line of Actual Control in Ladakh, Indian intelligence agencies have recently noticed activities of the Chinese Air Force at Skardu Airbase in Pakistan occupied Kashmir (PoK).

Zee News has come to more than 40 Chinese fighter jets, J10, have been witnessed in Skardu in the month of June itself. The Chinese Air Force is understood to have been preparing to use the Skardu airbase to launch an attack against India.

Since Skardu is merely 100 kms away from Leh and is much closer than any Chinese airbase, China is testing the capabilities of this airbase so that it can be used against India, which may have to face attack from the double front.

China is learned to have three airbases, including Kashgar, Hotan, and Nagri Gurgunsa, to launch its fighter jets against India in Ladakh. These three airbases, however, have limited abilities to take action against India. The distance from Kashgar to Leh is 625 km, Leh to Khotan is 390 km and Leh to Gurgunsa is 330 km. All these airbases are located in Tibet at an altitude of over 11000 feet.

On takeoff from such a height, both the fuel and the carrying weapon of fighter jets have to be kept low, reducing their firepower as well as range. Also, the possibility of getting caught on such a long-distance flight from radar also increases, according to Zee News.

For the Chinese Air Force, it will be easier to attack Indian bases, both Ladakh and Kashmir, from Skardu, which is around 100 km away from Leh is, while Kargil is around 75 km. This airbase has two runways, one of which is two and a half km long and the other is 3.5 km long. Chinese fighter jets can easily proceed and return to Skardu.

Notably, if India retaliates against Skardu, then Pakistan will have an excuse to start the war.