Prime Minister Narendra Modi's meeting with United States President Donald Trump has seem to have provoked the Chinese media as the latest to come from them is that the relationships between India and US has touched new heights following the meet between the two world leaders. 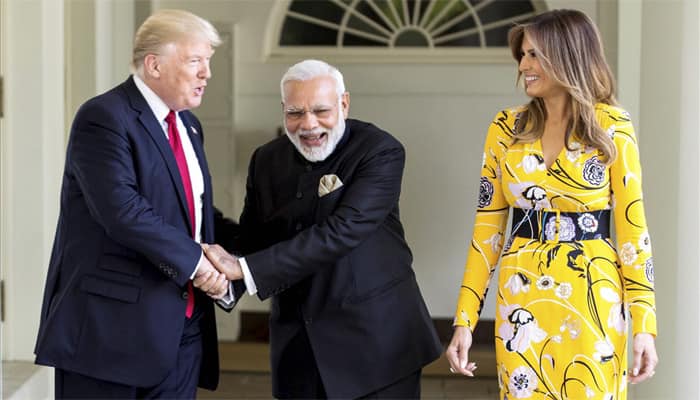 Beijing: Prime Minister Narendra Modi's meeting with United States President Donald Trump has seem to have provoked the Chinese media as the latest to come from them is that the relationships between India and US has touched new heights following the meet between the two world leaders.

President Trump addressed India as a "true friend," cementing ties that had deepened during President Obama's regime with substantial contributions by his predecessors, George W. Bush and Bill Clinton.

While the meeting had been pegged as a "get to know each other" one by diplomats from both sides, there were a lot of key takeaways for the two countries in the visit. It is being seen incredible by experts keeping in mind the fact that New Delhi and Washington had a face-off earlier this month after President Trump rejected the Paris Agreement on climate change, accusing India of demanding money in exchange of implementing the pact.

With his "low on expectations" visit to the White House, Modi succeeded in winning endorsement of the U.S. on some vital areas of interest for India. The most important of these was a joint agreement by both countries to fight terror globally and what is being allegedly penetrated on Pakistan's soil.

The two leaders vowed to ensure strong cooperation on terrorism. President Trump also issued a message to Pakistan to "expeditiously bring to justice the perpetrators of the 26/11 Mumbai, Pathankot, and other cross-border terrorist attacks perpetrated by Pakistan-based groups."

Before this, the United States declared terror outfit Hizbul Mujahideen's leader Syed Salahuddin as a global terrorist which India had long been seeking.

"This clearly sends out a strong message to perpetrators of terrorism across the globe, especially in Pakistan and neighboring countries. There were no inhibitions from either side on the language used on cross-border terrorism," said Prof Ajay Sharma, a Delhi-based expert.

"It is a significant achievement that the two countries reached a decision on terror and to destroy what was mentioned as radical ideologies. With the attacks in the UK and rise of the Islamic State, India and the U.S. have to be key partners in ensuring safety of the global order," said Jishan Shah, another political expert.

"Both Modi and Trump are known to be very strong administrators when it comes to terror and an agreement on this has kind of eased Indo-U.S. relations on other strategic issues," he said.

Besides terrorism, trade and economy also featured majorly in the meeting. Before meeting the U.S. president, Modi held a private talk with U.S. Defense Secretary James Mattis and pledged to cooperate deeply in matters of defense and security. To cement this, the United States cleared the sale of predator Guardian drones to India in the wake of similar security interests across borders and sea, a first by a non-NATO country.

"It's a clear sign of a partnership that the U.S. is trying to maintain with India. Since President Trump took over, American foreign policy has struggled. But he spoke of long-term trade relations with India, like the latter buying passenger aircraft and natural gas. This shows that both India and the U.S. are working as a coalition of sorts," Shah added.

On his part, Modi displayed pragmatism in the meeting by putting "America first" rather than push for his "Make in India" initiative and did not touch on issues of contention like the climate pact or the H1B visa issues on which the Trump administration has made its conservative stance clear.

This was a clear effort to break the ice with a government that is playing by its own rulebooks -- the move seemed to have worked well for India, especially since President Trump spoke of cuts in trade deficit and boost for Indian service exports, said experts.

In the US, Modi held talks with Trump during which the two leaders discussed several issues and vowed to strengthen co-operation on terror.

India and the United States also urged Pakistan to ensure that its soil is not used to launch terrorist attacks on other countries.

PM Narendra Modi spent 33 hours on plane in four-day trip to Portugal, US and Netherlands