Coast Guard may affiliate with BSF and CRPF in future: Official

In the first affiliation among paramilitary forces, the Assam Rifles and the Indian Coast Guard had on May 22 signed the 'Charter of Affiliation' to utilise each other's assets for operational training, sports, and adventure. 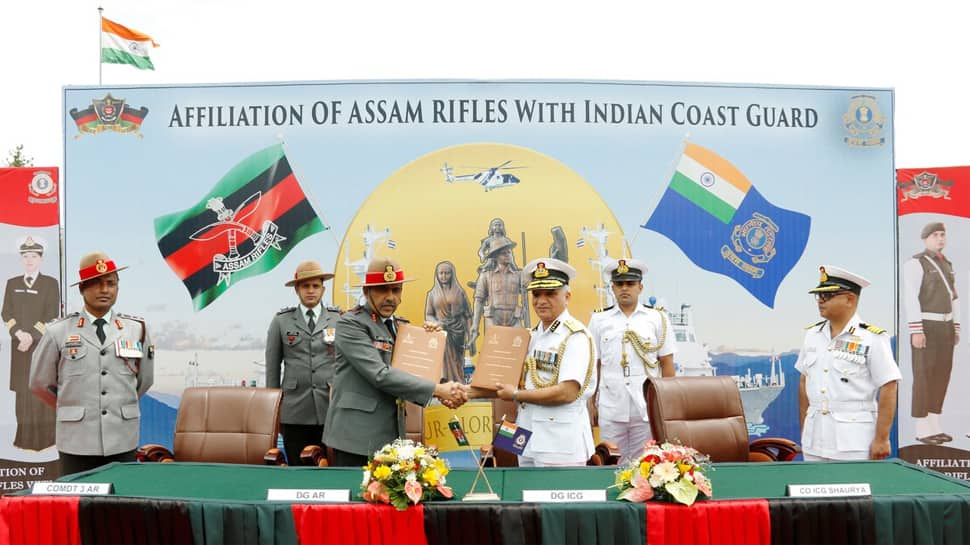 Chennai: Indian Coast Guard, which recently joined hands with the Assam Rifles to utilise each other's assets for operational training, may have such tie-ups with other paramilitary forces, a top CG official said on Tuesday.

Speaking on the sidelines of a reciprocation ceremony here held onboard "ICGS Shaurya", which has been affiliated with the 3rd (Naga Hills) Battalion of Assam Rifles, Coast Guard Additional Director General VSR Murthy said the collaboration was the first of its kind initiative by the marine force. "Maybe in the future. This is the first step which will yield so much of dividends," he told reporters when asked whether the Coast Guard would have similar associations with other paramilitary forces such as the BSF and the CRPF.

In the first affiliation among paramilitary forces, the Assam Rifles and the Indian Coast Guard had on May 22 signed the 'Charter of Affiliation' to utilise each other's assets for operational training, sports, and adventure.

Director Generals of the Indian Coast Guard and the Assam Rifles Rajendra Singh and Lt Gen Sukhdeep Sangwan respectively had inked the pact at a ceremony in Shillong.

Talking about the affiliation, Murthy said one was a land force and the other a marine force and both had their own experience and strong points. "...When they work closely they understand operational philosophies and culture. More importantly, it would develop bondage between them," he said.

The bilateral cooperation between both the forces would facilitate the exchange of information and personnel, building up of camaraderie, utilising each other's assets for training and sports/adventure and understanding culture and traditions, he said.

On whether such cooperation was necessitated by any specific threat or shortcoming in the present set-up, the Coast Guard official said the association was purely to build a friendly relationship between both the organisations.

A combat battalion of Assam Rifles will soon be training on-board ICGS Shaurya, an indigenously built off-shore patrol vessel, it was stated.

A special postal cover marking the affiliation was released by officials of the two organisations, including Murthy and Lt Gen Sukhdeep Sangwan, during the ceremony.