Extremely severe cyclonic storm 'Amphan' on Monday turned into a super cyclonic storm, only the second over the Bay of Bengal in two decades, and is spiralling towards Indian shores, prompting West Bengal and Odisha governments to start evacuating people from vulnerable areas. 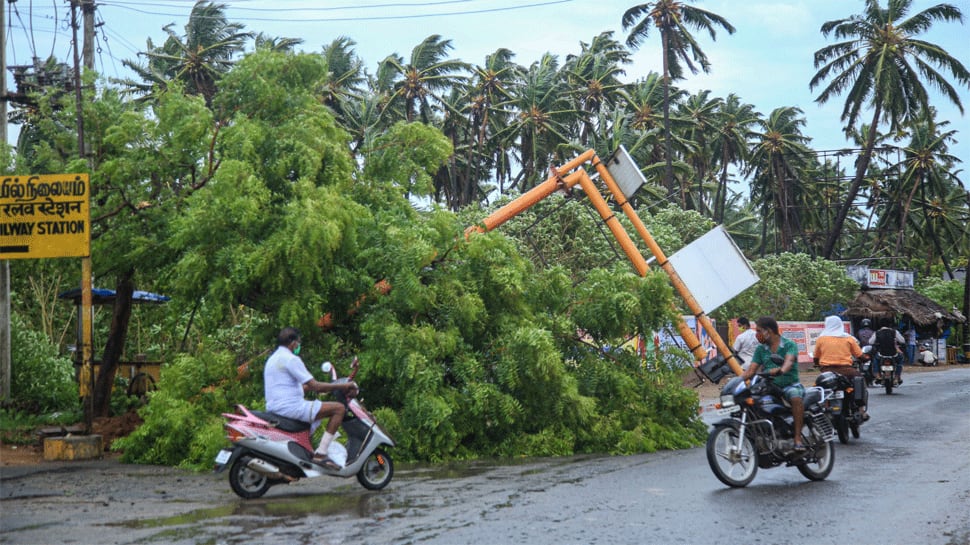 Kolkata/Bhubaneswar: Extremely severe cyclonic storm 'Amphan' on Monday turned into a super cyclonic storm, only the second over the Bay of Bengal in two decades, and is spiralling towards Indian shores, prompting West Bengal and Odisha governments to start evacuating people from vulnerable areas. The National Disaster Response Force (NDRF) has deployed 37 teams in the coastal areas of the two states, its chief SN Pradhan said.

Prime Minister Narendra Modi reviewed the situation with Union Home Minister Amit Shah and top government officials in New Delhi, as the impending super cyclone compounded its worries at a time when it is grappling with mounting COVID-19 deaths and cases.

In somewhat comforting news for the Centre and the state governments, the India Meteorological Department forecast that the storm will lose some of its intensity on the way and slam West Bengal as a very severe cyclonic storm during the landfall between Digha in the state and Hatiya islands in Bangladesh on Wednesday evening.

It will still have a maximum sustained windspeed of 165 to 175 kmph gusting up to 185 kmph, the weatherman said.

Howling winds travelling at a speed of 220 to 230 kmph and gusting to 255 kmph were being witnessed over west-central and adjoining parts of south Bay of Bengal. It is likely to increase further to 230 to 240 kmph and gusting to 265 kmph by Monday night, IMDs Regional Director G K Das said in Kolkata.

An unspecified number of people were evacuated from coastal areas of Odisha where Jagatsinghpur, Kendrapara, Bhadrak and Balasore were likely to experience heavy rainfall accompanied by high-velocity winds, particularly on May 19 and 20, IMD Director General Mrutyunjay Mohapatra said.

The meteorological department, which has issued an "orange message" for West Bengal, warned of extensive damage in Kolkata, Hooghly, Howrah, South and North 24 Parganas and East Midnapore districts.

Disruption of rail and road link is likely at several places but that will not have a major impact on human lives as only skeletal traffic ply the roads and railway tracks. Large-scale damage to communication and electricity lines, crops and houses are feared, official sources said. Official reports reaching Kolkata said 40,000 people have already been evacuated from South 24 Parganas district.

"Storm surge of 4 to 5 metres above astronomical tide is likely to inundate low lying areas of South and North 24 Parganas and about 3 to 4 metres over low lying areas of East Midnapore district of West Bengal during the time of landfall," Das said.

Prime Minister Narendra Modi assured all possible central assistance to the states likely to be hit by the cyclone.

"Reviewed the preparedness regarding the situation due to Cyclone Amphan. The response measures, as well as evacuation plans, were discussed. I pray for everyone's safety and assure all possible support from the Central Government," PM Modi tweeted soon after the meeting.

He also reviewed the evacuation plan presented by the National Disaster Response Force (NDRF), a statement from the Prime Minister's Office said. "During the presentation of the response plan, DG NDRF (SN Pradhan) informed that 25 NDRF teams have been deployed on the ground while 12 others are ready in reserve. Twenty-four other NDRF teams are also on standby in different parts of the country," the statement said.

West Bengal Chief Minister Mamata Banerjee said in Kolkata that NDRF and State Disaster Response Force (SDRF) personnel were in a state of readiness to evacuate those who will be hit by the cyclone and also to reach relief.

"We will be monitoring the situation for cyclone Amphan 24X7. Chief secretary Rajiva Sinha, Home Secretary Alapan Bandyopadhyay and secretary disaster management will be monitoring the situation," she told reporters. Home Secretary Alapan Bandopdhyay said that the entire state machinery is prepared to deal with the situation. Disaster management teams are being sent to cyclone shelters in the coastal areas and other places for rescue and relief operations, he said.

Bandopadhyay said that provisions have been made for maintaining social distancing norms at these shelters in view of the COVID-19 pandemic. He said that the National Disaster Response Force (NDRF) teams are also there for rescue and relief operations. The state chief secretary held a meeting with concerned officials on Saturday evening to take stock of preparations and the movement of the cyclone, he said.

Fishermen have been advised not to venture into North Bay of Bengal along and off West Bengal-Odisha coasts from May 18 to 21 and those who are out in the sea were asked to return to coasts by May 17. Sea condition will be very high to phenomenal over the north Bay of Bengal on May 19 and 20, the regional Met director said.

The Indian Coast Guard (ICG) has also prepared itself for maritime search and rescue operations. The ICG ships and aircraft on patrol are directing fishing boats operating at sea to return to the harbour for safety, it said.  Relief materials, dry fruits and trampoline have been dispatched, he added.

Amphan is only the second super cyclone over the Bay of Bengal after the one that savaged Odisha in 1999, claiming nearly 10,000 lives.