With Cyclone Tauktae intensifying into a cyclonic storm on Saturday (May 15, 2021), severe flood-like situations have been predicted for Tamil Nadu and Kerala. The Central Water Commission (CWC) also issued an ‘orange bulletin’, predicting a severe flood situation, in the two states on Saturday. 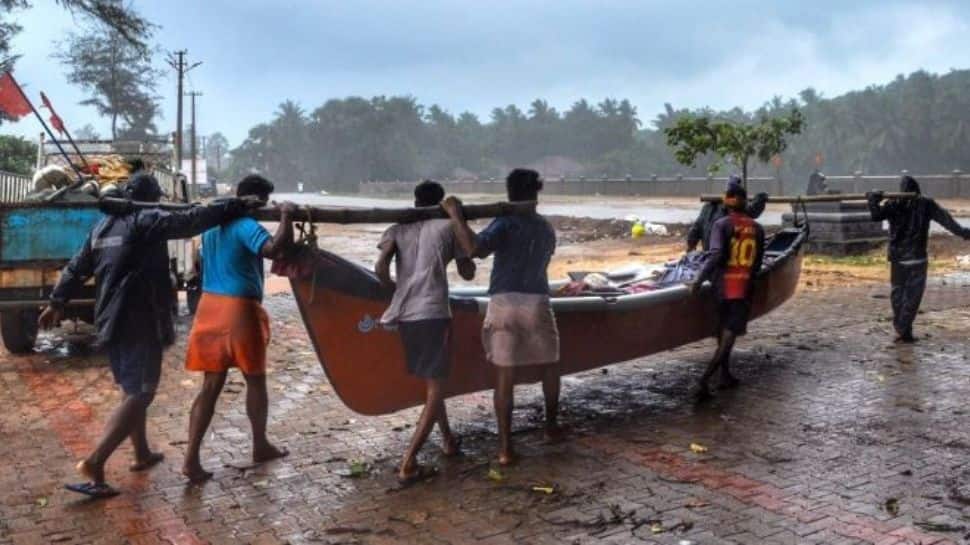 New Delhi: With Cyclone Tauktae intensifying into a cyclonic storm on Saturday (May 15, 2021), severe flood-like situations have been predicted for Tamil Nadu and Kerala. The Central Water Commission (CWC) also issued an ‘orange bulletin’, predicting a severe flood situation, in the two states on Saturday.

Additionally, Gujarat and Maharashtra are also preparing to grapple the impact of Tauktae on the coastal Konkan and some interiors which are likely to be affected with heavy rains and gusty winds.

Amid the intense situation, Prime Minister Narendra Modi is scheduled to review preparations against the upcoming Cyclone Tauktae with senior officials from the Government and National Disaster Management Authority (NDMA).

On the other hand, Congress leader Rahul Gandhi also appealed to his party workers to provide all possible assistance to those in need in view of cyclone Tauktae alert issued in Kerala, Maharashtra, Goa, Tamil Nadu, Gujarat and Karnataka.

"Cyclone alert has been issued in Kerala, Maharashtra, Goa, Tamil Nadu, Gujarat and Karnataka. Cyclone Tauktae is already causing heavy rains in many areas. I appeal to Congress workers to provide all possible assistance to those in need. Please stay safe," he tweeted.

Cyclone Tauktae has caused damage across North Kerala, especially in coastal areas. The worst affected on account of the rough sea include the coastal hamlets in the state capital Thiruvananthapuram, parts of Kollam, Alappuzha, Ernakulam, Thrissur, Malappuram, Kozhikode, Kannur and Kasargod.

Starting Friday night, many trees were uprooted and power supply disrupted for long hours on account of the gusty winds and heavy rain in Kerala. High tides and rough sea have led to sea water gushing into nearby areas causing damage to properties in Thrissur, Malappuram, Kannur and Kasaragod districts.

The Mumbai civic body Brihanmumbai Municipal Corporation (BMC) has suspended the COVID-19 vaccination drive in wake of Cyclone Tauktae. The government vaccination centres will remain closed on May 15 and 16.

The National Disaster Response Force has increased from 53 to 100 the number of teams earmarked to undertake relief and rescue measures in the wake of impending Cyclone Tauktae, a senior officer said on Saturday.

The force's Director General, S N Pradhan, said in a tweet that these teams are being mobilised for deployment in the coastal regions of Kerala, Karnataka, Tamil Nadu, Gujarat, Goa and Maharashtra.

In the wake of cyclone #Tauktae alert, two C-130 J aircraft of IAF airlifted three NDRF teams comprising of 126 personnel and equipment from Bhubaneswar to Jamnagar in the morning hours today.#HADROps pic.twitter.com/h6cCaT4xZ1

On Friday night, the India Meteorological Department (IMD) had informed that the low-pressure area over the Arabian Sea near Lakshwadeep had intensified into a deep depression and will intensify into a cyclonic storm in the following 12 hours.

"Deep Depression intensified into a Cyclonic Storm "Tauktae" (pronounced as Tau`Te) over Lakshadweep area and adjoining southeast and east-central the Arabian Sea: Cyclone watch for south Gujarat and Diu coasts", the IMD had tweeted.

A tweet by the Spokesperson of the Indian Navy, also confirmed "#CycloneTauktae-Update 1-Deep depression 240 Nm NW off Kochi on 14th evening very likely to intensify into a cyclonic storm Tauktae by 15th morning.

The cyclone is likely to impact areas including the coast of Kerala, Karnataka, Lakshadweep, Goa, and Maharashtra. The IMD had also predicted that the cyclone would hit the Gujarat coast by May 18 morning.