With the bar on heights of human pyramids relaxed by the Bombay High Court, the celebrations were organised with full gusto in Mumbai, Thane, Navi Mumbai, Palghar, Pune, Nashik, Kolhapur, Nagpur and other major cities. 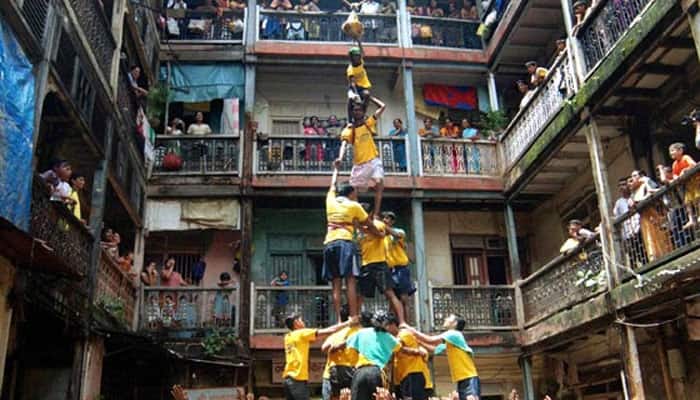 Mumbai:The birth of Lord Krishna was rung in with religious fervour on Tuesday and was followed by colourful `Dahi Handi` with a distinct national flavour by thousands of Govindas all over Mumbai and other parts of Maharashtra on the occasion of Krishna Janmashtami.

With the bar on heights of human pyramids relaxed by the Bombay High Court, the celebrations were organised with full gusto in Mumbai, Thane, Navi Mumbai, Palghar, Pune, Nashik, Kolhapur, Nagpur and other major cities.

Groups of revellers — or Govindas as they are popularly known — went around various venues singing "Govinda Ala Re, Ala, Zara Matki Sambhal Brij Bala" to the accompaniment of drums and music as huge crowds of excited onlookers welcomed them.

The Govinda troupes quickly moved onto centre-stage and tried their luck at the `Dahi Handi`, pot of milk, butter and curds, hanging high above the ground, between 30-40 feet.

Those successfully breaking the `Dahi Handi` hanging barely within reach of the precariously balanced human pyramids, were rewarded with grand prizes in cash and kind, besides fame and glory.

Combining the spirit of `Dahi Handi` with the country`s Independence Day celebrations, the revellers sported tattoos, face colours, attires in the national tri-colour, while pots were decorated in the tri-colour and other symbols of nationalism.

In Mumbai, major pyramids built over six to eight tiers were witnessed in Dadar, Ghatkopar, Borivali, Jogeshwari and Mulund, besides Thane and Navi Mumbai, many patronized by local units of major political parties.

A Dadar group managed to break the `Dahi Handi` pot with an eight-tier pyramid, while a Thane all-girls group succeeded with a six-tier pyramid.

In Thane, the biggest prize money on offer was Rs 11 lakh and in Ghatkopar the figure was Rs 25 lakh for the successful Govinda troupe.

The Jai Jawan Mandal of Thane attempted to build a nine-tier pyramid, but before the top Govinda could grab the pot, it came crashing down like a pack of cards.

All-girls Govinda groups in Dadar, Goregaon and Vikhroli were a huge attraction when they created six-tier pyramids, while an all-girls group of Vile Parle managed to reach and break the `Dahi Handi` pot, amidst deafening cheers and claps, making them among the first to succeed in the city on Tuesday afternoon.

As per government directives, all the organisers implemented stringent security measures like helmets, harnesses and body belts, mattresses on the ground to soften the fall besides volunteers ready to rush them to waiting ambulances in case a pyramid collapsed.

The organisers made it a point to check the identity cards of all the younger Govindas to ensure they complied with the minimum age requirement of 14, besides other conditions stipulated by the government.

In addition to these highly trained, professional groups, there were small groups of amateurs in schools, colleges and housing societies with their own modest celebrations.

The `Dahi Handi` was typically hung around 12-15 feet and the Govinda pyramids rose one or two-tiers for grabbing the potful of fresh butter, curds — and lots of sweets after they "crashed" down with their families, friends and neighbours as the audience.