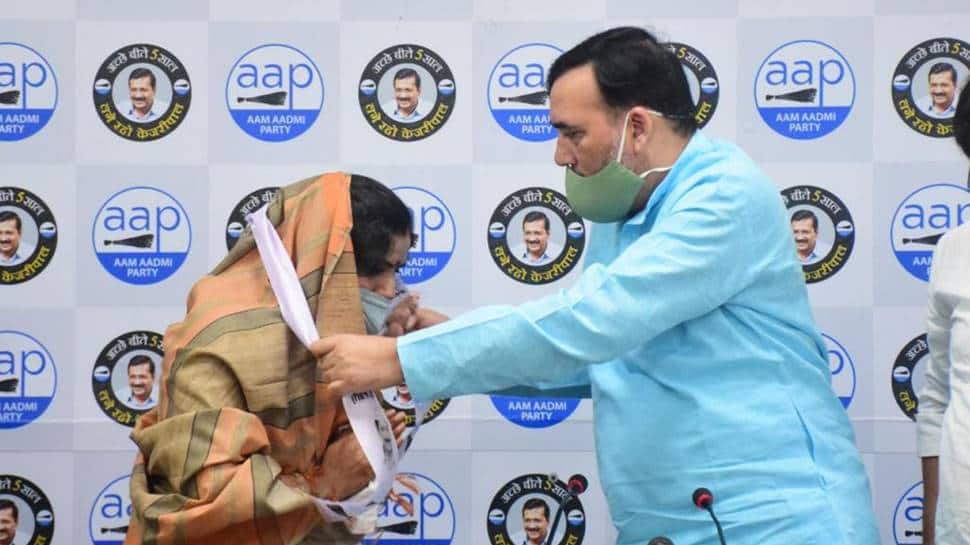 Rai said that this joining is sending only one message across Delhi, if any party or leader can work in Delhi, it is Aam Aadmi Party and Arvind Kejriwal. He said that today, due to BJP, the situation has become such that it has to sell the property of MCD.

Rai said that people are joining the Aam Aadmi Party after being impressed by Arvind Kejriwal's development mode of Delhi which is based on works in education, health, electricity and water.

Cabinet Minister Gopal Rai said, “ Inspired by the work done by the Arvind Kejriwal government in Delhi, today with us we have the Municipal Councilor from the Congress party who is the current councillor of the ward no 81 -N of Kishan Ganj, Usha Sharma, she is joining the Aam Aadmi Party. She is welcome to the family of the Aam Aadmi Party. "

He said, “Usha Sharma’s husband Sanjay Sharma who also is socially very active there,  is also joining the Party today. I want to tell you that the ward that Usha Sharma Ji is a councillor of, before this for continuously 3 times that is from 2002 -2007, from 2007-2012 and 2012-2017, Satbir Sharma was a councillor there, who is her father in law. Last time he was a candidate for the legislative assembly from the Congress party who fought against our candidate Som Dutt. He is ill right now but his blessings are with them .”

He added, “Along with this, a lot of members from their Mahila Samarthan Yuva Sangathan are joining the Party today. This is giving out a message to entire Delhi that the only party that can work in Delhi, and the only leader to work in Delhi is the Aam Aadmi Party and Arvind Kejriwal. The Delhi government has shown this with its performance. In the MCD the way the BJP ruled it for 15 years and the way the limits of corruption stooped so low, I feel this is the first municipal corporation in India where the situation is such that it has become bankrupt and is forced to sell its assets .”

Environment Minister Gopal Rai said, “It is being heard that the old buildings, the old assets of the MCD are being sold because the people of BJP have understood that unlike the last time, where they cheated the people by saying that they have changed all the candidates for the MCD for everything will happen for the better, but the situation is so bad that the MCD has had to sell its assets to survive. This message has been given out to the people of Delhi; the last by-elections also gave this signal. And therefore, those who want to work in the MCD in Delhi, are becoming a part of the Aam Aadmi Party .”

He said, “ I will request the other people of Delhi too that the Congress cannot remove the BJP. There is only one way to remove the BJP, that all those who won't work to happen in Delhi, want cleanliness, and want to end Corruption should collectively work with the Aam Aadmi Party. The way the people of Delhi gave the opportunity of working in the Delhi Legislative assembly, and how the Aam Aadmi Party has performed, even in the MCD, we will work hard and to corruption in the MCD and fasten the process of development .”

AAP MLA from Sadar Bazar Som Dutt said "It is a matter of great pleasure that after being impressed by the Delhi development model of Arvind Kejriwal Ji, and the education, health, electricity, water and all the facilities in Delhi, we have amongst us from Kishanganj ward 81 of my assembly Sadar Bazar our regional Congress corporation councillor Usha Sharma and her husband Sanjay Sharma who are social workers,  and a big team of Congress from this ward are joining the Aam Aadmi Party family today. I wish you all the best and welcome everyone to the party. I pray to God that you work with full potential and carry forward the development model of Arvind Kejriwal. "

Taking the membership of the Aam Aadmi Party, Usha Sharma, a corporation councillor from Congress, said, "Respected Gopal Rai, brother Som Dutt Ji from my assembly and my colleague Vikas Goyal present here, my younger sister Babita, my warm greetings to all. I am joining Aadmi Party today after being impressed by the work of popular Delhi Chief Minister Arvind Kejriwal. The condition of Delhi Municipal Corporation is not hidden from you. In the corporation, we are given assurance in the name of budget. Employees are not getting the salary. Those who have retired are not getting their money. The condition of education and health is getting worse day by day. I am not able to get development work done in my area, so I want to develop my area with my elder brother Som Dutt and want to develop my area under the leadership of Honorable Arvind Kejriwal. I want to assure you that we will increase the prestige of the Aam Aadmi Party and will take the party forward very strongly. At the same time, I am sure that there will be no loss in our respect."

Amongst the prominent people who joined the Aam Aadmi Party, the following people took the membership of the party

Along with these prominent people, hundreds of other Congress workers joined the Aam Aadmi Party.