Zee News Editor-in-Chief Sudhir Chaudhary on Wednesday (August 11) discussed the issue of climate change which, if not dealt with appropriately now, could potentially result in a catastrophic disaster. 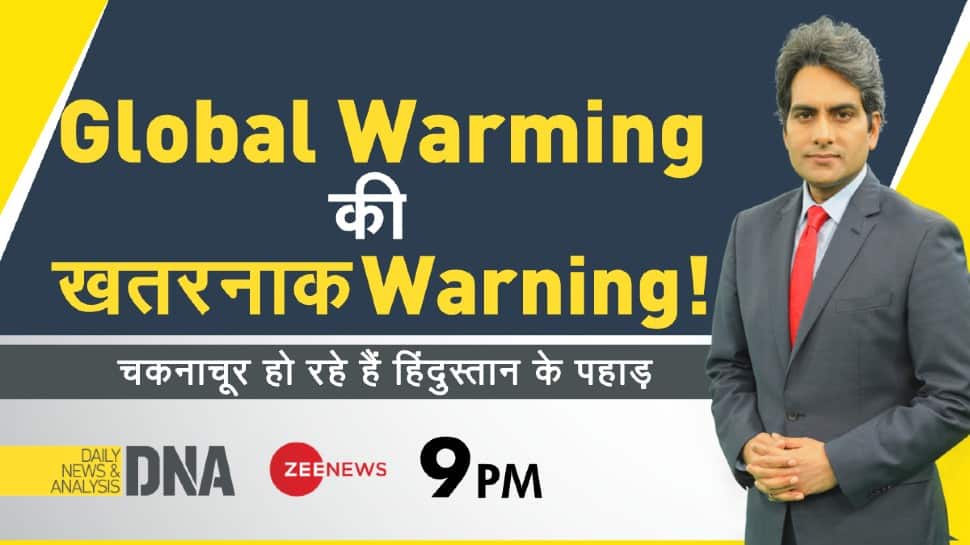 New Delhi: At least ten people were killed in a landslide that trapped a bus and other vehicles at Nigulsari in Himachal Pradesh's Kinnaur district today. This is not an unusual affair anymore, as the state has witnessed several disasters in recent times. Not just Himachal or India, the entire world is witnessing an unprecedented increase in the number of such calamities. At the heart of the matter is climate change.

Zee News Editor-in-Chief Sudhir Chaudhary on Wednesday (August 11) discussed the issue of climate change which, if not dealt with appropriately now, could potentially result in a catastrophic disaster.

The incidents of landslides in Himachal Pradesh have increased by 116 percent as compared to last year and there has been an increase of 121 percent in cloudburst incidents. In February this year, in Chamoli, Uttarakhand, a flash flood occurred due to which a hydro-project and dam broke down and many people died.

28 percent of the incidents of landslides in India are due to construction works on the mountains. The second biggest reason for the landslides is the heavy and unseasonal rains, for which climate change is believed to be responsible.

Some scientists believe that the occurrence of earthquakes and landslides can increase rapidly due to global warming. According to scientists, as the snow of the mountains or the glaciers melt rapidly, the weight distribution of the mountains changes and the possibility of collision of the tectonic plates present under the earth increases due to which earthquakes and landslides occur.

But landslides and earthquakes are not the only threat, incidents of forest fires and other calamities are also increasing rapidly.

According to the latest report of the Inter-Governmental Panel on Climate Change (IPCC) of the United Nations, the temperature of the Earth will increase by more than 1.5 degrees Celsius by the year 2040.

This is the most recent and most reliable report on climate change of the moment. It has been prepared by 234 scientists from 66 countries after assessing 14 thousand research papers, to which 195 countries have given their consent.

According to this report, even if all countries stop carbon emission, it will be difficult to stop the increase in the temperature of the earth because humans have already caused tremendous damage to nature.

All this will happen even when carbon emissions will be eliminated or controlled all over the world. But if nothing is done in this direction, then the temperature can rise up to 5.7 degrees Celsius.

According to scientists, the last decade was the warmest decade in the last one and a half million years and this is the first time that the sea level has increased a lot. All this is happening only because of human activities.

The people who do not live in these places will be wrong to assume that they would not be affected because there won’t be sufficient oxygen to breathe even in the plains. At this time carbon dioxide in the atmosphere is the highest compared to the last two million years.

Climate change is an issue about which awareness among people and governments is very low. The media of our country also does not take the issue of climate change seriously.

But the time has come to give priority to climate change because the day is not far when cities like Delhi and Mumbai will start witnessing snowfalls, cities like Nainital and Shimla will face scorching heat and the deserts of Rajasthan and Kutch will receive heavy rains.

It is hard to imagine such a grim scenario sitting in our houses today, but it is likely to become a reality soon. That is why we must not waste any more time and get serious about climate change.