Eid-ul-Fitr — one of the most significant festivals that is celebrated by the Muslim community around the world. The day marks the end of the fasting month of Ramzan for the world's 1.8 billion Muslims, especially the month-long fasting from dawn until dusk.

People usually celebrate by travelling, visiting family and gathering for lavish meals, all of which will be largely prohibited as authorities try to prevent new virus outbreaks.

And while the actual date depends on the sighting of the moon, this year, it is believed that the festival will begin on May 23, and will continue till May 24.

Here are the highlights on moon sighting:

— According to Khaleej Times news, Eid will be celebrated on 24 May in most Muslim countries. Top leaders of Muslim countries including UAE have congratulated each other on Eid. The Gulf Cooperation Council has also announced to celebrate Eid on May 24.

— Delhi's Jama Masjid Shahi Imam Syed Ahmed Bukhari announced that Eid-ul-Fitr will be celebrated on May 25 as moon could not be sighted on Saturday. "It's important that we take precautions and maintain social distancing. We should stay away from shaking hands & hugging. We should follow govt's guidelines," he said.

— Moon not yet sighted in India. The wait for Muslims to know the day when they will celebrate continues.

Hon'ble Governor Shri Arif Mohammed Khan has greeted Keralites all over the world on the occasion of #EidUlFitr pic.twitter.com/uLbyy3DR1g

Sending you our warm wishes on this blessed occasion of Eid al-Fitr. #EidMubarak pic.twitter.com/hqKwhrZ2DN

—  In Fiji, gatherings of only up to twenty people are allowed as a precautionary measure to stop the spread of coronavirus.

—  Teele wali Masjid, one of the biggest mosques in Lucknow and the iconic Bara Imambara, also known as Asfi Mosque, also remained shut due to the pandemic.

— In Lucknow, markets wear a deserted look as senior Muslim clerics appealed people to stay indoors and ensure social distancing. The top clerics had asked people to use social media to greet each other on Eid.

—  On the occasion of Jumat-ul-Vida, the last Friday of the ongoing holy month of Ramzan, a select group of people offered namaz at Delhi's Jama Masjid ahead of Eid-ul-Fitr, while adhering to social distancing following relaxations in the fourth phase of the COVID-19 lockdown.

—  Shops in the area around Delhi's Jama Masjid await customers as their frequency falls amid lockdown.

Delhi: Shops in the area around Jama Masjid await customers, as their frequency falls amid #CoronaLockdown. Shopkeepers say "It's Eid day after tomorrow but shops are deserted. Very few customers are coming. There's the threat of COVID & the purchasing power of people is low now" pic.twitter.com/ULNrtfUSFW

—  The Eid prayer is similar to the dawn Fajr prayer in that it consists of two units, known as Rakats. The first Rakat, begins by raising your spread hands to your ears and give seven Takbeers of Allahu Akbar before reciting Surah Al Fatiha and another surah of your choice.

—  Islamic holidays follow the lunar calendar and not the Gregorian calendar. Muslims around the world fast and offer prayers and practice self-discipline. They make charity and give alms to the poor.

— While the day of Eid is determined by the sighting of the moon, the calendar holiday for Eid-ul-Fitr in India is on May 25. On this day, Muslims are forbidden from fasting. They wear new clothes, pray together, greet each other with hugs and wishes of Eid Mubarak and have a feast with their close friends and family.

— The moon was sighted in Kargil on May 22 so we are celebrating Eid in Ladakh today (May 23). Due to COVID-19 outbreak, we will be offering prayers at our homes, a Ladakh native told ANI.

Eid-ul-Fitr is being celebrated in Ladakh on May 23 amid coronavirus pandemic. Celebration of Eid will be different this year as large gatherings are prohibited and people have been asked to maintain social distancing.

— As Eid approaches, people wish for clear skies, because the sighting of the crescent moon indicates that the festival has officially begun. People then begin to dress up and start the feast.

— Eid-ul-Fitr is a special occasion for Muslims across the world as it marks the end of the fasting month of Ramadan. Apart from family gatherings, feasts and celebrations, congregational Eid prayers, offered about 20 minutes after sunrise makes it even more of a special occasion. Traditionally, Muslims gather in huge numbers in big mosques or grounds called Eid Mussallahs across the country to perform Eid prayers, which are led by an imam. 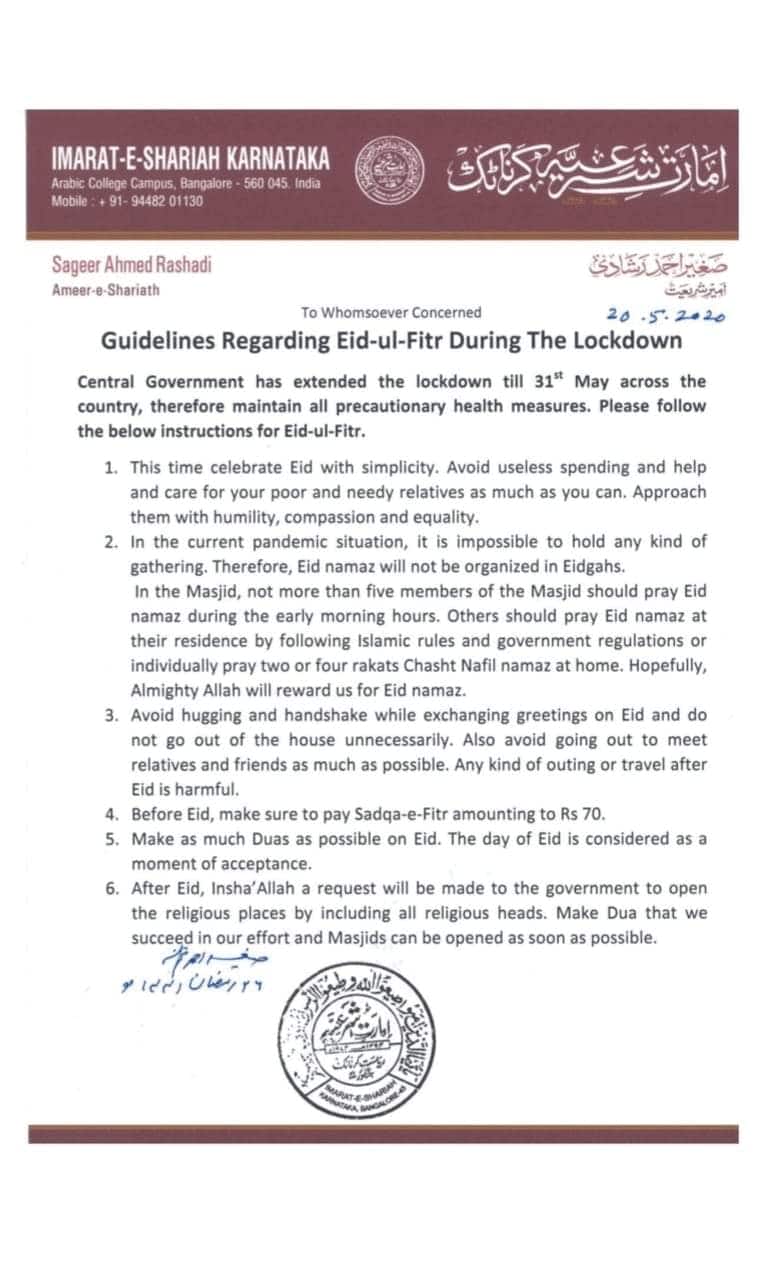 — Agra: The Rapid Action Teams of the police have been deployed in all sensitive areas, ahead of the Eid in the Taj City in Uttar Pradesh. Though the maulvis and maulanas have been appealing to the faithful to pray at home, and not to come out on the streets or throng mosques, the city administration is not taking chances.

— Apart from praying to Allah, exchanging gifts, relishing traditional delicacies and wishing each other ‘Eid Mubarak,’ the festival is also celebrated by offering zakat which is considered one of the five pillars of Islam. People contribute a part of their earning to charity as a gesture of equality in celebration.

— The Crescent moon has not been sighted in Saudi Arabia on Saturday, which means that India will celebrate the Eid-ul-Fitr festival on Monday, i.e. on May 25.

— In Indonesia, the largest Muslim-majority country, President Joko Widodo said restrictions would remain in place through the holiday. The country, with a population of 270 million, has reported more than 18,000 cases, including around 1,200 deaths.

Since the start of the Ramzan, the government has imposed an outright ban on 'mudik', a holiday tradition in which millions of Indonesians living in big cities flock to their hometowns to celebrate with relatives. Health experts had warned it could set off a wave of new cases.

— The Eid prayer at home is done in the same way as in mosques; however, there is no Khutba (sermon) being delivered by the Imam of the mosques. It's just like any normal daily prayer.

— In Egypt, authorities have extended the nighttime curfew, which will now begin at 5 pm instead of 9 pm, and halted public transportation until May 29. Shopping centers, malls, beaches and parks, which would ordinarily be packed, will be closed.

— In Jerusalem, most restrictions have been lifted but the Al-Aqsa mosque compound - the third holiest site in Islam will remain closed until after the holiday. Shopkeepers in the Old City, which has been emptied of tourists and pilgrims since March, are reeling from the effects of six weeks of lockdown.

— The prayers will not be performed at other mosques in Saudi. Muezzins will chant the Eid Takbeers (Arabic phrase Allahu Akbar) through loudspeakers from dawn till the Eid prayer time.

— Saudi Arabia has suspended congregation prayers in its mosques as part of strict precautions to curb the spread of the virus.

— Saudi: No worshippers will be allowed to attend Eid prayers in both sites of Mecca and Medina, as part of restrictions in place against the novel coronavirus, head of the presidency responsible for affairs of the two mosques Abdul Rahman Al Sudeis said.

— Saudi King Salman bin Abdulaziz approved holding Eid-ul-Fitr prayers on Sunday (May 24) at the two holy mosques in Mecca and Medina, without any worshippers.

— Thus Muslims will observe 30 days of fasting and Eid will be celebrated on May 24 (Sunday). With this, Saturday (May 23) will be the last day of Ramadan.

— The higher judiciary council of Saudi Arabia announced that the Eid moon will not be sighted today.

— The International Astronomical Center in UAE said last week that Eid al-Fitr was estimated on Sunday, May 24 across most Islamic countries in the world.

— A very few were seen on Kozhikode's SM street market ahead of Eid festival.

Kerala: People in less numbers were seen making purchases today at SM street market in Kozhikode ahead of Eid festival amid #COVID19 lockdown. Syed,a shop owner says, "There is less footfall now. Even though Eid festival is around the corner, there is only 10% sales due to COVID" pic.twitter.com/Qp8HQmJaHh

Today marks the end of Ramadan and the start of Eid celebrations for Muslims across the world. #EidMubarak #eidmubarak2020

The Earl and Countess of Wessex joined volunteers at @ShahJahanMosque on Thursday, where they helped pack food parcels and recorded this message. ___ pic.twitter.com/5OKkgjpFVg

— The Iranian President had last week announced that restaurants would reopen after Ramadan and sports activities would resume without spectators. Universities, but not medical schools, will reopen on June 6.

— Iran on Saturday moved to open businesses, religious and cultural sites as it eases restrictions imposed to contain the coronavirus pandemic. Museums and historical sites are to reopen on Sunday to coincide with the Eid el-Fitr celebrations that end the Muslim holy fasting month of Ramadan, President Hassan Rouhani said on state television.