Parts of Delhi on Tuesday witnessed widespread chaos and unruly scenes as security personnel were clearly outnumbered by the protesters. Other video clips showed protesters in the guise of farmers chasing away policemen on foot as well with tractors and trying to remove a DTC bus parked across the ITO road stretch by pushing it out of way with a tractor. 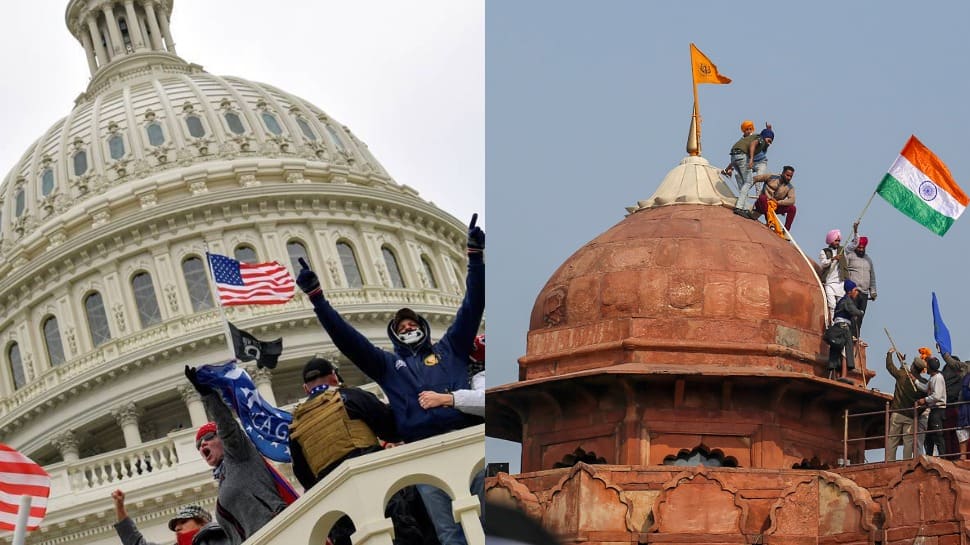 NEW DELHI: In an unprecedented development, hundreds of farmers protesting against Centre’s three farm laws swarmed the historic Red Fort on Tuesday as their "Kisan Gantantra Parade" turned violent at several places in the national capital.

A large group of farmers on tractors and riding motorcycles thronged the Red Fort carrying the tricolours, Khalsa flags and farmer union flags in their hands. The extremely annoying visuals aired on the national TV showed a group of farmers swarming the historic Red Fort even as hundreds of others played a “cat-and-mouse game” with the police personnel near the ITO intersection in central Delhi. 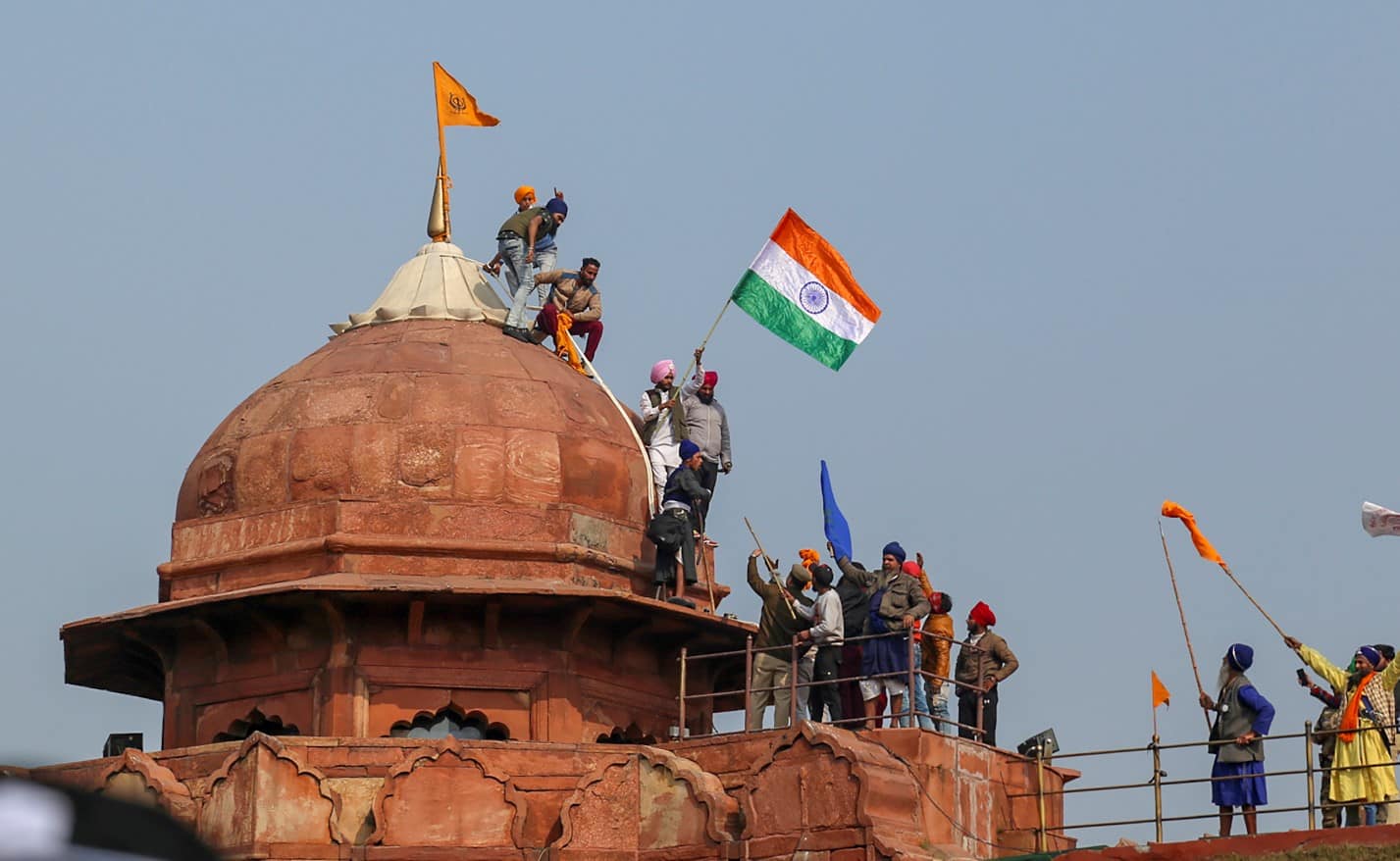 Parts of the national capital witnessed widespread chaos and unruly scenes as security personnel were clearly outnumbered by the protesters. Other video clips showed protesters in the guise of farmers chasing away policemen on foot as well with tractors and trying to remove a DTC bus parked across the ITO road stretch by pushing it out of way with a tractor.

A section of farmers had deviated from the designated route for the proposed tractor parade, and when they were intercepted by the police security personnel, they clashed with them, attacked the cops waving swords and dagger in their hands. The “extremely unfortunate and shameful” incident took place on the day when India witnessed a muted 72nd Republic Day celebrations overshadowed by the COVID-19 pandemic.

However, this whole incident gave a golden opportunity to the world media to deride the Narendra Modi government and showcase the police crackdown on the violent protesters as “anti-people, anti-poor and anti-farmer.’’

The visuals of protesting farmers and some 'Nihangs' (traditional Sikh warriors) entering the Red Fort and hoisting a flag from the staff from which Prime Minister unfurls the tricolour on Independence Day was compared with the recent attack on the Capitol Hill in the United States. 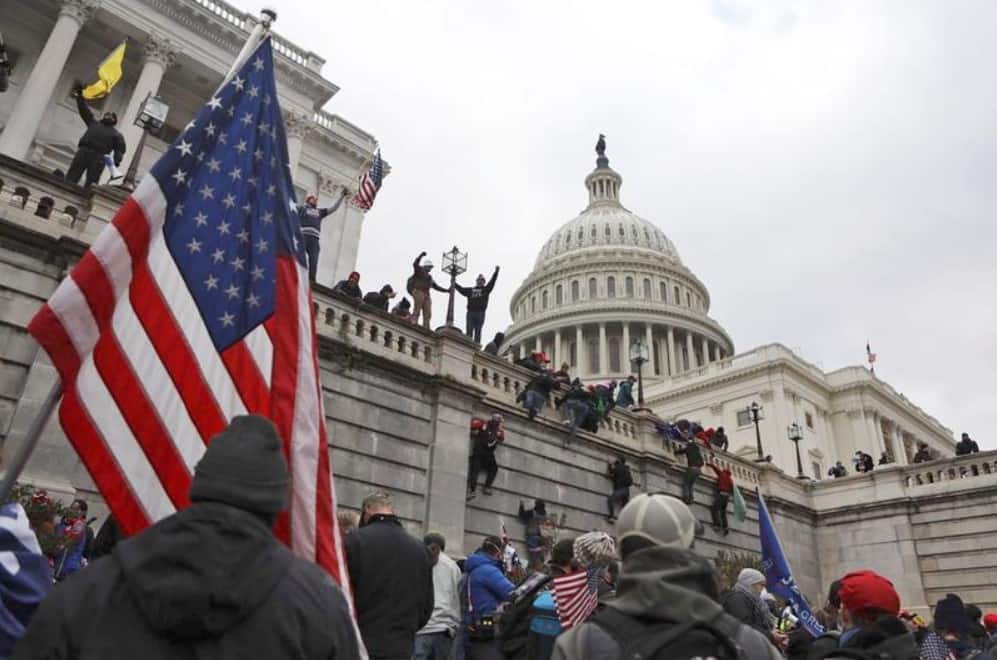 The riots and the attack on Capitol Hill by the Donald Trump supporters, which claimed at least 4 lives and led to arrests of over a 100 people, were then strongly condemned as an “attack on the world’s biggest democracy” and labelled as an “act of terrorism”, “attack on oldest democracy” by the US and the world media.

However, there was a stark contrast in the world media’s coverage of the seize of the Capitol Hill and the today’s tractor march in which the farmers were projected as “heroes” fighting for a real cause while the government was seen as “a ruthless regime trying to crush the farmers’’ movement by force.

What the world media failed to understand is the fact that the Government of India has already conceded and agreed to most of the key demands of the farmers. The Narendra Modi government, which is under constant attack from the opposition parties, has repeatedly assured that the Minimum Support Price (MSP) – a key demand of the agitators – will not be discontinued in the future.

But, despite sincere attempts and repeated appeals by the Modi government, the world media continues to show PM Narendra Modi as an “autocratic leader” and the NDA regime as “unrelenting and insensitive to farmers’ cause.”

The BBC, in its recent report on the farmers' ongoing protest, had highlighted how the Narendra Modi regime “misread the mood of India's angry farmers” and took the great risk of becoming unpopular due to its rigid stand and refusal to repeal the three farm laws.

The BBC report sought to know “why did Prime Minister Narendra Modi and his BJP government fail to anticipate the blowback to the laws and misread the public mood in the affected states of Punjab and Haryana?”

“Were they lulled into complacency because a Punjab-based ally initially supported the laws? (The Akali Dal later reversed its stand and quit the government.) Did the government believe that the laws would not lead to any significant erosion of popular support?” the BBC report sought to know.

BBC was not alone in bashing the Modi government. Reuters too reported how “Indian farmers protesting against agricultural reforms were lathi-charged” by the police which used tear gas to disperse them as they breached barricades and clashed with cops.

“Growers, angered by farm laws claim that the new laws help large, private buyers at the expense of the producers. They have camped outside New Delhi for almost two months, posing one of the "biggest challenges to Prime Minister Narendra Modi" since he came to power in 2014,” the Reuters reported.

"Modi will hear us now, he will have to hear us now," Sukhdev Singh, 55, a farmer from the northern breadbasket state of Punjab, was quoted as saying by Reuters as he marched past the barricades.

The New York Times, in its report on today’s tractor march by farmers and the subsequent violence and chaos that it unleashed in the national capital, said the “Indian farmers protest poses a direct challenge to PM Modi.’’

"Prime Minister Narendra Modi oversaw a lavish parade by the armed forces, but news broadcasters showed surreal scenes of Mr Modi saluting officers while chaos was breaking out in several parts of the city just a few miles away,'' the NYT report said. The NYT reported that the farmers who waved flags and taunted police officers, and were seen carrying swords, tridents, sharp daggers and battle-axes were largely "ceremonial weapons."

The US News also captioned its report "Indian Police Fire Tear Gas in Clash With Farmers on Republic Day" showing the law enforcement agencies in poor light. The world media, which sees “Modi as someone who has built a reputation for tough-talking and playing hardball with his critics and his party,’’ should learn to discriminate between the rioters and the peaceful protesters.

The world media needs to respect the fact that the three farm laws were passed after approval by the Indian Parliament and necessary ratification by the President of India. While it is true that the Narendra Modi government is caught on the wrong foot and public anger continues to grow, but the same goes with farmers too. They should also not behave like secessionists and refrain from violence. They should not give the impression of being a puppet in the hands of the anti-Modi brigade, which wants to gain political mileage from the farmers' agitation.

Similarly, the national opposition parties should also rise above petty politics and condemn the violence and chaos caused by the farmers and their firm refusal to budge. The people of India are not fools to understand the real motive behind the farmers' constant blackmail and theatrics to pressurise a democratically elected government.

Is your vehicle old and polluting environment? Be prepared to pay this tax in the near future