Indian Air Force (IAF) Air Chief Marshal BS Dhanoa and Wing Commander Abhinandan Varthaman on Monday flew sortie in MiG-21 fighter aircraft in Pathankot, Punjab. During the Pakistani counter-attack on India on February 27 in response to Balakot airstrikes, Abhinandan had shot down an F-16 of Pakistan Air Force from his MiG-21 Bison fighter.

Indian Air Force (IAF) Air Chief Marshal BS Dhanoa and Wing Commander Abhinandan Varthaman on Monday flew sortie in MiG-21 fighter aircraft in Pathankot, Punjab. They flew the MiG-21 jet a day before the induction ceremony of Boeing AH-64E Apache Guardian Attack Helicopters at the Pathankot Air Base. Abhinandan flew the MiG-21 for half an hour.

The trademark handlebar moustache of Abhinandan has been replaced and he donned a normal look. While Air Chief Marshal Dhanoa was the pilot, Abhinandan was the co-pilot. They flew in the MiG-21 Type 69 trainer aircraft. This was also the last sortie of the IAF Chief in a combat aircraft.

Wing Commander Abhinanadan had shot down an F-16 of Pakistan Air Force from his MiG-21 Bison fighter during the Pakistani counter-attack on India on February 27 in response to Balakot airstrikes by the IAF Mirage-2000 jets. The IAF Chief is also a MiG-21 pilot and had flown the planes during the 1999 Kargil War while commanding the 17 Squadron, during the war.

Wing Commander Abhinandan Varthaman, who was captured after his MiG-21 was brought down during the February 27 dogfight with Pakistani Air Force F-16s one of which he shot down, was conferred with Vir Chakra on the 73rd Independence Day.

The first batch of the Boeing AH-64E Apache Guardian Attack Helicopters, which is world's most lethal attack helicopter, arrived in India in July at the IAF Hindon Airbase in Ghaziabad. After a series of user trails, the Apache helicopters were sent to the Pathankot Air Base for a final induction into service. 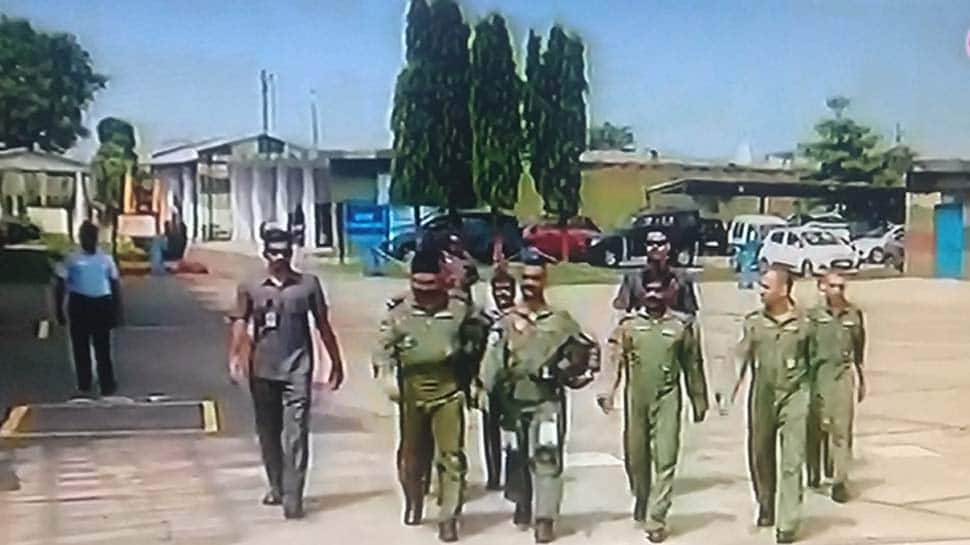 Wing Commander Abhinandan Varthaman was honoured for displaying exemplary bravery during the aerial conflict that occurred after India carried out an airstrike on Jaish-e-Mohammad terror camps in Pakistan's Balakot to avenge the February 14, 2019, Pulwama suicide bombing. He was in Pakistani custody for almost 60 hours and was released after India applied pressure on its western neighbour.

The helicopters will replace the Mi-35 choppers stationed in Pathankot. It also added that Group Captain M Shaylu will command the squadron.

The AH-64 Apache is used by the US Army and a number of defence forces of other countries. The helicopter is equipped with a 30-mm machine gun, which can fire up to 1,200 rounds at a time. Apart from this, it is also equipped with the anti-tank Hellfire missile, which is believed to be capable of destroying a tank. As an additional weapon, a Hydra Unguided Rocket, capable of perfect execution of any target on land, is also installed. The helicopter can fly at a speed of 150 nautical miles per hour, which helps it to reach the enemy at a tremendous speed in the air.