The UN Court on Wednesday stayed the execution of Kulbhushan Jadhav and ordered Pakistan to provide India consular access to him. 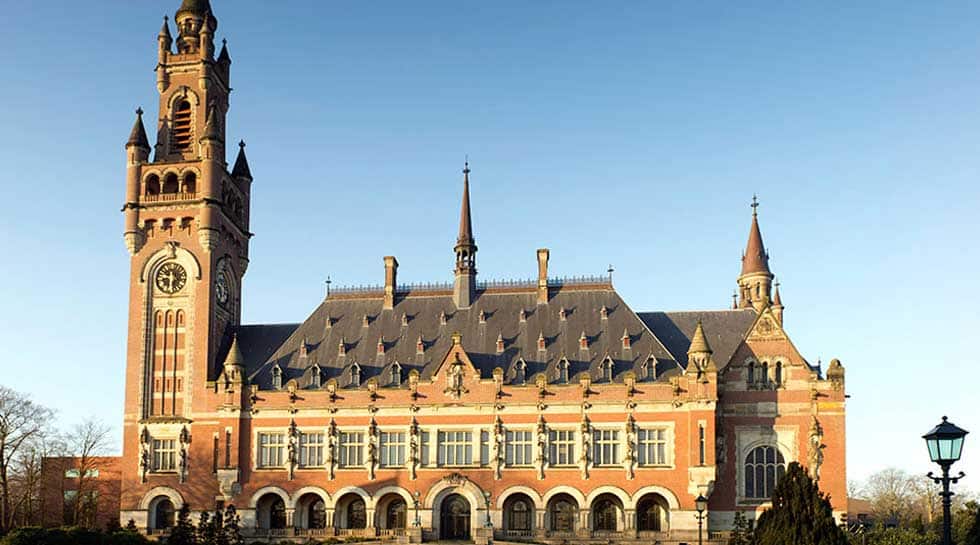 The Hague: In a big diplomatic victory for India, the International Court of Justice (ICJ) on Wednesday ordered Pakistan not to execute former Indian Navy commander Kulbhushan Jadhav, who has been awarded a death sentence by its military court on espionage charges.

The international court, while rejecting all objections raised by Pakistan, directed it to grant consular access to Jadhav "without further delay", while holding that it had "breached" the Vienna Convention by denying him this right.

The UN court maintained that Pakistan deprived India of the right to communicate with and have access to Kulbhushan Jadhav and thereby breached obligations incumbent upon it under Vienna Convention on Consular Relations. The ICJ further directed Pakistan to reconsider the sentence awarded to Jadhav by a military court.

The ICJ gave a detailed verdict on Wednesday, rejecting all the objections of Pakistan, including one unanimously on the admissibility of the case and also the claims by Islamabad that India had not provided the actual nationality of Jadhav.

In its judgement, the ICJ said that it was satisfied that Jadhav was an Indian national and that the fact had been acknowledged by both Pakistan and India. The court, in its ruling by 15-1 votes, ordered "a continued stay of execution" on Jadhav, saying it "constitutes an indispensable condition for the effective review and reconsideration of the conviction and sentence" of the accused.

It said that it "finds that the appropriate reparation in this case consists in the obligation of the Islamic Republic of Pakistan to provide, by the means of its own choosing, effective review and reconsideration of the conviction and sentence of Mr. Kulbhushan Sudhir Jadhav, so as to ensure that full weight is given to the effect of the violation of the rights set forth" of the Vienna Convention on consular access.

PM Minister Narendra Modi, several top politicians cutting across the party lines and legal experts welcomed the ICJ ruling in the case, which triggered celebrations in parts of the country.

The ICJ decision also came as a big reprieve for the friends and family members of Jadhav who are now confident of his release in Pakistan.

"We welcome the justice delivered by the ICJ at The Hague in favour of India. The court by a vote of 15-1 has upheld India`s claim that Pakistan is in egregious violation of the Vienna Convention on Consular Relations on several counts," MEA spokesperson Raveesh Kumar said at a press conference. "We also appreciate the direction of the ICJ that Pakistan should review and reconsider the conviction and sentence given to Jadhav by Pakistani military court," he added.

Kulbhushan Jadhav will remain in Pakistan, a victory for us: Pakistan FM

However, Pakistan Foreign Minister Shah Mehmood Qureshi on Wednesday claimed that the ICJ ruling on Kulbhushan Jadhav was a "victory for Pakistan" as the top UN court did not ask for him to be released.

"Commander Jadhav shall remain in Pakistan. He shall be treated in accordance with the laws of Pakistan. This is a victory for Pakistan," Qureshi tweeted.

The Pakistan Foreign Office in a statement said the fact that the ICJ did not ask Pakistan to release or acquit Jadhav meant that the UN court had "not accepted India`s plea" for his release.

The Foreign Office also said that Pakistan was a responsible member of the international community. "Having heard the judgement, Pakistan will now proceed as per law," the statement said.

It reiterated its accusations against Jadhav, that he "entered Pakistan without a visa on authentic Indian Passport with a fake name alias Hussain Mubarak Patel".

Jadhav, a former Indian Navy officer, was kidnapped by Pakistani agencies on March 3, 2016, from Iran where he was in connection with his business.

Pakistan had claimed that Jadhav was arrested from its restive province of Balochistan and labelled him as a spy. It notified India about it through a press release on March 25, 2016, 22 days after he was picked up.

Jadhav, who hails from Powai in Mumbai and is 49 years old now, was subjected to an opaque military trial, which sentenced him to death on April 10, 2017, even as Pakistan government kept rejecting India`s repeated pleas for consular access.

Earlier on May 18 this year, the UN Court had ordered a stay on Jadhav`s execution till the final verdict was delivered in the case.

India, while moving the world court on May 8, 2017, had rubbished Pakistan`s claim that Jadhav was a "spy" and sought the immediate suspension of the death sentence awarded to him and his release.

It had sought direction to the Pakistan government to annul the decision of the military court, failing which the ICJ should declare the sentence "illegal", being violative of the international law and treaty rights.

India had said Pakistan had resorted to a "brazen defiance" of the international law and provisions of the Vienna Convention which guarantee certain civil and political rights to a prisoner.

It contended that it was not informed of his detention until long and that Pakistan also failed to inform the accused of his rights.

It further told the ICJ, the principal judicial organ of the United Nations, that Pakistan, in violation of the Vienna Convention, denied India its right of consular access to Jadhav despite its repeated requests.

India told the ICJ that it learned about the death sentence against Jadhav from a press release.

On May 18, 2017, the ICJ asked Pakistan to "take all measures at its disposal" to ensure that Jadhav is not executed, pending its final judgment in the case.

In its order indicating provisional measures, which was adopted unanimously, the ICJ also stated that the Pakistan government shall inform it of all measures taken in implementation of that order.

Later in December that year, Pakistan allowed Jadhav`s mother and wife to meet him in a Pakistani jail, an event, which India said, "lacked any credibility".

India said the overall atmosphere of the meeting was "intimidating" as Jadhav`s mother and wife were not allowed to speak to him in their mother tongue Marathi and that they were forced to change their clothes. The wife`s shoes were not returned.

India has maintained that Jadhav was tortured in the Pakistani jail and an alleged "confession" was extracted from him through coercion.

Senior advocate Harish Salve, representing India during a public hearing on the case in the ICJ, said Pakistan had no clinching evidence against Jadhav.

SC to hear Ayodhya case on Thursday, may decide on day-to-day hearing