Kulbhushan Jadhav, 48, was sentenced to death on April 11, 2017 by a Pakistani military court on charges of espionage and terrorism. 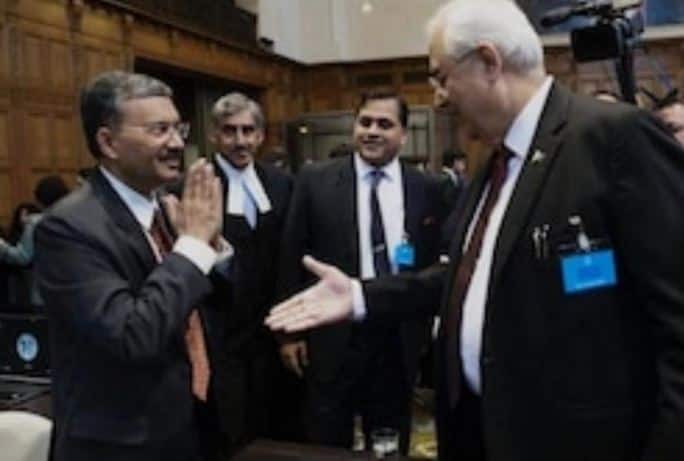 The Hague: In a gesture which clearly reflected the heightened tension between India and Pakistan following the Pulwama terror attack, members of the Indian delegation present at International Court of Justice (ICJ) for the hearing of Kulbhushan Jadhav case snubbed their Pakistani counterparts by refusing to shake hands with them.

The Indian side consisting of Joint Secretary heading the Pakistan Division in the External Affairs Ministry Deepak Mittal and India's Ambassador to the Netherlands Venu Rajamoney offered only a curt 'namaskar' to Pakistan's Attorney General Anwar Mansoor Khan when he showed interest in shaking hands with the Indian diplomats before the start of Jadhav's case hearing.

The efforts made by the Indian government yielded results as a 10-member bench of the ICJ passed an order on May 18, 2017, asking Islamabad not to execute Jadhav till the adjudication of the case.

India's former Solicitor General Harish Salve, who is representing Kulbhushan Jadhav at the ICJ, on Monday tore into Pakistan's military courts and the spying allegations against Jadhav during the first day of four-day public hearing in the case.

The proceedings at the International Court of Justice lasted for more than an hour before it got adjourned for Tuesday.

During the hearing, Salve accused Pakistan of rhetorics and of violating the Vienna Conventions. "Life of an innocent Indian is at risk. The credibility of a military court in Pakistan is clearly questionable as the legal system in the country is opaque. The country has no substantive defence and is only interested in anti-India propaganda," he said. "Pakistan has violated Vienna convention by denying consular access to Jadhav. There are only wanton allegations without any legal relevance," Salve added.