The death toll rose by a record 613, to reach 19,268 in the country, the Union Health Ministry said, and states like Assam and Karnataka imposed selective lockdown to check the rising infection. 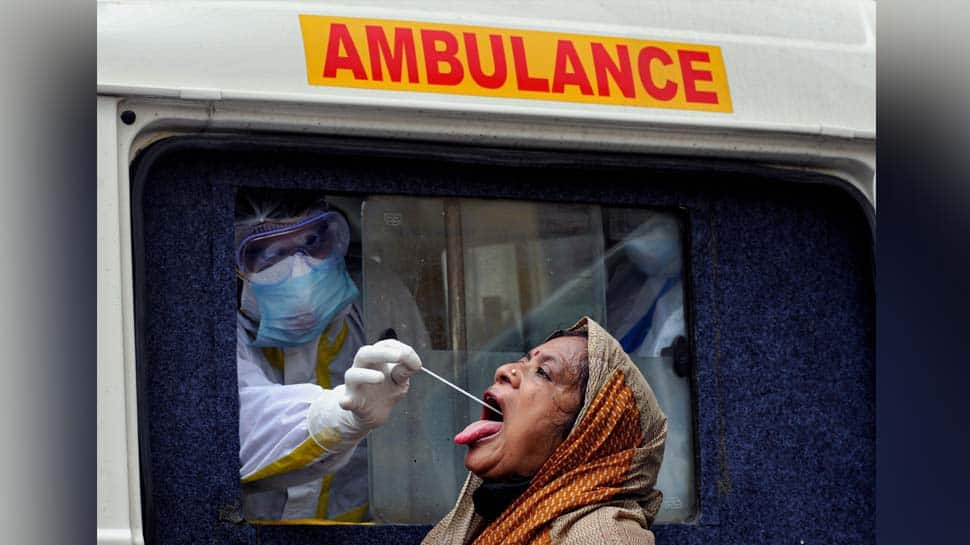 New Delhi: The Union Ministry of Health on Monday morning confirmed that the coronavirus COVID-19 cases in India reached 6,97,413 with 24,248 new positive cases and 425 deaths in the last 24 hours. With this, India has surpassed Russia as the third worst-hit country and several states recording their highest single-day spike. Currently, India has 253287 active cases, 424433 cured cases and 19,693 deaths.

The ministry data showed a record single-day surge of 24,850 coronavirus. The country has reported over 20,000 COVID-19 cases for the third day in a row. The states of Uttar Pradesh, Andhra Pradesh, Assam, Gujarat, Madhya Pradesh. Karnataka and West Bengal recorded their highest single-day jump in cases on Sunday.

Assam announced a two-week lockdown in Dima Hasao district from Monday the second district in the state after Kamrup Metropolitan, which primarily comprises Guwahati city, where it has been imposed. A two-week lockdown from June 28 to July 12 has been imposed in Kamrup Metropolitan. State Health Minister Himanta Biswa Sarma said that the COVID-19 situation in Guwahati, where 2,741 fresh cases were reported in the last 10 days, is alarming and may worsen if the restrictions imposed are not followed seriously by the people.

Karnataka has announced a full shutdown barring essential services on Sundays till August 2. Roads wore a deserted look, people stayed indoors and all commercial activities came to a grinding halt on the first such weekly shutdown. The state recorded 1,925 new cases and an aggregate of 23,474.

Amid the surge, the country is working to fast-track development of a vaccine, though experts have advised caution against racing through the process. The nod to conduct human trials for Indian COVID-19 vaccine candidates COVAXIN and ZyCov-D mark the beginning of the end of the coronavirus pandemic, according to T V Venkateswaran, who is a scientist with Vigyan Prasar.

"Now the nod given by the Drug Controller General of India, CDSCO (the Central Drugs Standard Control Organisation) for the conduct of the human trial for the vaccines, marks the beginning of the end," an article by him published on the websites of the Press Information Bureau (PIB) stated.

In the past years, India has emerged as a significant vaccine manufacturing hub and Indian manufacturers account for 60 per cent of vaccine supplies made to UNICEF. "The vaccine for the novel coronavirus may be developed anywhere in the world, but without Indian manufacturers involved the production of required quantities is not going to be feasible," the article said.

In the national capital, the 10,000-bed Sardar Patel COVID care centre, touted as "one of the largest" facilities in the world, was inaugurated. Also, Union Home Minister Amit Shah, Defence Minister Rajnath Singh along with Union Health Minister Harsh Vardhan and Delhi Chief Minister Arvind Kejriwal visited a newly-created temporary hospital with 1,000 beds, including 250 in the ICU, for COVID-19 patients.

The facility has been constructed in just 12 days near the Indira Gandhi International (IGI) airport on a piece of land belonging to the Ministry of Defence. The home minister said Prime Minister Narendra Modi is fully committed to helping the people of Delhi in these challenging times and this COVID hospital, yet again, highlights that resolve.

According to authorities, the national capital recorded 2,505 fresh coronavirus cases on Sunday, taking the tally to 99, 444 in the city, while the death toll from the disease mounted to 3,067. Maharashtra's COVID-19 tally rose to 2,06,619 after a single-day spike of 6,555. With the death of 151 more patients, the state's fatality count rose to 8,822, according to state authorities.

Tamil Nadu reported over 4,000 fresh cases for the fourth straight day, taking the tally to 1,11,151, while 60 people succumbed to the virus, pushing the toll to 1,510, the state Health Department said. AIADMK MLA from Coimbatore tested positive for coronavirus, the fifth ruling party legislator to contract the virus.

Four DMK MLAs, including J Anbazhagan who had died, had also tested positive for COVID-19. Uttar Pradesh reported a record 1,153 coronavirus cases, pushing the tally to 27,707, while the death toll in the state reached 785 with 12 fresh fatalities, officials said. Andhra Pradesh recorded a new single-day high of 998 fresh COVID-19 cases on Sunday taking the overall tally to 18,697.

In Kerala too, a rise in cases has heightened concern among authorities. "It's like we are sitting on top of an active volcano which can burst anytime. Just because there has been no community spread till now doesn't mean it will not occur," state Tourism Minister Kadakampally Surendran said here on Sunday, referring to the COVID-19 situation in capital Thiruvananthapuram. Surendran said the restrictions in force in containment zones would be tightened.

Kerala on Sunday reported second-highest single-day rise of 225 COVID-19 cases, including seven jawans of an Army unit in the state, taking the total to 5,429, the government said. Gujarat reported 725 new coronavirus cases, its highest single-day rise, taking the overall count to 36,123, while in Madhya Pradesh, 326 more people tested positive and its tally rose to 14,930. Odisha's COVID-19 tally has crossed the 9,000 mark with 469 fresh cases, while two more fatalities due to the infection pushed the death toll to 36, a health department official said.

According to officials, 60.77 per cent of the patients have recovered so far in the country. According to the Indian Council of Medical Research (ICMR), a total of 97,89,066 samples were tested for the disease in the country till July 4, with 2,48,934 of those tested on Saturday.

The COVID-19 death toll reached 288 in Telangana, 260 in Haryana, 218 in Andhra Pradesh, 162 in Punjab, 127 in Jammu and Kashmir, 89 in Bihar, 42 in Uttarakhand, 34 in Odisha and 25 in Kerala. Jharkhand has registered 17 deaths due to the disease, Chhattisgarh and Assam have reported 14 each, Puducherry has recorded 12, Himachal Pradesh 11, Chandigarh and Goa have registered six each and Meghalaya, Tripura, Ladakh and Arunachal Pradesh have reported a fatality each, according to ministry. More than 70 per cent of the deaths were due to comorbidities, it said.