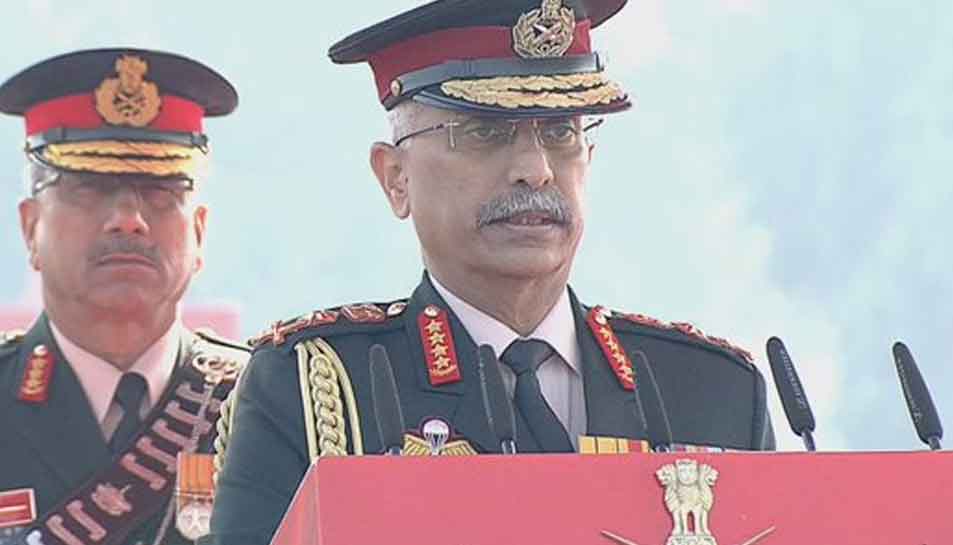 NEW DELHI: In a stern warning to Pakistan, Indian Army Chief General Manoj Mukund Naravane on Wednesday said that the country's armed forces will continue their policy of ''zero tolerance'' towards terrorism and that they are ready for any future warfare. Speaking on the occasion of 72 Army Day celebrations, Gen Narvane said, ''The Indian Army is ever vigilant and keeping an eye on global developments. We will continue to stick to our policy of zero tolerance towards terrorism and cross-border infiltration emanating from the neighbouring country.''

''There are many alternatives for dealing with terrorism and the Indian armed forces are fully prepared to thwart any challenge,'' Gen Naravane said.

In his first speech on the Army Day, Gen Naravane said the soldiers are the strength of the armed forces. Adding that India has “zero-tolerance” for terrorism, Army Chief said that the borders are strongly guarded and that India is ready for any future warfare.

The Army Chief congratulated the armed forces and their families on the occasion of Army Day. Saluting the soldiers for their valour, 'supreme sacrifice' and selfless devotion, chief Naravane said, "The Indian Army is taking rapid steps with regard to 'technological embrace' and 'indigenisation'. We shall continue to do all that we can to uphold our core values and ethos as also to live up to the trust reposed in us."

The warning from Gen Naravane came on the occasion of 72nd Army Day. Gen Naravane also reviewed the annual parade at the Cariappa Parade Ground in New Delhi. He also presented gallantry and other awards to his personnel.

Taking to Twitter, PM Modi wrote, ''Our Army is known for its valour and professionalism. It is also respected for its humanitarian spirit. Whenever people have needed help, our Army has risen to the occasion and done everything possible! Proud of our Army.''

The PM also posted a video of Army personnel rescuing an expecting mother and said, ''I pray for the good health of Shamima and her child.''

Defence Minister Rajnath Singh also extended his greeting to the Indian Army personnel on the occasion of Army Day, 2020.

Army Day: What is the significance, history

Every year, the Indian Army celebrates the Army Day on January 15. It is because, on this day in 1949, the Indian Army got its first chief. Lieutenant General KM Cariappa took over as the reins of the armed force as first Commander-in-Chief of the Indian Army from General Sir Francis Butcher, the last British Commander-in-Chief of India. The Army Day is celebrated at all Army Command headquarters in order to honour the soldiers of our country who have set the greatest example of selfless service and brotherhood and more than anything the love for the country.

The annual parade is held at the Cariappa Parade Ground in New Delhi to mark the event. The parade is reviewed by Indian Army Chief. He also presents gallantry and other awards to Indian Army personnel.