Security has been heightened across the capital and the police is ensuring that citizens do not break quarantine laws, besides helping distraught citizens to cope with the 21-day lockdown announced to halt the spread of COVID-19. 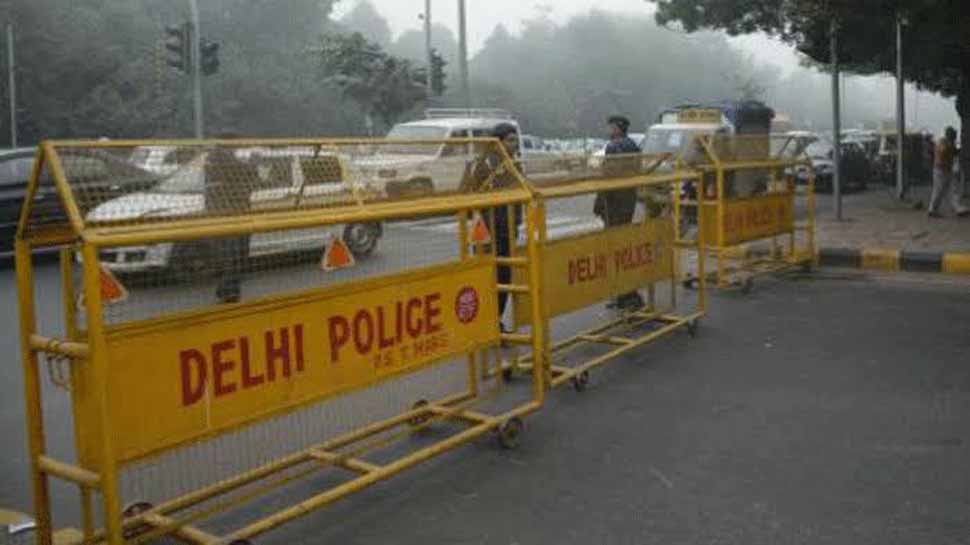 "A reliable inputs indicate that the police personnel deployed at various pickets, barricades in Delhi in connection with maintaining of law and order in Delhi during the COVID-19 duty may be targeted by suspected ISIS operatives," according to the communication issued on Tuesday night (March 31).

The secret message stated that "said attacks may be in the form of Lone Wolf attack like stabbing, firing or ramming the pickets with a vehicle," adding "Field staff may be briefed accordingly and pickets may be reinforced with morchas and extra firepower in view of the above input." 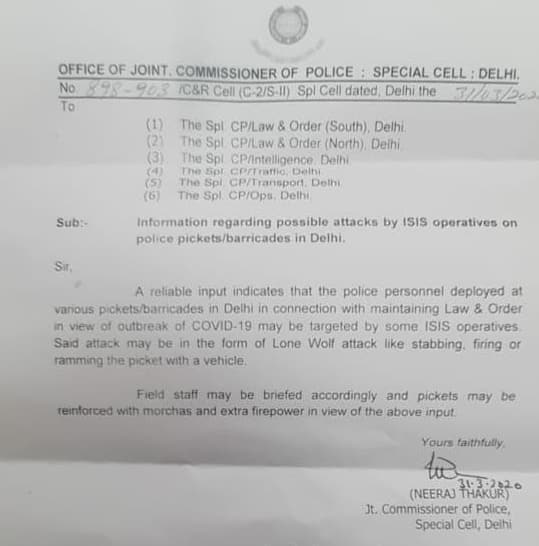 Security has been heightened across the capital and the police is ensuring that citizens do not break quarantine laws, besides helping distraught citizens to cope with the 21-day lockdown announced to halt the spread of COVID-19.

Delhi Police has also been ordered to track mobile phones of people under home quarantine to check their movement and ensure no violations. Chief Minister Arvind Kejriwal said the tracking was being done to ensure people do not violate the quarantine and also identify how many people they contact.

"The chief minister also said a total of 120 positive cases for coronavirus have been reported in the national capital till Wednesday morning," he said, adding that of the total 766 people admitted to the hospitals of Delhi due to Corona, 112 have tested positive and the rest are possibly infected and are being tested.

About the Nizamuddin Markaz (Tablighi Jamaat) case he said, "536 people, out of 2346 who were brought out of Markaz, have been admitted to hospitals and 1810 people have been put in isolation/quarantine."

According to the Ministry of Health and Family Welfare, the total number of COVID-19 positive cases has jumped up to 1637 in India, including 1466 active cases, 133 cured/discharged/migrated people and 38 deaths.

Notably, Prime Minister Narendra Modi will hold a video conference with all chief ministers on Thursday during which issues like ways to contain the spread of COVID-19, movement of migrants and contact tracing of Tablighi Jamat participants are likely to come up for discussion.

According to reports, contact tracing in several states is underway to identify, quarantine and test all the people who attended a gathering of almost 4,000 people in Delhi's Markaz Nizamuddin in mid-March.

In the last 24 hours, India has registered 386 new cases of COVID-19, taking the tally to 1,637 in the country, according to the government. The sharp increase in number of cases is due to the Tablighi meet at Nizamuddin which has become the new epicentre of the COVID-19 pandemic in the country --from Kashmir to Tamil Nadu.