Jammu and Kashmir: Fifth phase of DDC election ends with over 51% voting

The voting for the fifth phase of District Development Council (DDC) election in Jammu and Kashmir took place across 37 seats. 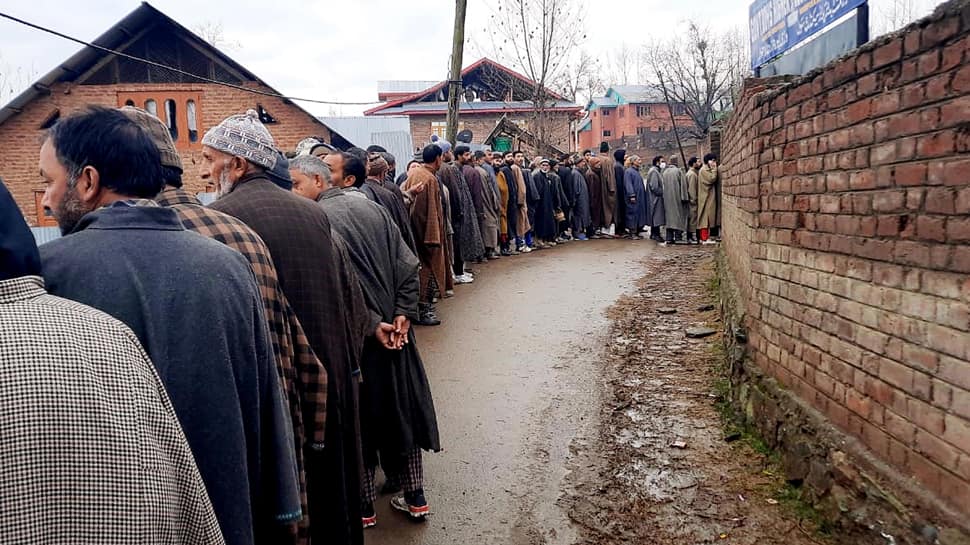 The fifth phase of District Development Council (DDC) election in Jammu and Kashmir ended on Thursday with 51.2 per cent voting. The voting across 37 seats passed off peacefully across Jammu and Kashmir, said State Election Commissioner (SEC) KK Sharma.

The voting for sixth phase will take place on December 13.

Jammu division recorded an average voter turnout of 66.67 per cent with Poonch District recording the highest percentage of 71.62 per cent followed by Doda district with 70.95 per cent and 70.83 per cent voting recorded in Rajouri district, while the lowest turnout in Jammu division was in Jammu district which recorded 60.24 per cent.

Besides, Kashmir Division recorded 33.57 per cent average voter turnout with Bandipora district recording the highest polling at 56.40 per cent followed by Kupwara District at 52.35 per cent and Budgam with around 45.65 per cent polling.

Giving district-wise details, SEC informed that in Kashmir Division the polling percentage recorded in Ganderbal was 37.47 per cent, Baramulla 44.31 per cent, Anantnag 21.89 per cent, Kulgam 26.94 per cent, Pulwama 8.12 per cent and 5.52 per cent polling was registered in Shopian.

The SEC said that a large number of people came out to cast their votes during this phase of the election. The SEC said that polling was peaceful and people participated enthusiastically despite severe cold conditions in the Kashmir division and some hilly areas of the Jammu division.

The DDC election is being held in eight phases and will continue till December 19. The counting of votes will take place on December 22. The elections are the first being held after the abrogation of Article 370 and the reorganisation of the erstwhile state of Jammu and Kashmir.

IMA declares nationwide shutdown on Friday; know what medical services will be affected