Karnataka BJP chief BS Yeddyurappa said that Monday will be the last day of the Kumaraswamy government. 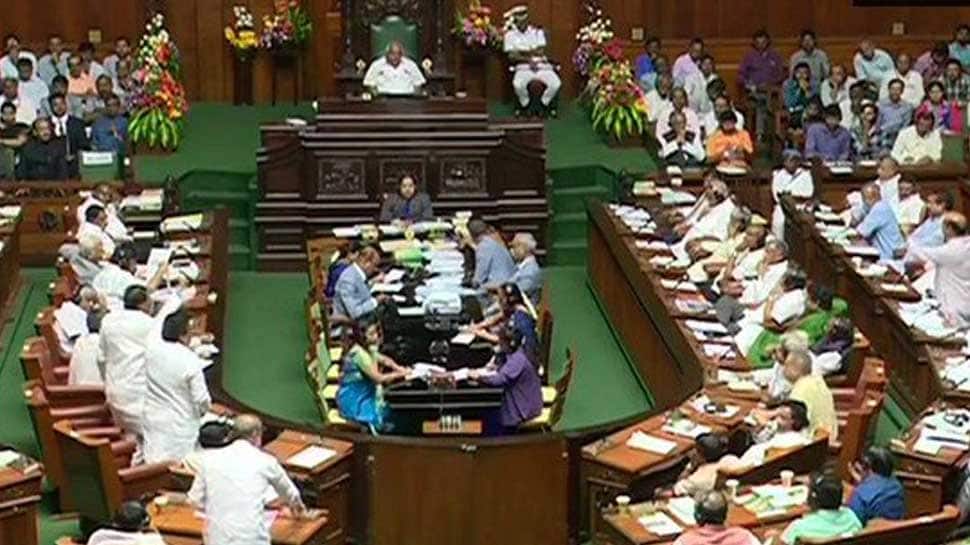 Bengaluru: The Karnataka Assembly on Friday failed to meet two deadlines set by Governor Vajubhai Vala for holding the trust vote after Chief Minister HD Kumaraswamy challenged the directive and the Speaker KR Ramesh Kumar adjourned the House till Monday.

The trust vote will now be held on Monday, July 22 with the ruling Congress-JDS coalition leaders claiming that a number of MLAs were still there to participate in the debate on the confidence motion moved by Kumaraswamy on Thursday.

Speaking to media after the debate, Karnataka BJP chief BS Yeddyurappa said that Monday will be the last day of the Kumaraswamy government.

"It was confirmed that the HDK (Kumaraswamy) government doesn't have the numbers. Governor has told for the third time to move trust vote. They have wasted time by giving more time to MLAs to speak. Monday will be the last day for the Kumaraswamy government. They don`t have numbers and they are not allowing those who have numbers to form a government either," he said.

BJP Karnataka President,BS Yeddyurappa: Monday will be the last day for HD Kumaraswamy govt, they don't have numbers & they aren't allowing the people who have numbers to form govt. We are 106 members totally. SC has said MLAs who are in Mumbai can't be forced to attend session. pic.twitter.com/LFUpQxiUS7

Yeddyurappa continued, "Yesterday, we slept here for the whole night to give a message to the world. The MLAs who are in Mumbai have been told by the Supreme Court that they can`t be forced to attend the session. We are 106 members in total. They are postponing (trust vote) intentionally."

Karnataka BJP said in a tweet that ''The reality of Congress and JDS was at full display in the last 48 hours. Karnataka has watched how these two political parties wasted tax-payers' money by deliberately wasting precious time of the session at Vidhana Soudha. Karnataka will never forget nor forgive this act.''

Karnataka will never forget nor forgive this act.

Leaders of ruling and opposition parties locked horns during the day-long debate on the confidence motion moved by Kumaraswamy.

Intervening in the debate, he said, "I heard what Madhuswamy (BJP MLA) said. I have raised some issues in the preliminary submission that I will need time to speak after all the members have spoken. I appeal to you (Speaker) to allow members to speak. Please reconvene on Monday and let`s finish it then."

Echoing a similar view, JDS leader GT Deve Gowda said, "Questions have been raised about the coalition government and its members. Madhuswamy has said we should finish now but at no time in the past has the governor intervened in this manner. Hence, if this discussion takes another day then it will not be asking for too much."

However, BJP leader Suresh Kumar was of the view that the sanctity of the motion would be lost if postponed.

"Let this not be like the budget where we discuss over 4-6 days," he said.

"In the matter of our MLA's kidnap, I haven't spoken today. Yes, we have failed in protecting our MLA," he said.

To this, Speaker KR Ramesh Kumar said, "I will not take this into cognisance.''

Before adjourning the Assembly, the Speaker said, "I am reiterating my appeal that this should end today. Please let me know how many people will speak and how much time you will take."

However, the House was adjourned till Monday, following many arguments in the Assembly.

State Home Minister MB Patil said, "You had directed me to give you a report on Shrimant Patil. The police have taken a statement from his family and they have said he has gone voluntarily. Our police team that went to the hospital was not allowed to enter and the MLA also did not wish to meet them."

"We will give you all the cooperation to wind up by Monday. As there`s a long list of members waiting to speak, it may warrant till Tuesday, which you may not agree. So Monday it can be winded up," he added.

While seeking time till Monday to prove majority on the floor of the Assembly, Congress leader Siddaramaiah said, "My suggestion is that opposition and Governor want the discussion to finish today but it will be wrong to deny a chance to the members to speak. We do have instances of four-five days such proceedings continued. We will prepare the list of orators afresh. The coalition government not running away, division of votes has to take place. So by Monday, we will finish it. Please allow us to finish by Monday."

"The Governor and BJP are saying it has to be finished today. But you cannot infringe on the rights of members. Nowhere has it been written that the vote should be finished in one day. There are many instances where the matter has gone over many days. The chief minister has already said that it should be taken on Monday. Once the chief minister speaks after all members it has to be put to the vote."

Meanwhile, Yeddyurappa, who was also present in the Assembly said, "We respect you, Speaker Sir. The Governor's last letter said that the vote should finish today. Today will go on till 12 am. I appeal to you; people on our side will sit peacefully till late in the night. Let it take however long and it will also mean that we can respect the Governor`s direction."

Interrupting Yeddyurappa, Karnataka Minister and son of JDS chief HD Deve Gowda, H D Revanna retorted, "This is not a rail budget. It was the BJP that did not come to the business Advisory committee meeting last Friday. They should have come then if they wanted it to be taken up soon."

As the House resumed proceedings in the morning, the Governor shot off a missive to the Chief Minister to prove his majority by 1:30 PM.

There was a lot of debate on the directive itself and in the midst of the uproar, Speaker Ramesh Kumar adjourned the House till 3 PM.

This was followed by another directive from the Governor that the confidence vote business should be completed by 6 PM.

Intervening in the debate, Kumaraswamy virtually ruled out proving his majority in the Assembly by the second deadline set by the Governor, when he sought protection from the Assembly Speaker in the matter.

He said the "second love letter" sent by Vala asking him to prove majority in the Assembly before 6 pm today hurt him and asked him whether he came to know of horse-trading only now.

The Chief Minister also moved the Supreme Court challenging the Governor`s directive to the government saying it was in violation of well-settled law laid down by the court.

He and Karnataka Pradesh Congress Chief Dinesh Gundu Rao challenged in the apex court its July 17 order which they contended fettered the political parties` right to issue a whip to its MLAs to attend the proceedings of the House in the confidence motion. They were seeking clarification on the July 17 order which allowed the 15 rebel MLAs now holed up in a Mumbai hotel the freedom to participate or not.