KCR has laid the foundation stones for a new Assembly and Sectratiate buildings but critics have slammed him for a number of reasons ranging from wasting public money to destroying historically vital sites. 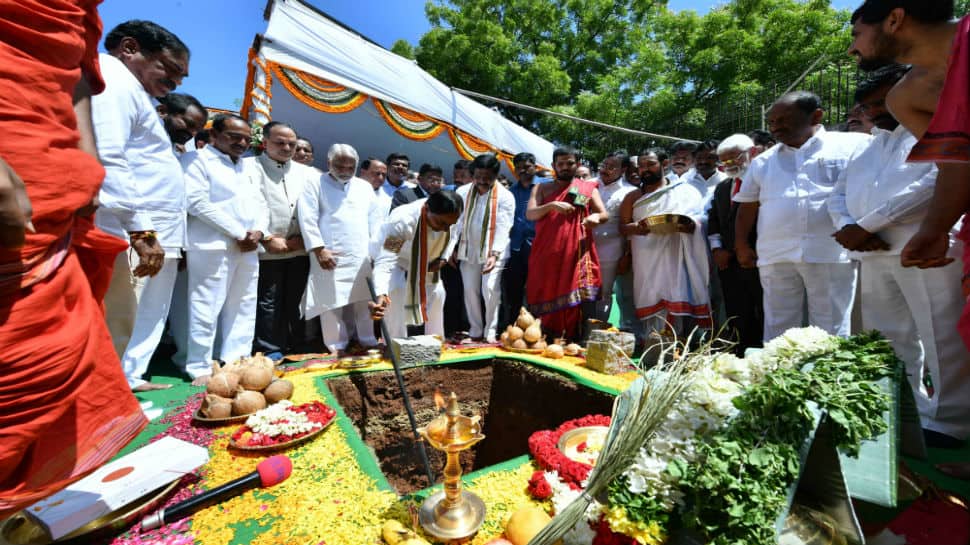 Hyderabad: Since becoming the Chief Minister of Telangana in 2014, Kalvakuntla Chandrashekar Rao (KCR) has never settled for anything less than 'grand' when it comes to conceptualising and constructing structures. Be it the Kaleshwaram irrigation project or Yadadri Temple, he has ensured every such structure has his very own stamp of grandeur.

KCR's latest fascination is the construction of brand new buildings to house the Secretariat and the Assembly.

On Thursday, he laid foundation stones both for the new Assembly and Secretariat buildings. While the new Secretariat building will be built on the existing Secretariat premises facing the famous Hussain Sagar Lake, the Assembly will shift from the iconic heritage structure built by the sixth Nizam of Hyderabad to Errum Manzil in Khairatabad, the heart of the city.

KCR, however, is facing severe criticism as hundreds of crores of rupees will be spent on constructing these two buildings.

A Public Interest Litigation (PIL) was filed earlier on Thursday as the foundation stones were being laid in the Telangana High Court, by PL Vishweshwara Rao, former Dean at Osmania University. "This Chief Minister wants to go down in history as a great man. He is squandering public money at a time when health, agriculture and education sectors are in bad shape in the state of Telangana," he said.

KCR is also receiving flak for following vastu in everything he does. It is a known fact that he never used to come to the existing Secretariat due to vastu reasons and used to function from his home 'Pragati Bhavan' on which crores were spent to make it vastu compliant. "It's madness of vastu. KCR has lopsided priorities. He is wasting public money in the name of vastu. Many of the government school buildings, hospital buildings are in dilapidated conditions he should take care of them first," charged Sravan Dasoju, spokesperson, Telangana Congress.

For the new Assembly building, KCR's decision of the site on Errum Manzil heritage building premises has not gone well with the Nawab Fakhrul Mulk Legal Heirs Association. Nawab Fakhrul Mulk was the one who had built Errum Manzil during the Nizam era. "We feel that the heritage structure built 150 years ago by our great grandfather should not be dismantled. This building has its own history wherein dignitaries from around the world used to visit before independence," informed Nawab Syed Ali Shehreyar, great-grandson of Nawab Fakhrul Mulk.

Even several retired IAS officers are of the opinion that it is not a correct decision. "This might not be the correct decision. The Nizam era buildings, especially in Secretariat which were structurally not sound, were demolished during NTR and Chandrababu period and the new ones built are structurally sound and functionally useful. And now after new Andhra Pradesh YSRCP government handed over their portion, there is lot of space to house HoDs as well," according to IYR Krishna Rao, a retired IAS officer.

Meanwhile, KCR is very keen that the construction of both Assembly and Secretariat buildings should be completed in the next couple of years.