Slamming how military courts in Pakistan function, India has said it is a clear violation of Vienna Convention that consular access to Kulbhushan Jadhav was repeatedly denied. 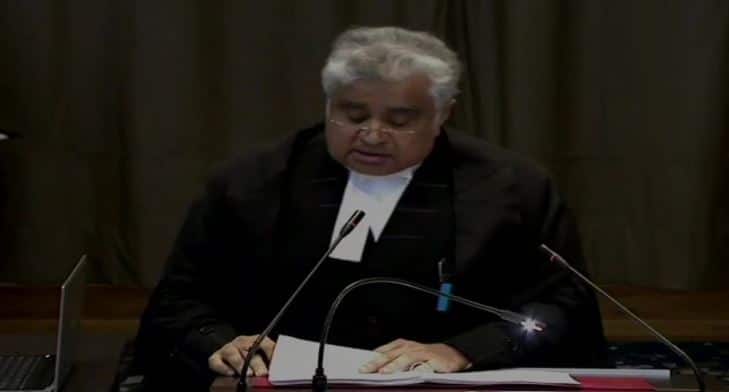 The Hague: Representing Kulbhushan Jadhav - wrongly imprisoned in Pakistan on espionage charges - at the International Court of Justice, Harish Salve tore into the country's military courts and the allegations against Jadhav.

The proceedings at ​the International Court of Justice lasted for more than an hour before it got adjourned for Tuesday.

During the hearing. Salve accused Pakistan of rhetorics and of violating Vienna Conventions, Salve led a systematic attack in his defence of Jadhav. "Life of an innocent Indian is at risk. The credibility of a military court in Pakistan is clearly questionable as the legal system in the country is opaque. The country has no substantive defence and is only interested in anti-India propaganda," he said. "Pakistan has violated Vienna convention by denying consular access to Jadhav. There are only wanton allegations without any legal relevance."

Highlighting that Jadhav has been subject to torture in the three years inside Pakistani jails, Salve then questioned Pakistani documents presented in a bid to frame him. "Pakistan registered an FIR after Jadhav was detained. There is no clarity about when Jadhav was detained. He was not even informed that he has right to consular access. India's 13 reminders were sent on various dates.  They were ignored."

Salve stressed that Pakistan has no substantive defence and Islamabad has even failed to divulge fundamental details of the so-called offence. Salve remarked that issues raised by Islamabad have no relevance at all. "Pakistan story was always strong on rhetoric and weak on facts,” he added.

"There is no manner of doubt that Pakistan was using this as a propaganda tool. Pakistan was bound to grant consular access without delay. On 30th March 2016, India reminded Pakistan of its request of consular access (for Jadhav) and received no reply. 13 reminders were sent by India on various dates,” Salve said.

Stressing that Pakistan is bound to give consular access to India without any further delay, it failed to disclose the date of detention as well. "No document of Jadhav’s trail was given to India. Despite repeated attempts for immediate consular access Pakistan has not done that so far," remarked Salve.

Salve said at ICJ that Jadhav was not informed of his rights by Pakistan and the FIR in this case was filed almost a month after Jadhav's arrest.

Salve went on to say that India has no information of what happened to Jadhav in Pakistan. He slammed Pakistan for not honouring bilateral treaties. Pakistan was reminded by India that it hasn't ratified Shark convention on legal assistance in criminal matters.

Ex-solicitor general Salve outlined two broad issues in the Kulbhushan Jadhav case. He said that first issue relates to the construction of Article 36 of the Vienna Convention and the second issue relates to relief.  Salve went on to say that Restitutio in integrum is a basic principle.

Tearing apart Pakistan's defence with his arguments, Salve said in ICJ that a substantial explanation was needed from Pakistan on why it needed 3 months for providing consular access to Jadhav, upon which it could've claimed that it has complied with treaty obligation. He added that even on erroneous premise that para 4 applies, Pakistan has failed to comply to treaty obligations.

Salve said that if article 36 grants rights of consular access in all cases including where allegations of such kind are leveled, then demanding those can't be term an abuse of those rights, ANI reported.

Salve also the ICJ that there was nothing to suggest that providing consular access in Jadhav case would have hampered investigations. Commenting on Jadhav’s trial by military court, Salve said that the trial fails to satisfy even minimum standards of due process and it should be declared “unlawful”.

"In just two years, military courts in Pakistan have been allowed to convict civilians and 161 civilians have been given death sentence in an opaque manner," Harish Salve added.

Salve also invited the ICJ to keep in mind the relief to be granted in the backdrop of the fact that Jadhav's trial has been conducted by a military court.

In a direct attack on Pakistan, Salve said that Pakistan's conduct doesn't inspire confidence that Jadhav will get justice there. He said that Pakistan is portraying an Indian National as a terrorist and an Indian agent, who was creating unrest in Balochistan. Salve alleged Pakistan of using Jadhav to build a narrative against India.

"India invites court to restrain Pak from acting on conviction on ground that it was secured by means which was in violation of Article 36 of Vienna Convention&in the present case,relief of review&re-consideration would be highly inadequate,considering facts&circumstances," Salve added.