Leave India yourself or get thrown out in MNS style: Posters threatening Bangladeshi infiltrators put up in Mumbai's Panvel

The posters, threatening the illegal Bangladeshis residing in Mumbai, bear pictures of MNS chief Raj Thackeray and his son Amit. 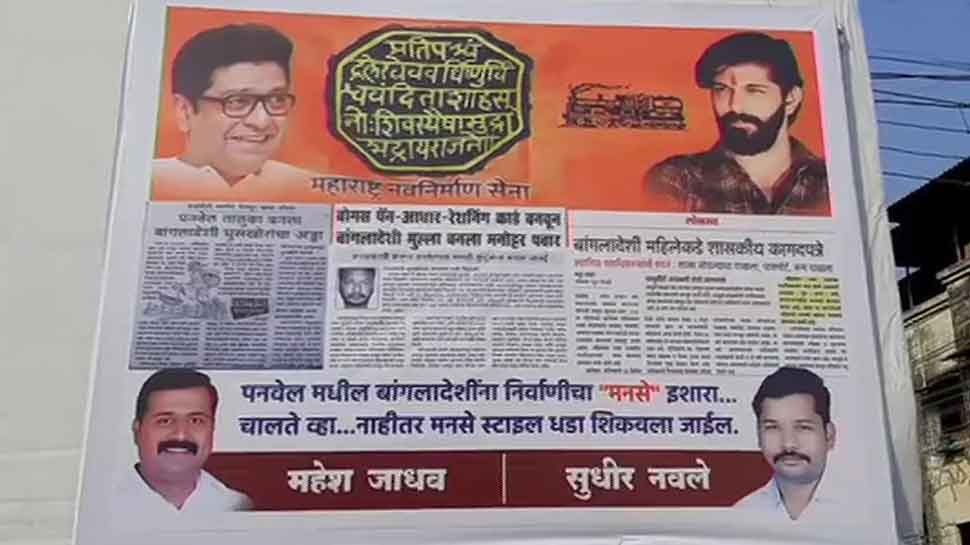 New Delhi: Days after Maharashtra Navnirman Sena (MNS) chief Raj Thackeray announced its support to the Narendra Modi-led government in the Centre over the eviction of illegal Bangladeshi and Pakistani infiltrators, several MNS posters, asking the 'Bangladeshi intruders' to leave India, surfaced in Mumbai Panvel area on Tuesday (February 4). The posters come ahead of MNS' proposed massive rally against illegal intruders on February 9.

Reading, "Bangladeshis leave the country lest you will be driven out in MNS style", the posters carry pictures of MNS chief Raj Thackeray and his son Amit Thackeray, who was recently inducted into the party.

In December last year, Raj Thackeray had said that the illegal immigrants from Pakistan and Bangladesh should be thrown out of the country irrespective of their religion. He had said that the Citizenship (Amendment) Act is uncalled for as it will increase the burden on India which is allegedly not able to cater to the needs of its own people.

"India is not Dharamshala. People coming from Bangladesh and Pakistan should be thrown out. India had not taken the contract of humanity," Raj Thackeray had said while addressing a press conference in Pune.

As per the reports, there has been speculation that the BJP will support Raj Thackeray in rebranding his party after the Uddhav Thackeray-led Shiv Sena joined hands with the Congress and NCP to form a government in Maharashtra.

Is it a ploy to please your lover: Tejashwi Yadav flays Nitish Kumar for sharing dais with Amit Shah