An on-duty policeman was thrashed by lawyers on Monday outside Delhi's Saket Court. One of the lawyers was also seen slapping the policeman, who was on a bike and as he prepared to leave the spot, his bike was hit with a helmet. 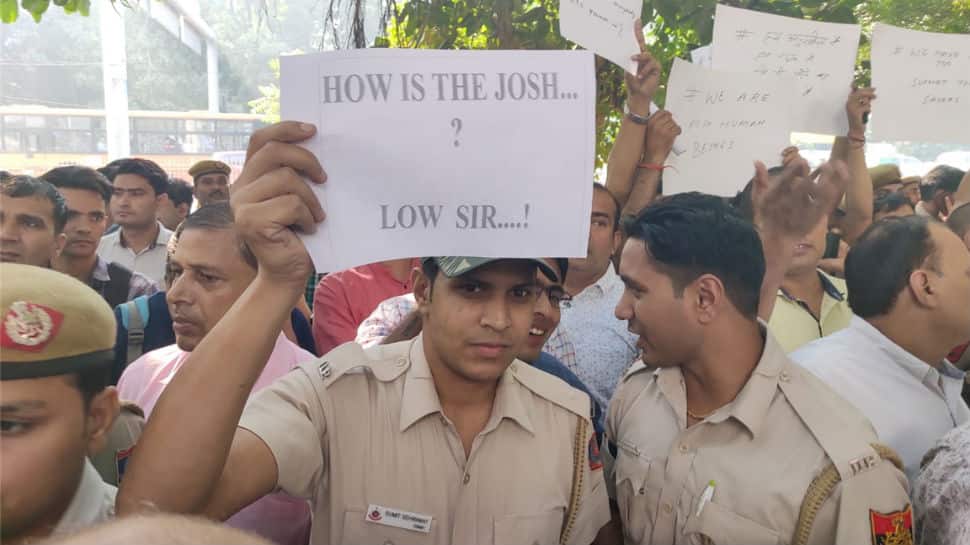 New Delhi: In a strongly-worded tweet, Union Minister of State for Youth Affairs and Sports Kiren Rijiju condemned the thrashing of Delhi policeman by lawyers outside Saket Court on Monday. He posted a video of the incident, going viral on social media, and said that "one should not take law in one's hand."

The viral video showed an on-duty policeman being thrashed by lawyers. One of the lawyers was also seen slapping the policeman, who was on a bike and as he prepared to leave the spot, his bike was hit with a helmet.

"Let's not take law into our hands," Rijuju wrote.

Let's not take law into our hands. https://t.co/l52elZ2cmm

Earlier on Monday, another Delhi Police constable was beaten up by lawyers at the Karkardooma Court and they also misbehaved with a woman journalist.

The course of events are a result of a minor argument between a lawyer and some policemen over parking at the Tis Hazari Court complex on Saturday. The minor argument snowballed into a major controversy and flared into violence and arson. A lawyer sustained bullet injury during the scuffle and at least 20 other police personnel and eight lawyers were also injured.

Following the incident, the Delhi High Court directed a judicial inquiry into the incident. On Monday, the functioning of the judiciary remained stalled as lawyers gave a strike call to protest againt the assault.

On Tuesday, a group of Delhi Police personnel and their families sat on a protest outside police headquarters to protest against the assault. Hundreds of police personnel, seen in uniform and wearing a black band to condemn the attacks on their rank by a group of lawyers, gathered at the Police Headquarters (PHQ) to hold a 'silent' protest.