Hundreds of Delhi Police personnel on Tuesday gheraoed the Police Headquarters (PHQ) at ITO here to protest against repeated incidents of violence against them by lawyers. Demanding to meet the Delhi Police Commissioner and that action be taken against the lawyers who raised hands on policemen on duty during a clash at Tis Hazari court on November 2.

New Delhi: Hundreds of Delhi Police personnel on Tuesday gheraoed the Police Headquarters (PHQ) at ITO here to protest against repeated incidents of violence against them by lawyers. Demanding to meet the Delhi Police Commissioner and that action be taken against the lawyers who raised hands-on policemen on duty during a clash at Tis Hazari court on November 2.

The protesting policemen are seen wearing black bands on their sleeves as a sign of protest as they carry banners which read, 'Save Police' and 'We Are Humans Too' among other messages.

Delhi Police has submitted a review petition in the Delhi High Court which will hear the matter tomorrow at 3 pm. The petition has been filed in the court as the Delhi police cannot fulfil the demands of agitating cops on its own. Delhi Districts Courts Coordination Committee has decided that abstinence from work in all Delhi District Courts, will continue tomorrow, November 6. Litigants will be permitted to have access to the court rooms, it informed.

Satish Golcha, Special Commissioner, Crime, gave the message of Police Commissioner which assured the agitating Delhi Police personnel that most of their demands would be accepted, compensation of Rs 25,000 would be given to the injured policemen. They were asked to end their 'Dharna'.

Special Commissioner Law & Order R S Krishnaiya said, '' Investigation is going on, it takes time to act through the law. The family members who are protesting here should go back to home. We have solutions to all your demands. He also assured the agitating cops that no action will be taken against them, ''they should get back to their duties.''

Uttar Pradesh IPS Association condemns attack on Delhi Police Officers, says, "Humiliation and assault during discharge of official duty cannot be tolerated. We stand in support and solidarity with our brethren and demand justice for them."

"We strongly condemn incidents of violence against Officers & Men of Delhi Police and stand in solidarity with the Injured & their families. We appeal to the Authorities to swiftly bring the guilty to book by a fearless & impartial investigation & ensure Justice & Equity prevail," tweets official Twitter handle of IPS (Karnataka) Association.

Kerala Police Association condemns attack on policemen, comes out in support of protesting Delhi police personnel. "Barbaric behaviour on cops has no place in the democracy."

Lawyers and police should work in complete harmony. Both of them are pillars of criminal justice system. Best treatment will also be given to both lawyers and policemen who received injuries during the clash at Tis Hazari court complex on November 2. An ex-gratia will also be provided to them.

Delhi L-G anil Baijal assures protesting policemen that ex-gratia will be given to cops who received injuries during police-lawyers clash at Tis Hazari court complex on November 2.

Joint Commissioner of Police (Southern Range), Devesh Srivastava assures protesting policemen that no departmental action will be taken against those who are demonstrating against November 2 assault.

Delhi: Family members of Delhi Police personnel protesting against the clash that broke out between police & lawyers at Tis Hazari Court on 2nd November, lit candles at India Gate, today.

Delhi Deputy Chief Minister Manish Sisodia says: Entire episode is unfortunate. On one side, there are Police personnel who provide security to the common man and on other side are the lawyers that ensure justice to them. Conflict between them, should have been avoided or handled well.

We will aceept all demands of protesting police personnel, assures Joint Police Commissioner; adds, FIR will be registered in all cases where cops were attacked by lawyers.

A judicial enquiry is being conducted everyone should wait for the outcome of the inquiry. We are keeping a close watch on situation: MHA Sources

"The Assn stands in support with each personnel of Delhi Police who was beaten up. We ask for an investigation into the incident. Police and lawyers both know the law, and no one should have taken the law into their hands."

Delhi High Court adjourns application by MHA on court's order of 'no coercive action against lawyers to events subsequent to Tis Hazari clashes' for Wednesday. Court also issues notices to Delhi Govt and all other bar associations in the capital in the main matter.

Joint Commissioner of Police, Delhi, Rajesh Khurana addresses police personnel protesting at Police Head Quarters in ITO: We are the one who enforce the law and we have to continue with our work.

Rajesh Khurana, Joint Commissioner of Police, Delhi addresses the police personnel protesting at the Police Head Quarters (PHQ) in ITO: We are the one who enforce the law and we have to continue with our work. #DelhiPolice pic.twitter.com/Jkd61QkFi5

Lawyers also planning to protest at India Gate after families of protesting police personnel make their way to the iconic memorial to held demonstration against the Tis Hazari court incident.

The MHA has moved clarification on the aspect the order pertains to only the FIRs that have been registered for the day of the incident and is not applicable to any subsequent event.

Union Home Ministry files an application seeking clarification on Delhi High Court order which directed for no coercive step against lawyers against whom FIR has been registered, following the clash between police and lawyers at Tis Hazari Court on November 2.

Copy of FIR registered at Saket police station against the assault on police officer by a group of lawyers on November 4. 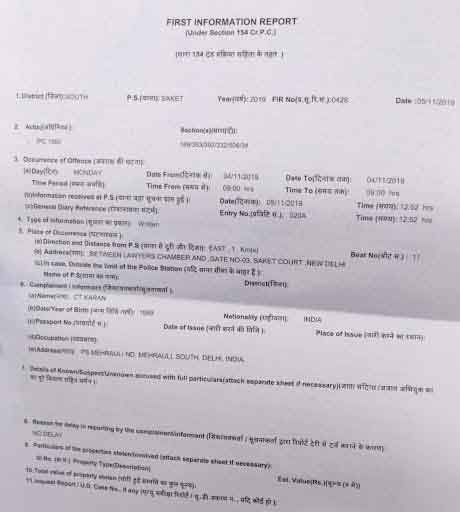 Family members of policemen block road in Narela over the recent manhandling of Delhi cops by lawyers. 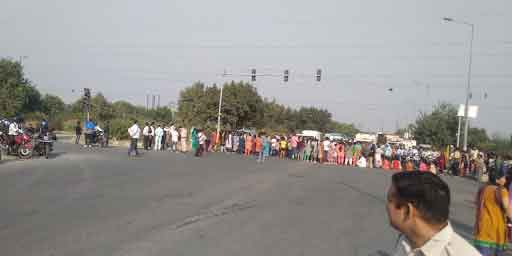 Action against lawyers found guilty of violence will be taken against in 48 hours: Bar Council of India

Delhi: Two FIRs have been registered, in connection with a violence outside Saket District Court on 4th Nov. One FIR filed on the complaint given by the police officer who was thrashed by a lawyer & another on the complaint of a taxi driver who was hit with a steel rod. 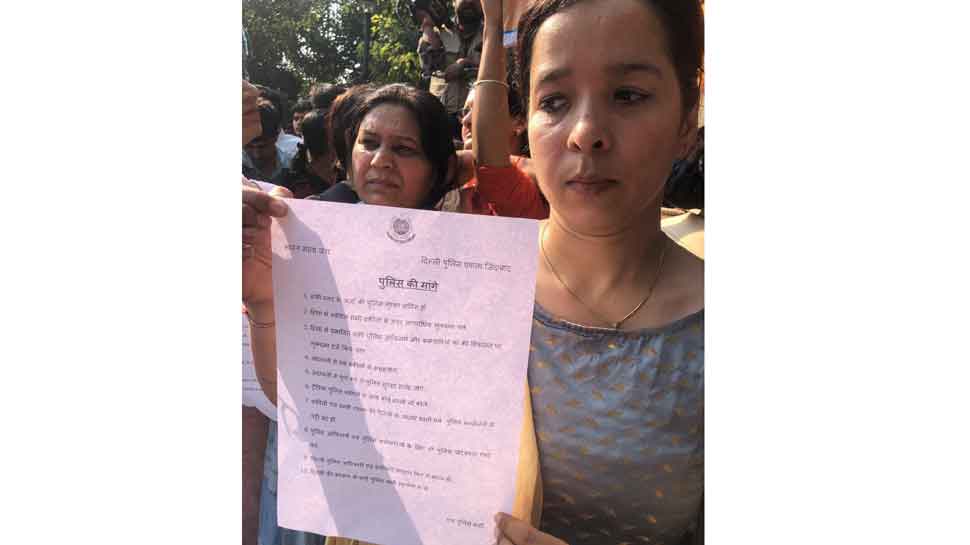 Family members of police personnel to protest at India Gate at 4 PM.

AAP MLA from Greater Kailash, Saurabh Bharadwaj wrote on Twitter, "Delhi Police has been converted into Political Entity and works like an Armed Wing of BJP."

BJP has emboldened Delhi Police so much that we are living in a Police State.

The Police is least concerned about basic law & order issues in Delhi. Police officers are so arrogant.

Delhi Police has been converted into Political Entity and works like a Armed Wing of BJP. pic.twitter.com/jArD95vF7E

Delhi Police personnel hold placard with a picture of former Delhi Special CP, Kiran Bedi that reads "We need you", outside the Police Head Quarters (PHQ) in ITO. They are protesting against the clash that broke out between police & lawyers at Tis Hazari Court on 2nd November.

AAP MLA Saurabh Bharadwaj accuses BJP of emboldening Delhi police, tweets: BJP has emboldened Delhi Police so much that we are living in a Police State. The Police is least concerned about basic law & order issues in Delhi. Police officers are so arrogant. Delhi Police has been converted into Political Entity and works like a Armed Wing of BJP.

PDP chief Mehbooba Mufti, who is currently under detention in Jammu and Kashmir, takes to Twitter to draw a sharp contract between the Delhi Police personnel protest with the current situation in Kashmir. "Delhi cops can take to the streets to oppose attack on a colleague & Maharashtrians can peacefully protest the felling of Aarav trees.But Kashmiris are stripped of the very same rights. Why?," she writes.

Delhi cops can take to the streets to oppose attack on a colleague & Maharashtrians can peacefully protest the felling of Aarav trees.But Kashmiris are stripped of the very same rights. Why?

Lawyers at all Delhi District Courts on strike today, following clashes between police and the lawyers at the Tis Hazari Court on 2nd November. No protests by lawyers at any district court has been reported till now today.

Protesting Delhi police personnel refuses to pay heed to Delhi Commissioner's appeal to resume duties. The cops continue to protest outside the Delhi Head Quarters against the manhandling of a cop on duty by a group of lawyers.

BCI asks Coordination Committee of District Court Bar Associations to control the situation in all District Bar Complexes and create a congenial atmosphere.

BCI writes to all District Bar Associations of Delhi asking them to convene an emergent meeting of Coordination Committee at 2 PM on November 5.

Former DGP, J&K expresses dismay and continued attack on policemen, who spend their lives protecting others.

The Indian Police Service (IPS) tweets in support of its Delhi colleagues, saying police officers across the country supported their action.

Incident involving police & lawyers unfortunate. All should take a balanced view of it based on facts in public domain. Countrywide, police stands in solidarity with those police personnel subjected to physical assault & humiliation. Condemn all attempts to break law, by anyone!

Bar Council of India calls for names and details of advocates involved in acts of violence in and outside the District Court complexes on November 5.

BCI writes to all District Bar Associations of Delhi asking the lawyers to end the strike and return to work immediately, adding that any lawyers found involved in any kind of violence will not find any support from the legal body.

Bar Council of India condemns lawyers' attack on police officer outside Saket court, says 'hooliganism has no place in the bar'.

Congress leader Randeep Surjewala hits out at government on the protest by Delhi police personnel. "A new low in 72 years - Police on protest in National Capital of Delhi’. Is this BJP’s New India’?" tweets Surjewala

We have crossed several hurdles. Judicial inquiry will be looking into the matter. And the incident must be tackled in right manner: Delhi Police Commissioner

The incident that took place at Saket court yesterday was a stray incident. We shouldn't generalise them: Delhi CP Amulya Patnaik

Delhi Police Commissioner Amulya Patnaik: Delhi police is a disciplined force and we need to ensure law and order. There is a lot of expectation from us.

"I am confident we will resolve the issue," Delhi Police Commissioner Amulya Patnaik tells protesting cops.

Delhi Police Commissioner Amulya Patnaik appeals for peace from protesting police personnel, asks them to end protest and return to duty. "This is an important test for our force. We should behav elike enforcers and protectors of law."

Cabinet Minister Kiren Rijiju extends support to the protesting policemen, saying that being a cop is a 'thankless job' that often goes underappreciated.

"Being a cop is a thankless job. But they don’t do it for thanks. Police officers put their lives on the line every day. They are damned if they do, and damned even if they don’t. What gets lost in all the anti-police rhetoric is the family left at home while a policeman serves," he said.

In a separate tweet, Rijiju urged everyone to not take law into their hands but "let law take it's own course!"

Hundreds of Delhi Police personnel and their family members today gheraoed the Police Headquarters to protest against repeated incidents of violence against them by lawyers.