CM Banerjee said, "From today I'm going to sit near the Metro Channel. Tomorrow proceedings in state assembly will take place where I will hold a meeting. This dharna means satyagraha." 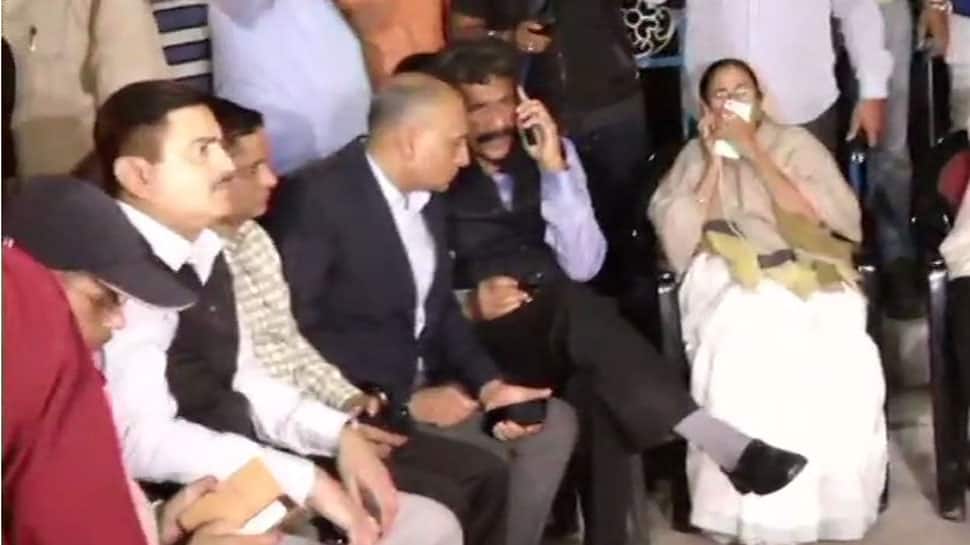 Hours after a team of CBI officers were stopped from entering the residence of Kolkata Police Commissioner Rajeev Kumar on Sunday, West Bengal CM Mamata Banerjee launched a 'dharna' saying that she has taken the step to save the federal structure and called it a 'coup' by PM Narendra Modi and BJP chief Amit Shah on the state.

Addressing a press conference, CM Banerjee said, "From today I'm going to sit near the Metro Channel. Tomorrow proceedings in state assembly will take place where I will hold a meeting. This dharna means satyagraha."

A team of CBI officers was stopped from entering the residence of Kolkata Police Commissioner Rajeev Kumar in Kolkata on Sunday when they had gone to question him in connection with chit fund scam cases.

Throwing her weight behind the city police chief, West Bengal Chief Minister Mamata Banerjee rushed to the Loudon Street residence of Kumar in central Kolkata and held a meeting.

Thank you for being with us.

I spoke with Mamata Di tonight and told her we stand shoulder to shoulder with her. The happenings in Bengal are a part of the unrelenting attack on India’s institutions by Mr Modi & the BJP. The entire opposition will stand together & defeat these fascist forces, tweets Rahul Gandhi

The CBI will approach the Supreme Court on the matter as the West Bengal Police are not cooperating: CBI Interim Director M Nageshwar Rao

West Bengal Secy Home Affairs A Bhattacharya writes to state EC, "He has clarified that he (Kolkata Police Commissioner) was absent from meeting on 31 Jan as he had applied for casual leave for personal reasons, he intended no offence or disrespect to Election Commission of India."

A Bhattacharya, Secy Home Affairs, W Bengal writes to state EC: He has clarified that he (Kolkata Police Commissioner) was absent from meeting on 31 Jan as he had applied for casual leave for personal reasons, he intended no offence or disrespect to Election Commission of India. pic.twitter.com/Sej4MbgxwY

Condemning the incident, BJP leader GVL Narasimha Rao said, "Incident taking place in Kolkata is unfortunate. Mamata Banerjee wants to protect the corrupt in her state, like a dictator. She is obstructing the investigation of CBI which was there as per SC order. She is shredding apart the constitution. We condemn this. CBI is working as per directions of SC, no state govt has the power to obstruct or detain them. It's unconstitutional&undemocratic...We hope SC gives a direction to WB govt, keeping this incident in view otherwise no agency will be able to work in this country."

According to the CBI, IPS officer Kumar, who led a Special Investigation Team of West Bengal Police probing the scams, needs to be questioned regarding missing documents and files but he has not responded to notices to appear before the agency. Kumar, a 1989-batch IPS officer of West Bengal cadre, did not even attend a meeting with Election Commission officials who had gone to Kolkata to review election preparedness, sources said.

A statement was issued Sunday from Kolkata Police, dismissing reports of him being missing from work. "Please take note that not only is the CP Kolkata available in the city, but has also been attending office on a regular basis, with the exception of January 31, 2019, when he was on leave for a day. All concerned may please take note that if any news is spread without proper verification, Kolkata Police will initiate strict legal action against defamation of both the CP Kolkata and Kolkata Police," the police said.

All five CBI officers that were detained by police at Shakespeare Sarani police station in Kolkata have been released.

West Bengal CM Mamata Banerjee launched a 'dharna' saying that she has taken the step to save the federal structure and called it a 'coup' by PM Narendra Modi and BJP chief Ami Shah on the state. Addressing a press conference, CM Banerjee said, "From today I'm going to sit near the Metro Channel. Tomorrow proceedings in state assembly will take place where I will hold a meeting. This dharna means satyagraha."

Interim CBI chief M Nageshwar Rao said, "We are contacting our senior law officers about the Kolkata incident. Whatever they suggest will be followed." Backing the CBI officers move, Nageshwar Rao said that there is evidence against Rajeev Kumar and he has been instrumental in causing the destruction of this evidence and obstructing justice. "We are investigating these chit fund cases as per the directions of the SC. A SIT has been constituted by the West Bengal government prior to SC's direction under the chairmanship of Rajeev Kumar, who is currently the Kolkata police commissioner," Rao added.

In a tit-for-tat move, a team of Kolkata Police officials reached the CGO Complex- the state headquarters of CBI.

Reacting to the fast-paced developments, CBI joint director Pankaj Srivastava said, "We had gone there to investigate him (Kumar). And if he hadn't cooperated with us we would have rounded him up." Asked about police officials cordoning off the CBI offices and his residence, he said, "I have also been detained and there are police officers standing outside my house."

Joint Commissioner of Police (Crime) Pravin Tripathi said the CBI officers have been let go from the police station after questioning. "They just said they had come for a secret operation. We don't know what kind of operation it is," Tripathi said.

West Bengal Chief Minister alleged that National Security Advisor Ajit Doval was giving instructions to the CBI at the behest of Prime Minister Narendra Modi and BJP President Amit Shah as she began a sit-in at the city centre "in a bid to save the federal structure of the country". "I am sorry to say National Security Advisor Ajit Doval is giving instructions to the agency. He is implementing what PM Narendra Modi is asking. He should tell the people that it is not correct," an agitated Banerjee said.

As the CBI team landed at the city police chief's residence, a team of Kolkata Police officers rushed to the spot to speak to the CBI officials and tried to enquire whether they had required documents to question Kumar. "We don't want to speak on this issue as of now. Let's see what happens. Please wait for sometime," a senior CBI official standing outside the Police commissioner's house told reporters.

The fast-paced development started unfolding as soon as a team of 40-odd agency officers arrived at Kumar's residence this evening, but they were stopped by sentries and officials. A day earlier, the Central Bureau of Investigation (CBI) claimed that Kumar had been "absconding" and "being looked for" in connection with Saradha and Rose Valley ponzi scam cases.

West Bengal Chief Minister Mamata Banerjee rushed to the residence of Kumar. She had earlier extended her support to Kumar and alleged that the BJP was "misusing power to take control of the police and all other institutions". Party spokesperson Derek O' Brien tweeted, "BJP planning a constitutional coup ? 40 CBI officials surround Kolkata Police Commissioner's home. Destruction of institutions goes on unabated. Our demand in #Parliament on Mon. Modi has to go. We are reaching out and sharing this with all Oppn parties who want to #SaveDemocracy."

Amidst escalating tension between West Bengal Chief Minister Mamata Banerjee and the Centre, Loudon Street in central Kolkata witnessed a virtual showdown between the state police and the CBI. Even though there were initially conflicting reports about some CBI officers being arrested, the city police later clarified that no CBI officer was arrested by them.

In an unprecedented development, a number of CBI officers, who had gone to question Kolkata Police chief Rajeev Kumar in connection with chit fund scam cases, were bundled into police jeeps, whisked to a police station and briefly detained on Sunday