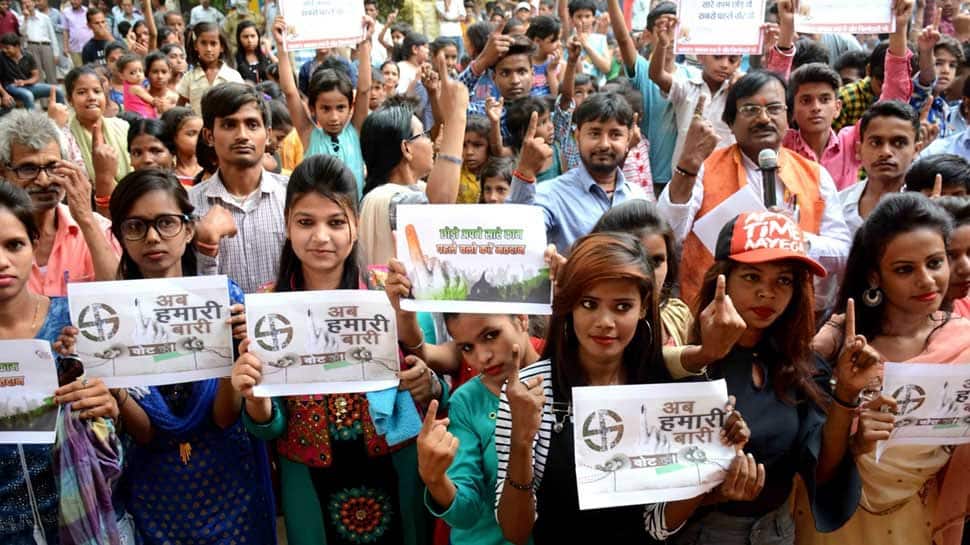 Service voters stood at 18 lakh. These include personnel of the armed forces, central police force personnel and state police personnel who are posted outside their constituencies. Diplomats and support staff posted in Indian embassies abroad are also counted as service voters. Out of 18 lakh registered voters, 16.49 lakh have sent their postal ballots to their respective returning officers as on May 17.

Out of the 543 Lok Sabha seats, elections were held in 542 constituencies as the EC had cancelled polls to the Vellore constituency on the grounds of excessive use of money power. The poll panel is yet to announce a fresh date for elections in Vellore.

Here are the live updates of Lok Sabha election results 2019-

Congress has readied a Karnataka-style plan in case Lok Sabha election results 2019 are different from the exit polls. The party have decided to name it as Secular Democratic Front. Congress legal team has prepared three sets of letters in case the party feels it can give a fight to the Bharatiya Janata Party-led National Democratic Alliance in forming the next government. The plan includes bring together parties which are not part of the United Progressive Alliance (UPA) currently like Trinamool Congress (TMC), Telugu Desam Party (TDP), Samajwadi Party (SP), Bahujan Samaj Party (BSP) and the Left Front led by the Communist Party of India Marxist.

BJP Bhopal candidate Sadhvi Pragya Singh Thakur will break her vow of silence today. She had on May 20 apologised for her comments calling Nathuram Godse, who had assassinated Mahatma Gandhi, a patriot and said she would observe "silence" for 63 hours as a mark of penance.

Lok Sabha election results 2019 on Thursday will give India a new government. Following the mammoth Lok Sabha election 2019, the process of which was kicked off by the Election Commission of India on March 11, the counting the votes of over 67.11 crore voters across the country will take place today (March 23).

Lok Sabha election 2019 kicked off on March 11 when the Election Commission of India announced the schedule. Voting was held in seven phases on April 11, 18, 23, 29, May 6, 12 and 19. The results of the mega electoral exercise will be declared on after the counting of votes on May 23. Over 67.11 crore voters exercised their right to vote.

At 8 am, the Election Commission of India will start counting the postal ballots followed by the electronic voting machines (EVMs) and then the voter-verified paper audit trail (VVPAT). The trends of Lok Sabha election 2019 will starting flowing in thick and fast in a few minutes. The final declaration of Lok Sabha election 2019 results is likely to take place only by late evening on May 23 (Thursday) or even on May 24.

At the BJP office in Delhi, a separate media stand has been created from where the party leaders will express their views as the trends/results start pouring in. Several BJP leaders will be present in the party headquarters from 8 am onwards on May 23.

The sprawling central office of BJP in New Delhi is all decked up for the D-day, that is, May 23, when the counting of votes for 2019 Lok Sabha election will be taken up. Most of the exit polls have predicted that the Narendra Modi-powered BJP-led NDA will storm back to power with a massive mandate.

The states and UTs have been further asked to take adequate measures for the security of Election Commission strong rooms and venues of counting of votes.

The Ministry of Home Affairs (MHA) has sounded an alert to all state chief secretaries and the DGPs regarding possible violent clashes that might erupt in different parts of the country on May 23, the day counting of votes polled in all seven phases of Lok Sabha elections will take place.

After voting in seven phases which concluded last Sunday (May 19), a majority of exit polls released predicted a comfortable win for the National Democratic Alliance (NDA) with the Bharatiya Janata Party (BJP) possibly hitting the majority mark on its own. Zee News’ poll of polls - Maha Poll – showed that the NDA could once again hit a triple century and form the government on the back of wins in 303 seats. It has also predicted that the Congress-led United Progressive Alliance may be halted to 117 seats, quite unable to mount any challenge. The other parties are predicted to finish with a combined tally of 122 seats.

It promises to be a thriller of a Thursday in India when Election Commission sits down to count crores of votes cast in Lok Sabha election 2019 - the largest democratic exercise in the world – spanning the length and breadth of the country over more than 40 days. Seven phases, 542 constituencies, thousands of candidates and crores of eligible voters have defined Lok Sabha election 2019 over the last several weeks. Promises have been lofty, allegations have been scathing and not a single stone has been left unturned by political parties in their respective bids to either remain in power or seize it. Lok Sabha election 2019 has been a potboiler with ample doses of action, drama and even comic relief which now promises to end in an electrifying climax.