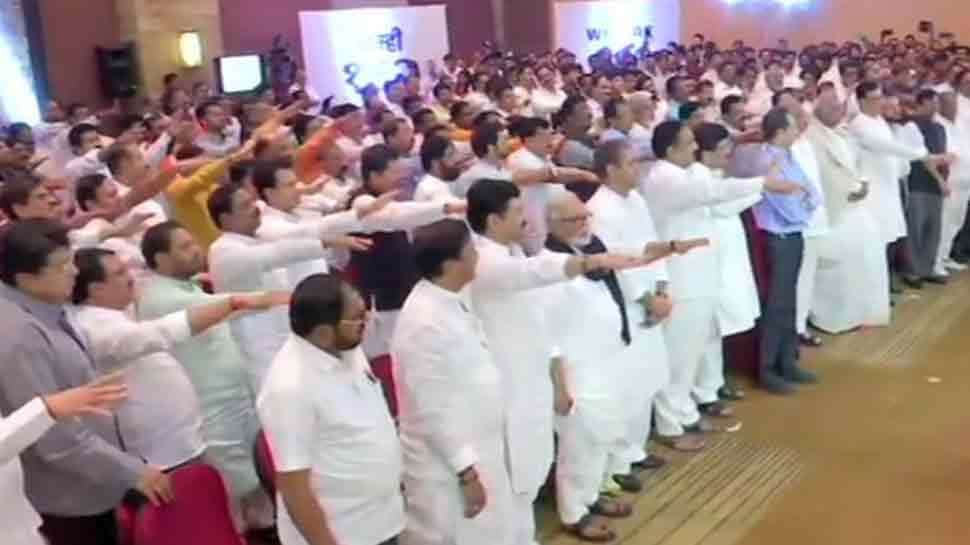 Mumbai: Maharashtra's political drama took a new twist on Monday (November 25) evening as Shiv Sena-Nationalist Congress Party-Congress combine put up a massive show of strength at a Mumbai hotel with their 162 MLAs. The newly-elected MLAs of the three parties pledged jointly in the presence of their senior party leaders that they would not get "lured" and "will not do anything that would benefit the Bharatiya Janata Party (BJP).

In a media spectacle at Mumbai's Grand Hyatt hotel, the MLAs took the oath in the presence of Shiv Sena chief Uddhav Thackeray, NCP supremo Sharad Pawar and senior Congress leader Mallikarjun Kharge. Several other senior leaders of the three parties, too, were present during the power projection aimed at puncturing the BJP's claim of enjoying majority in Maharashtra Assembly.

Sharad Pawar slammed rebel NCP leader Ajit Pawar and warned the BJP against grabbing power like it did in Goa and Karnataka, while Uddhav Thackeray said the fight was not for power but for ‘Satyameva Jayate’.

Addressing the MLAs, the NCP supremo said it was the responsibility of the Shiv Sena-NCP-Congress to form a government as no party got majority in the assembly election. Pawar also accused the BJP of misusing the Parliamentary procedures and trying to grab power in Maharashtra despite not having majority.

He said, “We are here together for people of Maharashtra. A government was formed in the state without majority. BJP didn't have majority in Karnataka, Goa, and Manipur but still formed government. There will not be any problem in proving our majority. The one who is suspended from the party cannot give any orders. On the day of floor test, I will bring more than 162 MLAs. This is not Goa, this is Maharashtra.”

Uddhav Thackeray, however, said that he has more people to thank now as he has made “new friends,” adding “if these visuals don’t open their eyes, the united Opposition has the capacity to make them realise the strength of the people’s mandate.” He further said, “Our fight is not just for power, our fight is for 'Satyamev Jayate.' The more you try to break us, the more we will unite.”

Meanwhile, Congress leader Ashok Chavan said that their strength is more than 162 and thanked party interim president Sonia Gandhi. He added, “We are more than 162, not just 162. We all will be a part of the government. I thank Sonia Gandhi who allowed for this alliance to stop BJP. The governor should invite us to form government.”

NCP leader Nawab Malik also warned the BJP against creating a rift in the NCP, and said “BJP still has a chance to save its honour. If they try to break the party, we will give a befitting reply. Ajit Pawar is a part of our party, he is part of the Pawar family. We are trying that he comes back to NCP and admits his mistake.”

Criticising the Shiv Sena-NCP-Congress show of strength, BJP leader Ashish Shelar said the MLAs were paraded like criminals, adding “Identification parade is done in case of accused persons, not in case of elected MLAs. It is an insult to the MLAs and the people who elected them.”

Earlier on Monday, the Supreme Court reserved the order on a joint petition filed by Shiv Sena, Congress and NCP against the decision of Governor Bhagat Singh Koshyari to invite the BJP to form government in the state. The petitions were filed after BJP`s Devendra Fadnavis took oath for the second consecutive term as the state Chief Minister, with NCP`s Ajit Pawar as his Deputy Chief Minister on Saturday morning.

The order on whether the floor test will be conducted for proving the majority of the BJP-led Fadnavis government is expected to be pronounced at 10:30 am on Tuesday. A bench of Justices NV Ramana, Ashok Bhushan, and Sanjiv Khanna heard the arguments put forth by counsels appearing for Governor, Maharashtra BJP and other parties.

Meanwhile, the Congress-NCP-Shiv Sena also submitted a letter in the Raj Bhawan on Monday to stake claim to form the government.