The CM has also directed the state authorities to closely monitor the situation from Midnapore. 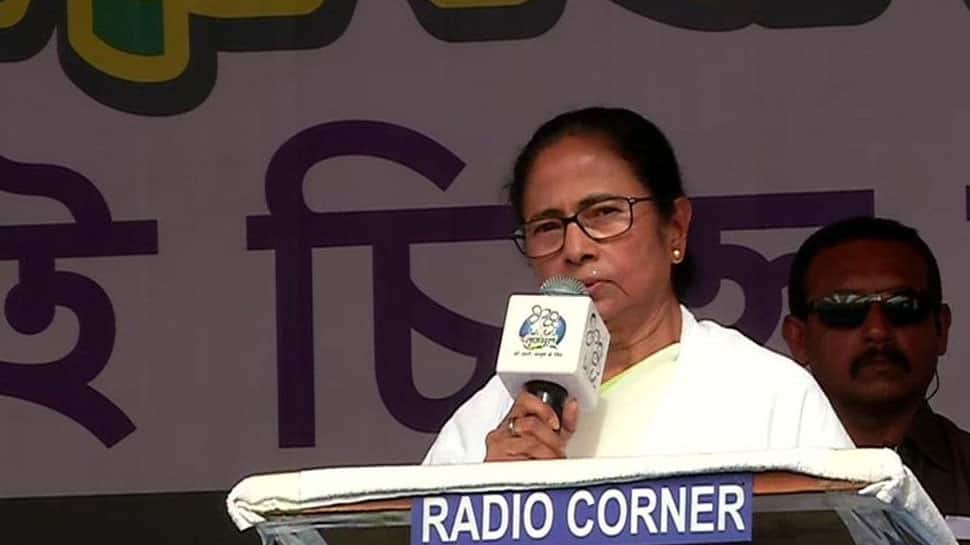 Kolkata: West Bengal CM Mamata Banerjee has cancelled all public rallies for the next 48 hours in the wake of severe Cyclonic storm Fani, which hit the coast of Odisha on Friday morning.

The Chief Minister has also directed the state authorities to closely monitor the situation from Midnapore, which is a coastal district of West Bengal.

''Have cancelled my rallies for the next 48 hours because of what could be an impending disaster #CyclonicStormFANI We are monitoring the situation 24x7 and doing all it takes. I appeal to all people to cooperate. Be alert, take care and stay safe for the next two days,'' the Trinamool Congress chief said in a tweet on Friday.

Have cancelled my rallies for the next 48 hours because of what could be an impending disaster #CyclonicStormFANI We are monitoring the situation 24x7 and doing all it takes. I appeal to all people to cooperate. Be alert, take care and stay safe for the next two days

Meanwhile, the West Bengal government has sounded an alert in coastal East Midnapore and South 24 Parganas districts, asking tourists to leave seaside destinations and directing fishermen not to venture into the sea, as Cyclone Fani moved closer to the state.

Schools have been asked to stay closed and locals to move to safer places as the state braces for the extremely severe cyclonic storm which is expected to make its landfall in neighbouring Odisha Friday.

The government has started making announcements in seaside destinations of Digha, Shankarpur, Tajpur and Mandarmani in East Midnapore and Bakkhali in South 24 Parganas, asking tourists to leave immediately and locals to take shelter in secure areas, he said.

"Each and every district has been alerted to keep a close watch on the situation. A control room has been opened 24X7 in this connection," Chief Minister Mamata Banerjee said.

Banerjee said she will be staying at Kharagpur in West Midnapore district for the next two days to supervise the situation.

At the state secretariat, the official said that a committee has been formed under Chief Secretary Malay Kumar De to keep a close watch on the impact of Cyclone Fani 24X7.

De held an emergency meeting with senior officials of the disaster management department, security officials in the coastal areas of the state, representatives of the Army, Navy and state police.

Disaster response force personnel have been deployed. Fishermen have been asked not to venture into the sea and plying of boats and ferry services have been suspended on May 3 and May 4 in all the districts where precautions are being taken, he said.

"Around 10,000 tarpaulin sheets have been distributed among the inhabitants and announcements has been started in all the villages of the districts likely to be affected for the awareness of the people," the state Disaster Management Minister Javed Khan told PTI.

People have been advised to keep the necessary medicine and drinking water ready. They have also been asked to keep necessary documents in waterproof cases and stay in the temporary shelters arranged by the government, the official said.

"We have readied all form of relief materials, water pouches, medicines. Adequate allotment of relief materials has been made to all districts. Six National Disaster Response Force teams have been deployed at Digha in East Midnapore, Kakdwip and Dhamakhali in South 24 Parganas, Basirhat in North 24 Parganas, Kharagpur in West Midnapore and Sankrail in Howrah," the official said.

An emergency helpline number 1070 has also been set up to help people, he said adding there will be special night patrolling at vulnerable locations till the end of the cyclone.

Four State Disaster Response Force teams have been moved to Basanti in South 24 Parganas district, Contai and Haldia in East Midnapore and Arambagh in Hooghly district, he said adding the PWD, fisheries, irrigation, power and PHE departments have opened control rooms to provide emergency support in there.

"One standby team of the SDRF will be ready at the state secretariat to move to any place," he said.

Special teams of the disaster management team apart from NDRF personnel have been readied in all these districts to take immediate action if required, the official added.

South Eastern Railway has cancelled six pair of trains to and from Puri to the city and provided three special trains to bring back stranded passengers from the pilgrim town, an official said.

Buses are being arranged in coordination with West Bengal government at terminals for the convenience of those passengers returning from Puri, he said.

Meanwhile, the Kolkata Municipal Corporation has directed all its engineers to remain on high alert. City Mayor Firhad Hakim said pumping stations have been asked to drain out water and leaves of the KMC employees have been cancelled. "We have asked people staying in dilapidated buildings to move out," Hakim said.

All ships in the Kolkata Dock System and Haldia Dock Complex have been specifically advised to take precautionary measures, he said.

"Two control stations have been opened with required facilities, one at Kolkata and other at Haldia and will be maintained around the clock," KoPT officials said, adding they would be coordinating with DG shipping, Coast Guard and state disaster centre.

Inland Waterways Authority of India has been advised to secure Bangladeshi vessels in safe areas.

Director General of Civil Aviation said no flight will depart or arrive at the Kolkata airport between 9.30 PM of May 3 and 6 PM of May 4.

Kaushik Bhattacharya, the director of Netaji Subhas Chandra Bose International Airport, said leaves of all the AAI employees have been cancelled from Friday.