Maqbool Sherwani: Lion of Baramulla who saved Kashmir from Pakistan

Maqbool Sherwani sacrificed himself to save the lives of Kashmiris and to resist invasion on Indian soil. 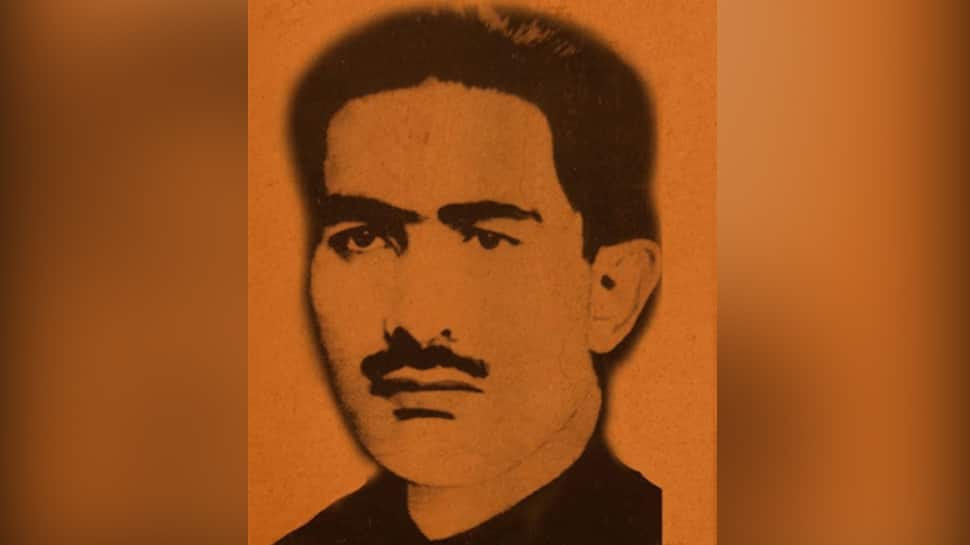 As Jammu and Kashmir and the entire nation mark the ‘Black Day’ of tribal invasion in Jammu and Kashmir in 1947 by a lashkars of 20,000 kabailis (Pakistani tribesmen), tributes from all across the nation are pouring in for the less known martyr--Maqbool Sherwani. He sacrificed himself to save the lives of Kashmiris and to resist invasion on Indian soil.

After entering Jammu and Kashmir loaded like cattle in lorries and trucks, tall and shabby tribesmen entirely plundered the beautiful city of Baramulla on  October 26. The attack was so lethal that only 3,000 citizens of Baramulla out of a total population of 14,000 were said to have survived--a fact that Akbar Khan, a Pakistani commander and main perpetrator of the attack, has himself agreed to in his book ‘Raiders in Kashmir’.

While saving his multicultural city, Maqbool Sherwani rode on his motorcycle and found the raiders plundering the city. He held public meetings in villages on his motorcycle to unify them and collectively take on the raiders. Seeing a local citizen on the deserted road, the raiders asked him for the route to Srinagar airport. 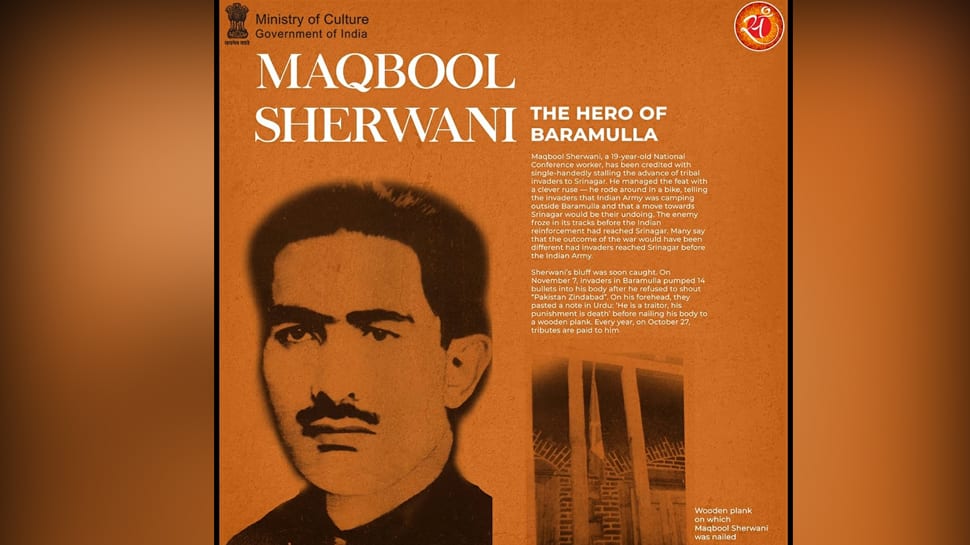 The idea of Pakistan was to capture Srinagar Airport as it was the only means for urgent procurements and deployment of the Indian army in case of immediate warfare. Controlling the Srinagar airport meant cutting off the valley from the rest of India.

However, Sherwani displayed his presence of mind and in a convincing tone, misguided the raiders and suggested to them a wrong path that was going to lead them to nowhere. He also led them for some distance astray. However, after wandering on the wrong path for some time and realizing about being misguided, the raiders returned back to find Sherwani and punish him for the delay. Sherwani was in Sumbal, 35 km away from Baramulla when raiders found him, abducted and brought him back to Baramulla to set an example for the Indian patriots.

Angry raiders found him and shot 14 bullets on him. Reflecting the intensity of their hatred for Sherwani, raiders mutilated his body and then crucified it before firing bullets on him. His body, nailed to a wooden plank, was tied to two pillars of Khan Hotel, near Regina Cinema and kept hanging for several days as no one dared to come out. The raiders also pasted a note on his head that read--‘He is a traitor, his punishment is death’.

Sherwani died a martyr’s death, which did not go in vain. Kashmiris rose up against the raiders with a greater intensity all over the valley as soon as the news of his martyrdom spread like a wildfire. Most importantly, the misguiding of raiders helped in providing a buffer and buying time for the Indian soldiers to reach Srinagar and save the airport and the city.

Every moment was crucial. The consent on accession was yet to come from Maharaja Hari Singh, without which the Indian army would have been unable to be deployed. Eventually, Maharaja signed the agreement of accession on 26 October and New Delhi sent the Indian Army to Kashmir the very next day.

In the morning of 27 October 1947, soldiers of the Sikh Regiment landed at Srinagar airport after being airlifted from Gurgaon base. Dewan Ranjit Rai, who was martyred in the war with raiders, was commanding the unit. When the Indian army reached Srinagar, it was received warmly by the Kashmiris.

A famous Kashmiri journalist Sofi Ghulam Mohammad shared the anecdote and recalled “when they entered the city, there were cheers. They were garlanded.” He also recalled the slogans raised by Kashmiris like “You invaders beware, we Kashmiris are ready to fight you’ and ‘Long live Hindu-Sikh-Muslim unity’

The importance of Maqbool! Sherwani’s presence of mind and action in the nick of time can be understood from the fact that when Indian army reached Srinagar, the raiders had already reached the outskirts of Srinagar — just a few milestones away. Just a difference of a few hours could have cost the entire Srinagar!

For the next ten days, there were intense battles between the Indian Army, raiders and Pakistani soldiers commanding the raiders. Eventually, the fort fell on November 7, lashkars collapsed and the remaining raiders began to retrieve toward Pakistan.

Sherwani was an adherent opponent of the Muslim League and the idea of Pakistan. Locals still share the incident of how he, along with his supporters, disrupted a public rally of Mohammad Ali Jinnah in Baramulla on 25 July 1944. Sherwani celebrated the pluralistic culture of Baramulla. Locals also share stories highlighting his efforts to promote harmony and religious tolerance. According to a few anecdotes, it is believed that Sherwani kept shouting “Victory for the unity of Sikh, Hindus, and Muslims” when he was being executed.

Thoughts of Sherwani are one of the major forces behind promoting peace and national integrity in Jammu and Kashmir. Pakistan has been viewing him as a threat to the promotion of separatism in the valley. During the beginning of Pak-supported insurgency in the valley, pro-Pak forces set ablaze the memorial named after Maqbool Sherwani in 1988. During those days, one could easily hear the slogans of “Maqbool Sherawaniam beol, khudayan gol”, meaning “may the almighty destroys the seeds of Maqbool Sherwani’

Two weeks after his martyrdom, Mahatma Gandhi paid tributes to him in a prayer meeting in Delhi. Gandhiji shared his story in the meet and said, *... But within 48 hours of his cold-blooded murder and sadistic terror, Sherwani’s prophecy came true and the invaders ran pell-mell out of Baramula, with Indian Union troops in hot pursuit... This was a martyrdom, of which anyone, be he Hindu, Sikh, Muslim or any other, would be proud.”

Sharing reflections on his nature, Margaret Bourke White who travelled Baramulla just after the attack in December 1947 described Sherwani as “a sort of Robin Hood character, from stories the townspeople told me.” Similarly, Francis Rath, a scholar acquainted with Sherwani, described him as “happy-go-lucky...”

The valour of Maqbool Sherwani is still heard in chivalric tales, fables, parables, and folklore of the Kashmir valley. A number of youth groups have been formed on his name as well as several institutions have been operating there which bear his name on their respective titles.