BJP will now observe a 12-hour bandh in Basirhat on Monday. 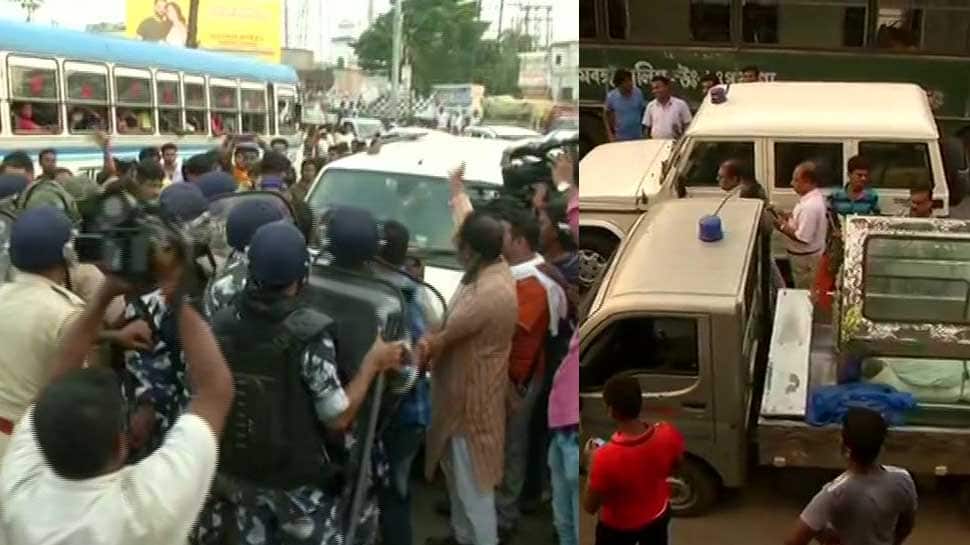 KOLKATA: In fresh tension in West Bengal, the state's police on Sunday blocked a procession being led by the state BJP leaders from advancing towards Kolkata.

According to reports, top state BJP leaders were leading a hearse of deceased party workers on the Malancha Road, which connects Basirhat to Kolkata, when they were stopped by the police.

West Bengal: Security forces stop BJP leaders in Basirhat while they were taking the remains of the deceased BJP workers to party office. pic.twitter.com/8xZzwRw0cT

The cops also stopped the vehicles of the BJP leaders, who wanted to take the dead body of the deceased party workers to the party headquarters in Kolkata to pay their last respects.

The BJP leaders were told that a procession with dead bodies cannot be allowed to enter Kolkata as it may lead to a law and order situation.

The delegation somehow managed to cross the Malancha Road, but it was stopped again by the policemen deployed on duty at Minakha.

Speaking to ANI, BJP MP from Hooghly Locket Chatterjee said, ''Families of the deceased want to take the remains to the party office but Mamata's police are stopping us saying that last rites will be held in the village. If the police don't leave, then the last rites will be done here on road.''

BJP supporters were seen bringing the wooden logs on the roads for the last rites of the deceased party workers.

However, after much persuasion, the BJP leaders agreed to take the dead bodies of the two deceased party workers to Sandeshkhali in Basirhat. The last rites of the deceased BJP workers will be performed tonight at Sandeshkhali.

BJP will now observe a 12-hour bandh in Basirhat on Monday.

Attacking the saffron party, the ruling TMC said, ''the BJP is doing whatever it wants, they (BJP leaders) are creating a circus, playing politics with the dead bodies in Bengal. Very sad."

The development comes at a time when the central government expressed ''deep concerns'' over reports of fresh violence in the state of West Bengal in which at least 8 people were killed in 24 Noth Parganas district on Saturday.

The Centre also issued an advisory to the Mamata Banerjee government in this connection.

''The Centre has expressed "deep concern" over continuing violence in West Bengal even after the conclusion of General Elections and issued an advisory to the State Government,'' a Union govt release said.

"The unabated violence over the past weeks appears to be a failure on the part of the law enforcement machinery of the state to maintain the rule of law and inspire confidence among people. It is strongly advised to ensure that all necessary measures are taken to maintain law and order, peace and public tranquillity. It is also requested to take strict action against officials found delinquent in the discharge of their duty" the Centre's advisory to the West Bengal government read.

The state's Governor, Kesari Nath Tripathi too expressed his concern about the violent incidents in Sandesh Khali, North 24 Parganas and other parts of West Bengal recently.

However, a blame-game continues between the ruling Trinamool Congress party and the BJP over rising violence and political murders in West Bengal.

Meanwhile, the BJP on Sunday announced ''Lalbazar Abhiyan'' to counter West Bengal government's charge that the saffron party was disturbing the law and order situation across the state.

The announcement of the march comes in the wake of allegations by the ruling Trinamool Congress blaming the saffron party for the declining law and order situation in the state and increasing violence after the BJP's victory in the recent polls.