Protests across the country are being organised on the martyrdom day of Ashfaqullah Khan and Ram Prasad Bismil on Thursday (December 19). 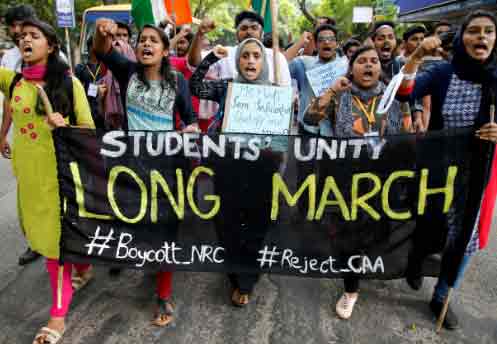 New Delhi: Protests against Citizenship Amendment Act (CAA) is gaining nationwide support after police action against the students of Jamia Milia Islamia University in Delhi and Aligarh Muslim University on Sunday. Different organisations, political parties, and students have decided to express their disapproval to the implementation of the Citizenship Amendment Act.

Notably, protests across the country would be organised at the following places on the martyrdom day of Ashfaqullah Khan and Ram Prasad Bismil on Thursday (December 19).

Here are the places where protests would be organised:

Uttar Pradesh police has clamped Section 144 in the state, asking people not to participate in any gathering. The UP DGP tweeted, "'Sec 144' is in force and no permission for any gathering has been given for 19.12.19. Pls do not participate. Parents r also requested to counsel their children."

Notably, nearly 1,000 students, many from the South Asian diaspora, gathered outside the Indian High Commission in London on Wednesday night to lodge their protest against the Citizenship Amendment Act (CAA) and the National Register of Citizens (NRC), under the banner of the South Asia Solidarity Group and the SOAS India Society.

Students at Cambridge University will be staging an anti-NRC and anti-CAA protest in Cambridge city on Thursday.

The Citizenship Amendment Act 2019 seeks to grant Indian citizenship to refugees from Hindu, Christian, Sikh, Buddhist and Parsi communities fleeing religious persecution from Pakistan, Afghanistan, and Bangladesh and who entered India on or before December 31, 2014.