Addressing over 1,400 students of the Sairam Engineering college, pursuing BTech Information technology and BE Computer science, the former Commander-in-Chief, Army said, in the coming times cyber warriors will be the people in academia, corporate world and not those who are in uniform. 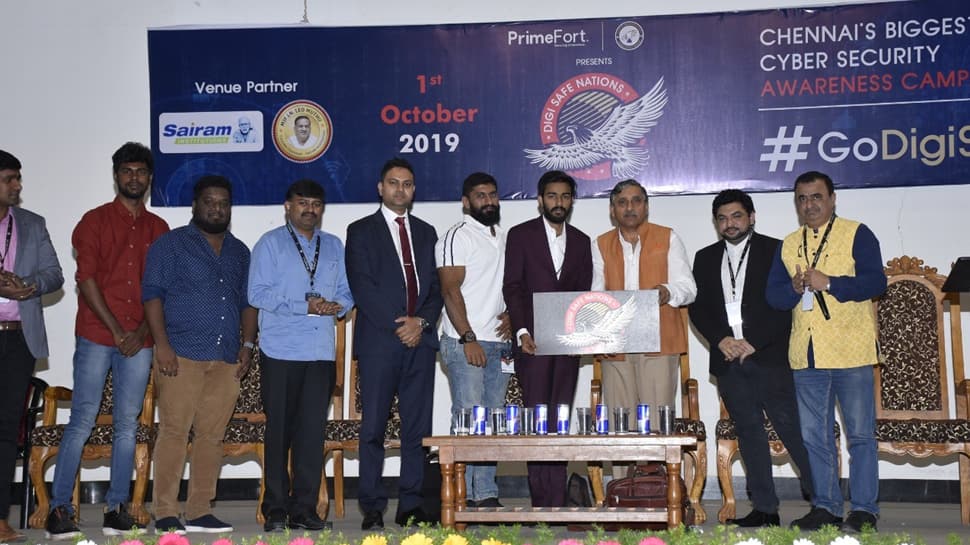 Chennai: Numerous WhatsApp messaging centres, groups in Pakistan are spreading authentic-looking misinformation on Kashmir, but we must only forward what is authentic and factual, said Former Army Lt General Arun Kumar Sahni while addressing a gathering of Engineering college students at a Cyber security awareness campaign in the city. “As our agencies continuously block these groups, pages, others crop up to spread this fake propaganda," he said.

Addressing over 1,400 students of the Sairam Engineering college, pursuing BTech Information technology and BE Computer science, the former Commander-in-Chief, Army said, in the coming times cyber warriors will be the people in academia, corporate world and not those who are in uniform. “We live in a cyber era, where a phishing attack can succeed in less than 4 minutes and 85 per cent of the breaches happen due to ten well-known vulnerabilities. In perception battles that are fought today, public opinion can be shaped without physical contact between forces.”

Highlighting that it could take up to 100 days for developed countries to detect a system breach, whereas it would take developing countries over a year for the same, Lt Gen Siani emphasized on the need for the Government to formulate more specific rules, regulation and legal provisions for the cyber domain. “We must be careful of the footprints we leave behind and ensure that they are not used against us," he told students.

Speaking at the event, Cyber-security expert Rakshit Tandon cited the importance of Sections 66, 67 of the IT Act and urged the students to understand what constitutes cybercrime. “In the year 2016, over 5000 people were arrested for Cybercrime, of which 3000 were college students and 98 were school children. Child pornography, hacking, online trafficking, online financial frauds, among others include cyber offences that are punishable in India.”

Tandon stated a recent case of a woman who had been conned 1.5 lakh Rs within minutes as she called a number that appeared to be of Google Pay Customer Service. “She was instructed by the criminal to install the Anydesk App, for better assistance. Then the hacker activated the Unified Payments Interface(UPI) and transferred all the money in less than 30 seconds. Apps such as Anydesk and Teamviewer can be used by hackers to take control of the computers or phones of unassuming users. These days hackers target phones due to the allure of digital wallets, they can also read our SMS by taking control of Applications that have permission to read Messages," he said.

Cyber Security Author Nipun Jaswal demonstrated how a micro-controller placed in a USB fan or an interface device can be used as a keyboard to hack into a computer, irrespective of its Operating System. “There is a perception that a particular brand and their operating system is more secure, but using certain methods it takes only a few seconds to break into a system, with or without anti-virus software. There are only two kinds of people the ones who know they are hacked and the ones who don’t know they are hacked,” Jaswal said.

The speakers also briefed the students on precautions such as two-factor authentication, regulating the permissions for all Apps, use of Yubikey etc. They also informed the students about government platforms such as Cyberdost, cybercrime.gov.in where one could get tips to stay safer in the online world, also post complaints when the need arises.

India at UNGA presented a clear choice between peaceful coexistence and pursuit of conflicts: Venkaiah Naidu