After unfurling the national flag from the rampart of Red Fort in Delhi, PM Modi lauded the efforts of COVID-19 warriors, freedom fighters and Olympians in his speech on the occasion of Independence Day. 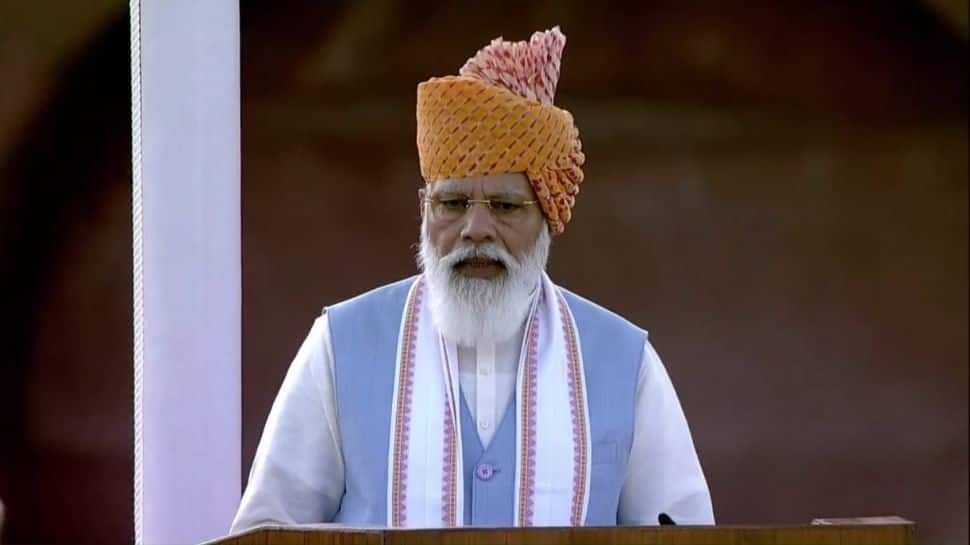 New Delhi: Prime Minister Narendra Modi praised the country's medical professionals who helped the nation in its fight against COVID-19, freedom fighters who turned the country into a united nation and athletes who took part in the Tokyo Olympics in his customary Independence Day speech.

After unfurling the national flag from the rampart of Red Fort in Delhi, PM Modi said, “I would like to begin by conveying greetings on this special occasion of Independence Day. This is a day to remember our great freedom fighters.”

Here are some of the important quotes from PM Modi's customary Independence Day speech:

The Prime minister also lauded the efforts of the ‘corona warriors’ of the nation and said, “Indians have fought this battle (COVID) with a lot of patience. We had many challenges but we worked with extraordinary pace in every area. It's a result of the strength of our industrialists & scientists, that today India doesn't need to depend on any other nation for vaccines.”

"During COVID, our doctors, nurses, paramedical staff, sanitation workers, scientists who were developing vaccines and crores of citizens who were working with a sense of service -all those who devoted every moment to serve others in this period, deserve our appreciation," PM added.

The prime minister also gave a call for 'Sabka Prayas' along with 'Sabka Saath, Sabka Vikas, Sabka Vishwas' for building a new India. "We have to ensure we meet our goal of building Aatmanirbhar Bharat when we celebrate 100 years of India's Independence," the prime minister said.

"Our mantra is 'Chhota kisan bane desh ki shaan'. It's our dream. In yrs to come, we've to further increase the collective strength of small farmers of the country, we will have to provide them new facilities. 'Kisan rail' runs on more than 70 rail routes of the country today," said PM.

The pain of partition was one of the greatest tragedies of last century, the prime minister said while asserting that August 14 will be remembered as Partition Horrors Remembrance Day. "We celebrate independence, but the pain of partition still pierces the chest of India," PM Modi said.

7. Our priority will be to ensure the services reach the last person

"Our priority will be to ensure that the services reach the last person seamlessly. For the all-round development of the nation, it is essential to end the unnecessary interference of govt and government procedures in the lives of people," PM Narendra Modi added.

"Today, we have to pledge to make India energy independent before completing 100 years of independence. India has moved towards electric mobility and work is underway on 100% electrification of Indian Railways with the aim to becoming net-zero carbon emitter by the year 2030," said the Prime Minister.

"There was a time when sports wasn't considered a part of the mainstream. Parents used to tell children that they would spoil their life if they kept playing. Now, awareness regarding sports & fitness has come within the country. We have experienced this in Olympics this time," said PM Modi.

"It's a major turning point for our country. In this decade we've to further speed up drive to bring in talent, technology& professionalism in sports in the country. It's a matter of pride that India's daughters are giving a splendid performance, be it Boards exams or Olympics," PM added.

10. Surgical strikes and airstrikes- Message of the emergence of a new India

"By conducting surgical strikes and airstrikes, we have given a message of the emergence of a new India to our enemies. It also conveys that India can take tough decisions," said PM Modi from the ramparts of Red Fort on Independence Day.

“I used to get messages from lakhs of women children that they want to study in Sainik schools. Today, the government has decided that doors of every Sainik School will now be open for the girl child,” he said.

Partition is one of biggest disasters of the previous century, says PM Narendra Modi