PM Narendra Modi to set up committee to examine ‘one nation, one election’ proposal

Defence Minister Rajnath Singh, however, said that Left and some other parties, raised concerns over the implementation of this proposal during the meeting. 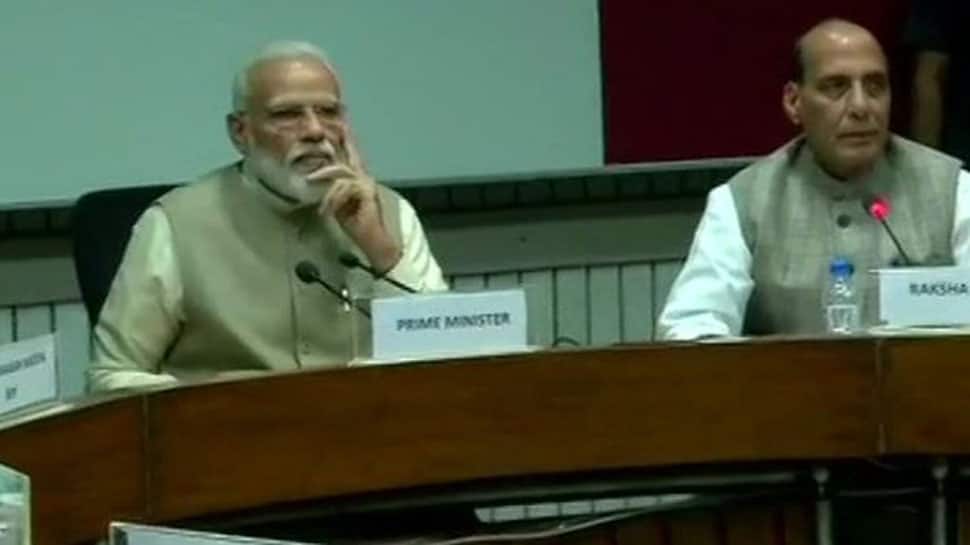 Prime Minister Narendra Modi on Wednesday chaired an all-party meeting and said that a committee would be set up to examine 'one nation, one election' proposal. Talking to reporters after the meeting Defence Minister Rajnath Singh said that concept of ‘one nation, one election’ received support from most political parties who attended the meeting. Singh, however, said that Left and some other parties, raised concerns over the implementation of this proposal during the meeting. The Defence Minister assured that the committee being set up by the prime minister would take into account the concerns of all political parties and would try to address these issues in best possible manner.

Defence Minister Rajnath Singh after conclusion of the meeting of Presidents of all parties called by PM Modi: We had invited 40 political parties, out of which Presidents of 21 parties participated and 3 other parties sent their opinion on the subjects in writing. pic.twitter.com/FgsjkEQotg

It is to be noted that several opposition parties, including the Congress, Trinamool Congress, BSP, DMK, TDP and AAP had skipped the all-party meeting. TMC chief and West Bengal Chief Minister Mamata Banerjee had said that on Tuesday that she will not attend the meeting. Mamata had said that it is a complex matter and more discussions is needed before calling a meeting over this proposal.

BSP’s Mayawati, SP’s Akhilesh Yadav, DMK’s MK Stalin, Telangana chief minister K Chandrashekar Rao, TDP chief N Chandrababu Naidu and AAP’s Arvind Kejriwal were some other notable leaders who decided to skip meeting but sent a leader from their party to represent them at the meeting.

Earlier on Tuesday, senior CPM leader Sitaram Yechury, who has openly opposed the idea of ‘one nation, one election’ plan, had said that he would attend the meeting and would oppose the idea during the meeting. Yechury said that idea is flawed and it is ‘fundamentally anti-federal and anti-democratic’.

Talking to media after the meeting, Yechury said, “On behalf of CPI (M), we presented our views on five issues. We're in favour of Mahatma Gandhi's 150th Jayanti, but checks should be placed on people supporting Godse. We appreciate 'Sabka Vishwas' slogan. We'd opposed 'one nation one election' in 1952 and 1957 too. It executed forcefully, it will be an anti-democratic and anti-federal move.”

Yechury added that NCP chief Sharad Pawar has also supported the CPM's stand. “Sharad Pawar has supported our stand. The truth is, this government wants to move towards a presidential form of Government,” he noted.

SP Chief Akhilesh Yadav, who also skipped the meeting, said his party will never accept a proposal like 'One Nation One Election'. "They should focus on the promises they have made to people, we hope they will work more on fulfilling those promises. Decisions like One Nation One Election, there are many parties that will never agree to it," he said.

Besides holding discussions on 'one nation one election' proposal, the leaders of different political parties also discussed plans to celebrate 75 years of Independence in 2022 and the 150th birth anniversary of Mahatma Gandhi this year during the meeting.