The magnificent cultural heritage of India was on full display on the first day of the second informal summit between Prime Minister Narendra Modi and Chinese President Xi Jinping in Tamil Nadu`s Mahabalipuram on Friday. 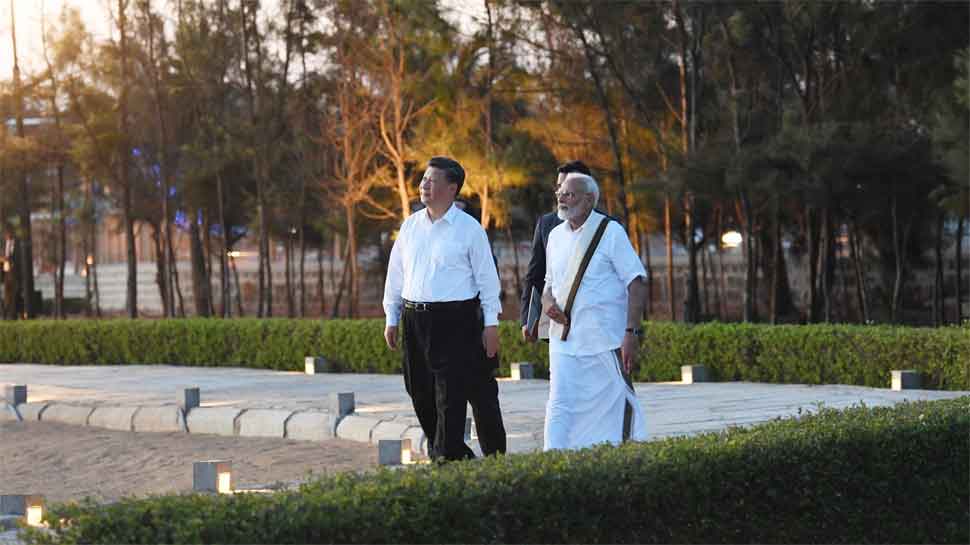 Mahabalipuram: The magnificent cultural heritage of India was on full display on the first day of the second informal summit between Prime Minister Narendra Modi and Chinese President Xi Jinping in Tamil Nadu`s Mahabalipuram on Friday.

President Xi informed the PM that he was overwhelmed with the kind of response he received upon arriving at Chennai airport. During the dinner, that lasted for over two hours, issues ranging from the economic deficit, new investment avenues, and how to enhance the trade volume and the trade value. It also included the issue of the trade deficit that exists and the unbalanced trade that exists.

Both the leaders also discussed the global issue of terrorism and radicalisation and observed that these were the common challenges faced by both countries. Further, both countires would work together to see that radicalisation and terrorism did not affect the fabric of our societies. Vijay Gokhale further said that PM Modi and President Jinping will discuss extensively on international issues during their meeting scheduled for Saturday.

A veshti-wearing PM Modi had received Xi in the afternoon in the historic coastal city, which is famed for its temples and architecture dating back to the Pallava Dynasty. PM Modi chose to wear a veshti with a white half-sleeved shirt and angavastram. He carried out the rest of the day`s engagements wearing the traditional attire.

The close ties shared between the two leaders shone through, as PM Modi took Xi on a guided tour of UNESCO World Heritage Sites like Arjuna`s Penance, Krishna`s Butter Ball, Pancha Rathas and the Shore Temple. While touring the magnificent Panch Rathas complex, the two leaders sat down to catch their breaths and sipped on fresh coconut water, which was quite a departure from the `Chai pe Charcha` that PM Modi is known for.

The two leaders enjoyed a thrilling cultural performance at Shore Temple`s complex in the evening. The programme showcased the Indian classical dance forms of Kathakali and Bharatnatyam to fast-paced Carnatic music, highlighting the region`s magnificent roots. At the special dinner hosted by PM Modi in Xi`s honour, the Chinese President relished the real taste of India. While a variety of Indian culinary delights were on display, a special focus was given to the South Indian cuisine. From Thakkali Rasam and Arachavitta Sambar to Kadalai Kuruma and Kavanarasi Halwa, the menu reflected the sweeping diversity of south Indian culinary traditions.

Earlier in the day, President Xi was accorded a grand welcome by people who lined the streets along with traditional drum players, creating a warm environment which personified the Indian belief of `Atithi Devo Bhava`.

The informal summit between the two leaders in Mamallapuram is a follow up to the inaugural meet which was held in Wuhan from April 27 to 28 last year. While no Memorandum of Understanding (MoU) or agreements will be signed during the two-day engagement, Xi and PM Modi are slated to hold one-on-one and delegation-level talks. The meeting between the two will not have a specific agenda, however, the focus of the meeting will be on improving people-to-people contact and on how to maintain peace and tranquillity along the India-China border.

According to the Ministry of External Affairs, the second informal summit provides an opportunity to the two leaders to continue their discussions on overarching issues of bilateral, regional and global importance and to exchange views on deepening India-China Closer Development Partnership.