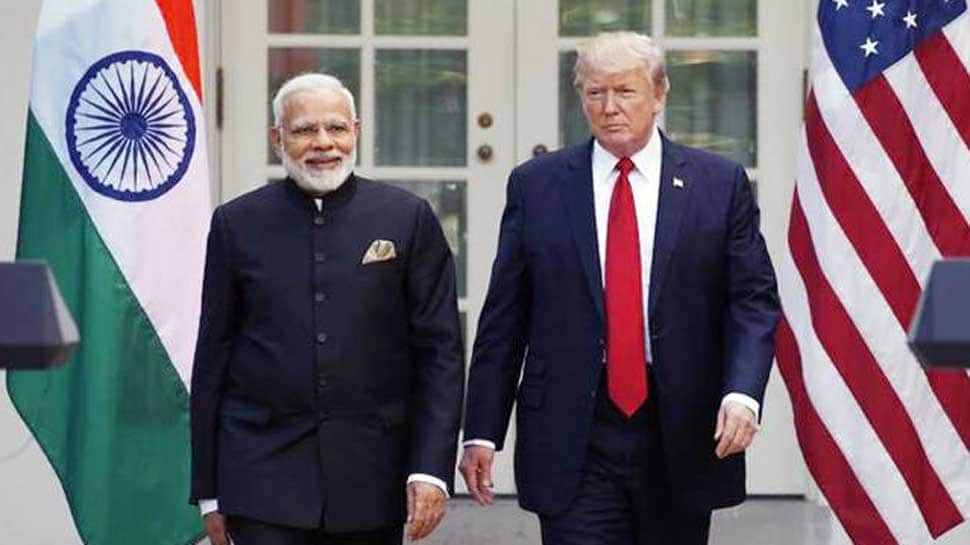 Image credits: PTI (File photo of Modi-Trump meet in US)
Share:
Written By:

WASHINGTON: Ahead of US Secretary of State Mike Pompeo's visit to India next week, the State Department has said that New Delhi is a crucial partner of the United States and remains confident that Prime Minister Narendra Modi's re-election will further deepen the bilateral ties between the two democracies.

The statement was made by a senior State Department official during a background briefing ahead of Mike Pompeo`s visit to India next week.

The official saw PM Modi`s re-election with a stronger mandate as something that will help in deepening ties with the US, especially in trade and business as it would mesh with his vision of building a strong India.

"PM Modi`s mandate strengthened the way he can implement his vision for a strong India that plays an important role in world affairs and the US wants to help achieve it by moving the relationship on an upward trajectory," the official added.

Sharing more details about Pompeo's India trip and issues which are likely to be covered, the official said, ''With respect to India, the purpose of the trip is for the Secretary to broaden and deepen our relationships in New Delhi. And while there, the Secretary is going to meet with Prime Minister Modi and his new counterpart, Minister of External Affairs Jaishankar, who’s really one of the visionaries behind the expansion of the US-India Strategic Partnership.''

''Prime Minister Modi’s historic win and his sweeping mandate in recent elections offer, we believe, a unique opportunity for him to implement his vision for a strong and prosperous India that plays a leading role on the global stage. And so we want to seize this moment early in his second administration to accelerate what has been the upward trajectory of our relationship and to set some ambitious goals,'' he added.

On the ongoing trade tensions between the two countries, the official said, ''We have a solid foundation to build on. The US-India partnership is grounded in a shared commitment to democratic values and the rule of law. India is a crucial partner in the Donald Trump Administration’s vision for a free and open Indo-Pacific region. It shares our concerns about challenges to our shared interests in the region. We’ve had extraordinary cooperation with India in the broader Indo-Pacific this past year. I’d point to the recent group sale along with the Philippines in the South China Sea, and our reinvigorated quadrilateral dialogue with Australia and Japan, which has met four times since 2017, including just recently in Bangkok at the end of May.''

The official pointed out that trade will be an important part of Pompeo`s interactions in New Delhi.

He will seek to "jump-start a discussion on trade and move quickly to resolve long-standing irritants", the official said, while acknowledging that they are not going to be resolved in one meeting but it will have to be a credible process.

The official, however, regretted that although bilateral trade has increased and US deficits have come down, India did not offer US companies a level playing field.

US official says Mike Pompeo's India visit aims to deepen ties between both countries: Here is the full text