PM Modi is the first world leader to visit Sri Lanka following the terror attacks which claimed around 250 lives. 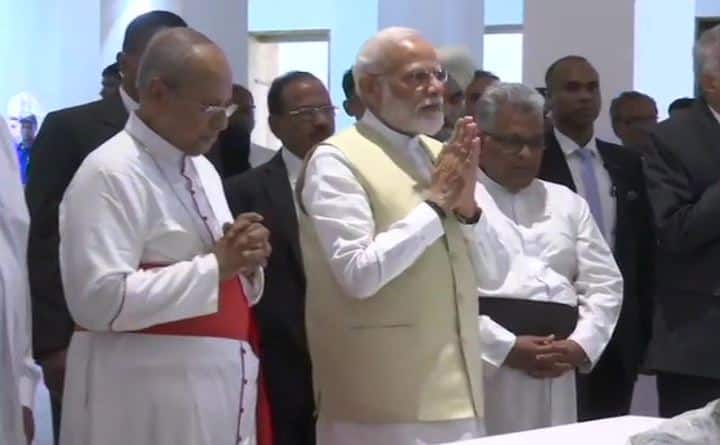 COLOMBO: Prime Minister Narendra Modi on Sunday visited Sri Lanka's St Anthony`s Church, which was targeted during the Easter terror attacks and paid his respects to those who were killed in the ghastly attack. "Started the Sri Lanka visit by paying my respect at one of the sites of the horrific Easter Sunday Attack, St. Anthony`s Shrine, Kochchikade. My heart goes out to the families of the victims and the injured," PM Modi tweeted.

Started the Sri Lanka visit by paying my respect at one of the sites of the horrific Easter Sunday Attack, St. Anthony's Shrine, Kochchikade.

My heart goes out to the families of the victims and the injured. pic.twitter.com/RTdmNGcDyg

PM Modi is the first world leader to visit Sri Lanka following the terror attacks which claimed around 250 lives and his visit sends a clear message to Colombo and global community that New Delhi will always support its South Asian ally and friend. "I am confident Sri Lanka will rise again. Cowardly acts of terror cannot defeat the spirit of Sri Lanka. India stands in solidarity with the people of Sri Lanka," PM Modi remarked.

"India is with Sri Lanka on the fight against terrorism," Ministry of External Affairs Spokesperson Raveesh Kumar tweeted. The prime minister embarked on his two-day visit to Maldives and Sri Lanka on Saturday. This is PM Modi's first overseas bilateral engagement after being sworn-in as the Prime Minister for a second term.

Earlier, PM Modi was accorded a ceremonial welcome on his arrival at Colombo airport by his Sri Lankan counterpart Ranil Wickremesinghe. "Happy to be back in Sri Lanka, my third visit to this beautiful island in four years. Share the warmth shown by the people of Sri Lanka in equal measure. India never forgets her friends when they are in need. Deeply touched by the ceremonial welcome," PM Modi tweeted.

PM Modi decided to visit the island nation after receiving an invitation from Sri Lankan President Maithripala Sirisena. The prime minister is also scheduled to meet Sirisena during his stay in Sri Lanka. After meeting Sirisena, PM Modi will meet the Leader of the Opposition Mahinda Rajapakse, a former President, and a delegation of the Tamil National Alliance (TNA). Before returning to New Delhi, PM Modi will offer prayers at Tirupati temple in Andhra Pradesh.