The MEA issued a statement condemning Pakistan for its inaction against terror groups.

NEW DELHI: The Government of India (GoI) India has yet again slammed Pakistan for claming that it is not aware of terror outfit Jaish-e-Mohammed's presence on its soil and denying any role in Thursday's worst suicide attack on a CRPF convoy in Jammu and Kashmir's Pulwama.

The Ministry of External Affairs (MEA) issued a statement saying, ''JeM has claimed responsibility for the attack. The organisation and its leadership are located in Pakistan. LeT and other terror groups have welcomed the news of the attack. These groups are also based in Pakistan. Pakistan cannot claim that it is unaware of their presence and their activities." 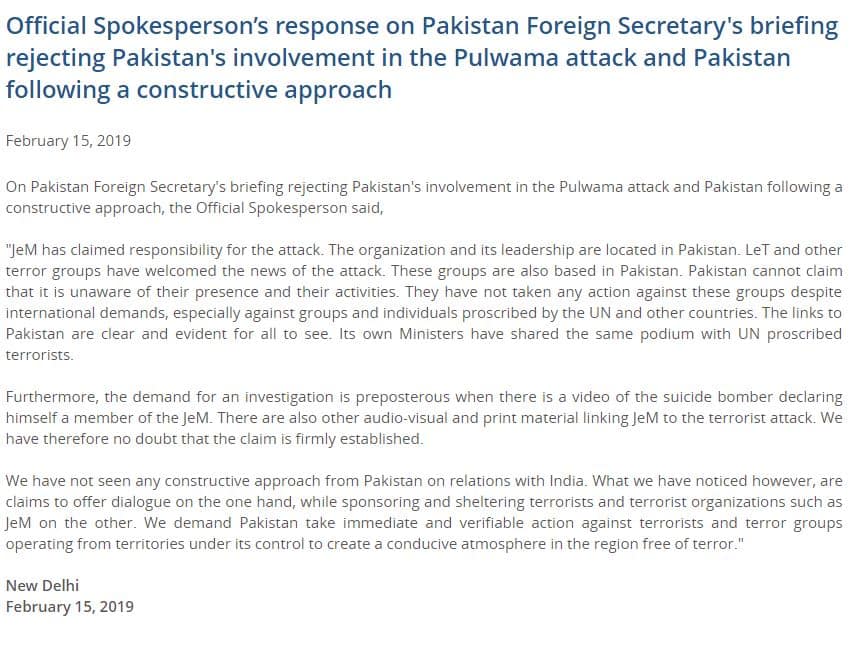 The MEA statement further, "they have not taken any action against these groups despite international demands, especially against groups and individuals proscribed by the UN and other countries. The links to Pakistan are clear and evident for all to see."

"Its own Ministers have shared the same podium with UN proscribed terrorists,"
the MEA statement added.

In September 2018, Pakistan's Religious Affairs and Inter-faith Minister Noor-ul-Haq Qadri shared a platform with Hafiz Saeed and both made anti-India statements.

Last year, a video surfaced in which Pakistan's Minister of State for Interior Shehryar Khan Afridi had openly expressed the support of current Imran Khan Administration to Hafiz Saeed and his organization.

In the first week of February, Hafiz Saeed carried out a massive rally in Lahore.

India also categorically rejected Pakistan's demand for an "investigation" since there exists a video of the suicide bomber declaring himself a member of the JeM. Audio-visual and print material linking JeM to the terrorist attack is present too which MEA said leaves "no doubt that the claim is firmly established."

MEA said, 'What we have noticed, however, are claims to offer dialogue on the one hand, while  sponsoring and sheltering terrorists and terrorist organizations such as JeM on the other."

India's official stance on Pakistan has been talks and terror cant go together but talks on terror can happen.

Meanwhile, India on Friday briefed about Pakistan's involvement in Pulwama attack to P5 countries along with South Asian countries, Japan, Germany. On Saturday India will be briefing ASEAN ambassadors.