It also sought that strict disciplinary action must be taken against any office-bearer or member of the Legislative Party who indulges in activities against the Congress government or gets involved in any conspiracy. 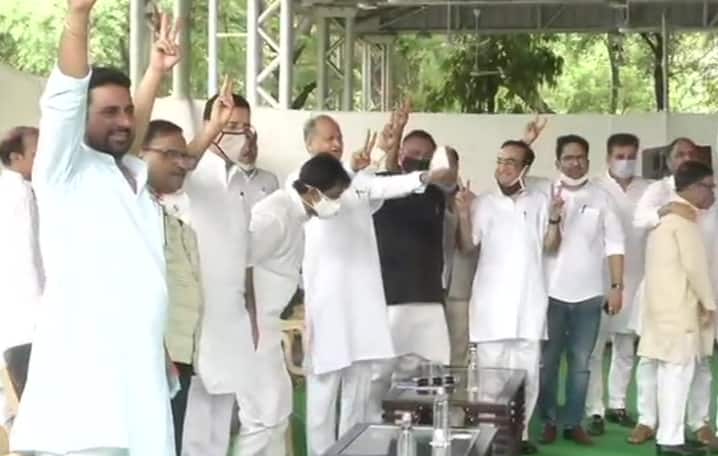 New Delhi: Rajasthan Congress Legislature Party (CLP) on Monday (July 13) passed a resolution supporting the Ashok Gehlot-led government in the state. In a show of strength, 109 MLAs turned up at the chief minister’s residence ahead of the meeting, which was called by the party amid the crisis caused by deputy CM Sachin Pilot’s rebellion.

The resolution passed at the CLP meeting, however, expressed its confidence in Congress President Sonia Gandhi and leader Rahul Gandhi, and unanimously supported the government led by Ashok Gehlot. It also praised the Gehlot-le government for doing pro-people decisions in the past one-and-half-year. The resolution also flayed the BJP for hatching conspiracy to destabilise the state government.

It also sought that strict disciplinary action must be taken against any office-bearer or member of the Legislative Party who indulges in activities against the Congress government or gets involved in any conspiracy.

Meanwhile, top Congress leaders, including Rahul Gandhi and Priyanka Gandhi, are understood to be in touch with Sachin Pilot and are trying to placate him, a day after the Rajasthan Deputy CM declared open rebellion against Chief Minister Ashok Gehlot, according to sources.

The top Congress leaders have talked to Pilot and have asked him not to rebel against the chief minister, assuring assured him that his grievances would be redressed at the party level. Besides Rahul Gandhi and Priyanka Gandhi, other Congress leaders who are learned to have spoken with Pilot are Ahmed Patel, former Union finance minister P Chidambaram and AICC general secretary K C Venugopal.

It was not immediately known what transpired during the discussions. Pilot reportedly claimed that the Ashok Gehlot government is in minority and that he has the support of over 30 MLAs in the 200-member Assembly.

Sachin Pilot, who is in Delhi, has not been taking calls of many party leaders. AICC general secretary in-charge for Rajasthan Avinash Pande has said that Pilot has not been responding to calls and messages have been left with him.

Pilot has raised a banner of revolt against Gehlot after the special operations group (SOG) of Rajasthan Police sent a notice to him for appearing before it in the case involving "horse-trading" of MLAs in the state.

The SOG has registered an FIR in this regard and has also sent notices to the chief minister, chief whip of Congress, and some ministers and MLAs. Sachin Pilot, who is also the state Congress president, is miffed with Gehlot and has alleged that he was not being kept in the loop on key decisions.