Expressing his regret for thrashing an Air India employee last month, Shiv Sena lawmaker Ravindra Gaikwad on Thursday wrote a letter to Civil Aviation Minister Ashok Gajapati Raju and requested him to lift the travel ban, which was imposed post the incident. 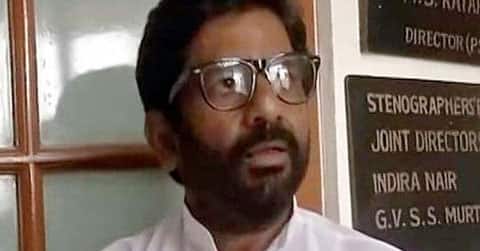 "It could have been no one's intention to have let the situation aggravate to the level that it eventually did. While the on-going investigation will bring out the factual sequence of events to fix, this incident may kindly not be seen as a reason for likely recurrence of such an event in future also," the letter read.

"I would request you to lift this restriction and let the investigation eventually determine the circumstances which led to the incident," it adds.

This came hours after Air India, according to sources, decided to lift the travel ban on the Shiv Sena leader if he tenders an apology.

Earlier today, the Shiv Sena threatened to boycott the NDA meeting if the ruling dispensation failed to resolve the matter by April 10.

During the Zero Hour, there were unruly scenes with the Shiv Sena members protesting against the ban and even thumping the desk of the Civil Aviation Minister in anger.

Gaikwad tendered an apology to the Parliament but insisted that he owed no apology to the airline official as he sought removal of the ban imposed on him by domestic airlines.

He presented his defence in the Lok Sabha, stating, "I apologize to Parliament, but not to him ( Air India staffer)."