Cyril Ramaphosa will be the chief guest at the 2019 Republic Day parade and also attend the ‘At Home’ hosted by the President Ram Nath Kovind in the afternoon of January 26, 2019. 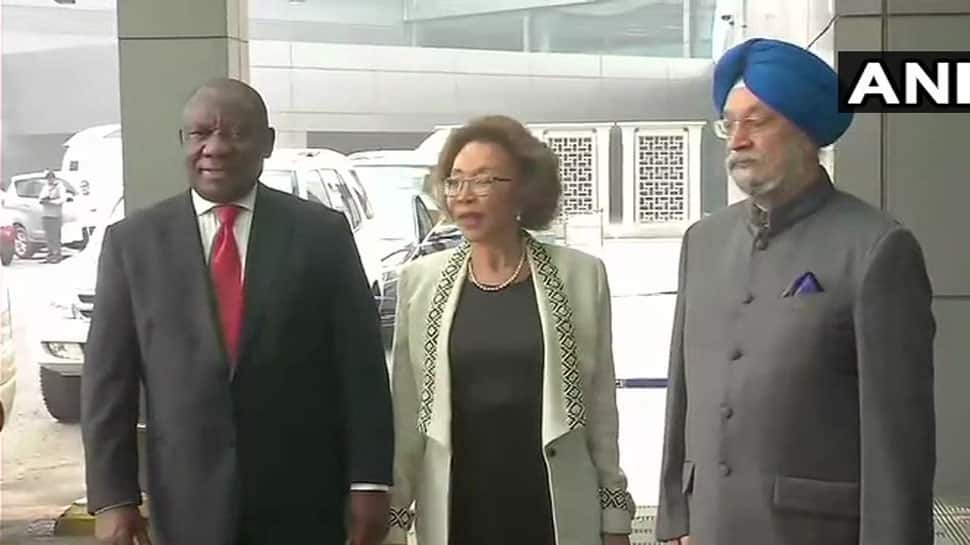 Ramaphosa, who is accompanied by First Lady Dr Tshepo Motsepe and a high-level delegation of nine ministers and a large business delegation was received at the airport by Urban Development Minister Hardeep Singh Puri.

After a cermonial welcome at the Rashtrapati Bhawan, the South African President will address the India-South Africa Business Forum, with the objective to grow business ties between the two countries.

During his two-day visit, Ramaphosa will also deliver the Gandhi-Mandela Freedom Lecture organized by Indian Council of World Affairs under IBSA framework as a part of the celebrations of the 15th Anniversary of IBSA.

Ramaphosa will be the chief guest at the 2019 Republic Day parade and also attend the ‘At Home’ hosted by the President Ram Nath Kovind in the afternoon of January 26, 2019. According to the Ministry of External affair, this visit by South Africa President is expected to further strengthen and enhance the close relationship between India and South Africa, which has shared "close and multifaceted strategic partnership since 1997, which is underpinned by historical, cultural and economic linkages".

It is worth noting, that bilateral trade has increased to the USD 10.65 billion in 2018-19 from the USD 9.38 billion in 2017-18. Both countries share close cooperation in the areas of vocational training, capacity building etc.

The two countries share a common vision on a range of global issues and closely cooperate in various multilateral fora: United Nations, BRICS (Brazil, Russia, India, China and South Africa), G-20, Commonwealth,  Indian Ocean Rim Association and the India, Brazil, South Africa dialogue forum.Both Prime Minister Modi and President Ramaphosa have met thrice in 2018 since the latter assumed office in February 2018 – on the margins of the Commonwealth Heads of Government Meeting in London, BRICS meeting in Johannesburg and the G20 summit in Buenos Aires in Argentina.