MK Stalin says the AIADMK government in Tamil Nadu must be held accountable for the prevailing situation and be ousted from power. 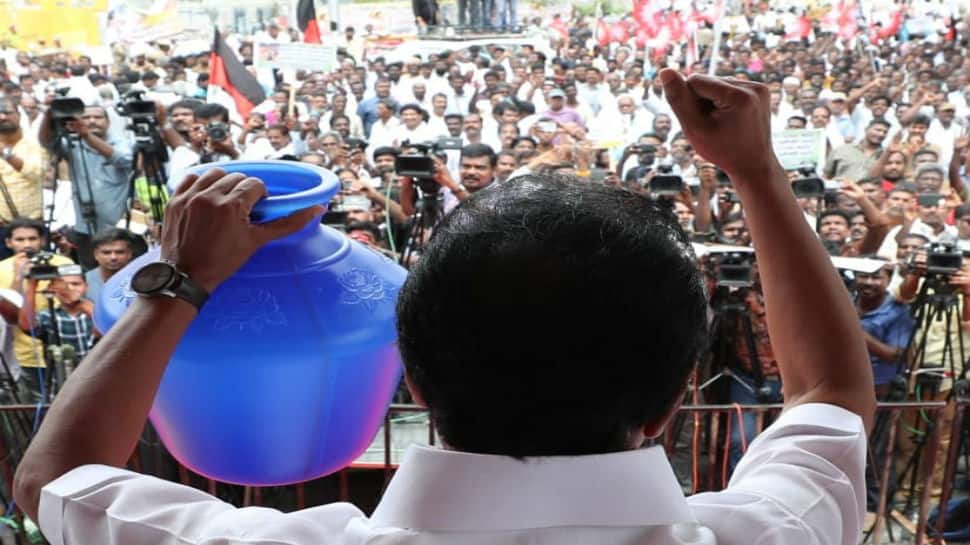 Chennai: Brandishing empty pots that read 'Pot is here, where is water?', DMK party functionaries and cadre - led by Tamil Nadu's Opposition Party Leader M K Stalin - gathered in large numbers on Monday to protest against the EPS-led AIADMK government's handling of the prevailing water crisis in Chennai and Tamil Nadu that only seems to be getting worse.

Addressing the gathering, DMK President Stalin claimed that such protests and agitations condemning the government were not limited to Chennai but are taking place across Tamil Nadu.

Accusing the state government of facing a crisis in every realm, Stalin said, "The government is facing a fund crunch, lack of employment opportunities, shortage in number of industries, law and order is in a bad state, but the senior AIADMK leaders including the Chief Minister, Deputy Chief Minister and the Ministers choose to remain ignorant about it."

Stating that the prevailing water crisis is not a sudden phenomenon, the DMK president said that in the last one year, all the lakes and reservoirs that store water in the vicinity of Chennai have been drying up. "I highlighted the evidence in the Assembly but it fell on deaf ears."

Lashing out at the AIADMK leaders who said that the water crisis was being exaggerated, Stalin said, "Ladies are waiting on the streets with buckets and pots and the state ministers are conducting special poojas for rains. But these poojas are not for water or rains but for the incumbents to ensure the survival of their government."

Mentioning the TN Assembly that is to convene on May 28th, Stalin said, "We have already issued a notice for initiating no-Confidence proceedings against the Speaker but we also believe that it is Chief Minister Edappadi K Palaniswami that must be ousted. Even without election, we can oust this government and what the people expect is going to happen."

Responding to the DMK's charges, Tamil Nadu's Fisheries Minister D Jayakumar quoted the Deputy Chief Minister O Panneerselvam and said, "We are facing a water shortage and not a crisis. The government is taking adequate measures to tide over it."

Hitting back at the DMK over the party treasurer Durai Murugan's comments opposing the plan of bringing water to Chennai from nearby districts, Jayakumar said, "Stalin and Duraimurugan live in Chennai and drink the water drawn from here, but why are they saying that water from Jolarpet should not be brought to Chennai? Is it not betraying the people of Chennai? This only reflects DMK's jealousy."