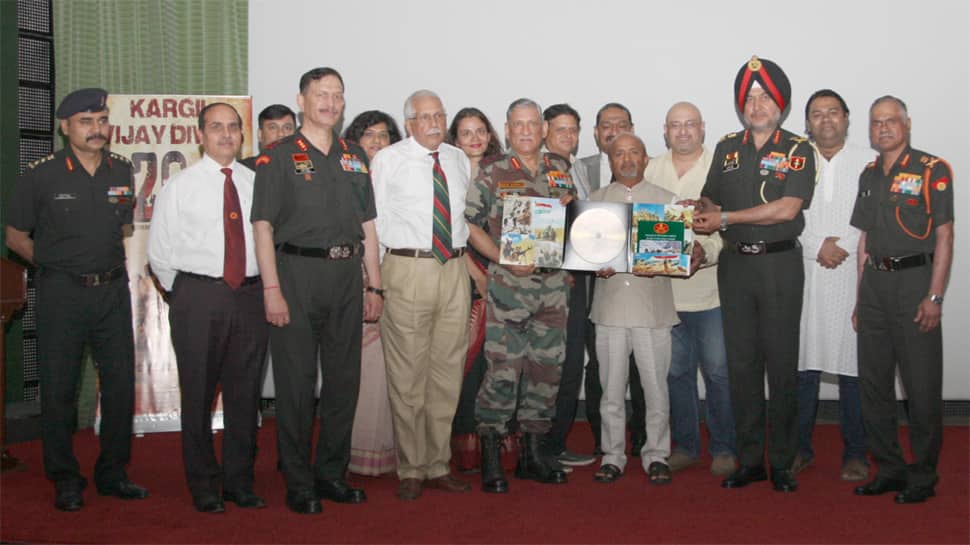 A series of events are being organised to commemorate India's victory in Kargil War twenty years ago on 26 July. Chief of the Army Staff General Bipin Rawat on Friday released a tribute song on Kargil to honour, salute and pay homage to the Kargil martyrs and war veterans.

The song, released at a grand ceremony at Manekshaw Centre in Delhi, has been composed by eminent Hindi lyricist Sammer Anjaan and sung by Shatadru Kabir. The music has been composed by Raju Singh. The beautiful rendition features several actors including Amitabh Bachchan, Salman Khan, Vicky Kaushal among others.

#Kargil Victory is the #Victory of the Nation, victory of our #Courage #Valour #Sacrifice#Kargil #Tribute #Song 'An Ode to the Kargil Soldier' released at New Delhi by General Bipin Rawat #COAS on 05 July 2019. #IndianArmy #20YearsOfKargilVijay https://t.co/6Sp05ccOoC

Operation Vijay involved major operations to evict Pakistani intruders from Indian territory on the icy heights of Dras, Kargil, Batalik and Turtuk and bears witness to the courage, valour and sacrifice of the soldiers of the Indian armed forces. The 20th anniversary celebrations are aimed at ‘Remembering their sacrifice’, ‘Rejoicing in their victory’ and ‘Renewing the pledge’ to go beyond the call of duty when called upon.

Also on Saturday, to commemorate the victory in the Battle of Tololing during the Kargil War, a trekking expedition to Tololing Top was undertaken by the 2 Rajputana Rifles (RAJRIF) to honour and celebrate the victory achieved amidst harsh terrain and weather conditions.

The objective of the trek during these celebrations was to evoke the spirit of patriotism and pay homage to the gallant soldiers of the Kargil War, an official statement said.

The battle of Tololing was a turning point in the progress of operations during the Kargil War. The iconic Tololing feature stands aloft in Drass Sector as a testimony to the sacrifice, grit and perseverance of troops of the Indian Army who were undeterred to recapture this feature occupied by enemy intruders.

The trekking team of the 2 RAJRIF consisting of One Officer, One Junior Commissioned Officer and twelve Other Ranks were flagged off from Jaisalmer on June 22. After inducting into Leh, the team completed its mandatory acclimatisation and necessary preparations by July 3. The team then set forth on the arduous task of summiting Tololing Top and successfully completed the same today.

At the summit, the team was received by Lt Gen Ranbir Singh, General Officer Commanding in Chief of Northern Command. Singh lauded the efforts of the trekking team and reaffirmed the objective of the trek to foster the spirit of patriotism and pay homage to all gallant soldiers who had fought the Kargil War, the statement said.