United India Rally: Who said what at the mega Opposition rally in West Bengal

With BJP's recent defeats in Assembly elections. Mamata Banerjee has raised the pitch to be united against the saffron party in the 2019 general election. 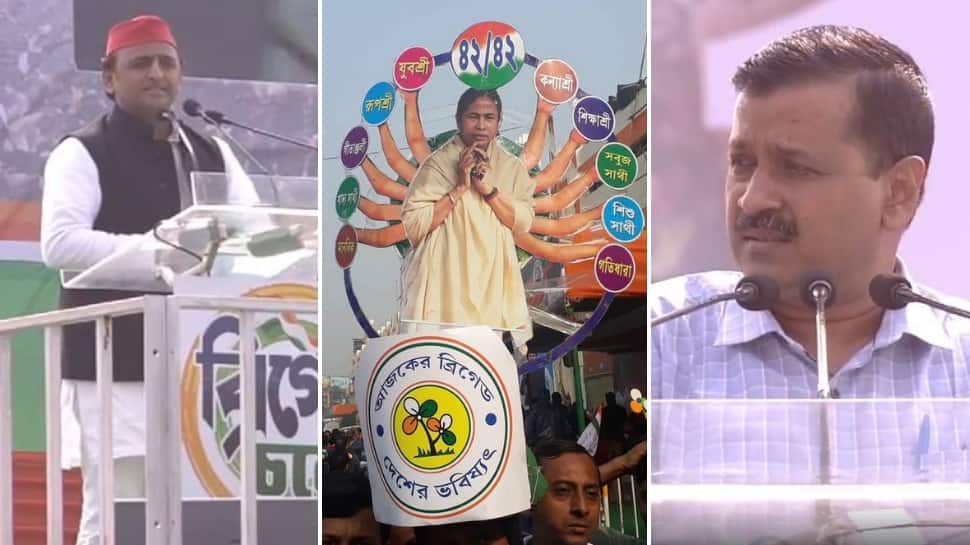 'United India Rally': As it happened

- The United India rally ends with the slogan "Badal do, badal do, Dilli mein sarkar badal do"

- Mamata Banerjee: A new government will be formed at the Centre. It is inevitable. Their expiry date has come. This is people's verdict

- Mamata Banerjee: We will work together to bring a new dawn for the country. If we want to work for the betterment of all sections of the society, we need to remove the BJP from power.

- RJD leader Tejashwi Yadav: We are not afraid of intimidation tactics. We have to save the country.

- BJP MP Shatrughan Sinha: The mood of the nation is Parivartan. People want a new leadership. When we will seek answers on Rafale, they will take us back to issues like Ram Mandir. Why suddenly just before the elections?

- BJP MP Shatrughan Sinha: During Atal Behari Vajpayee's tenure, there was a democracy, now there is dictatorship.

- BJP MP Shatrughan Sinha: I am not answerable to the people of the country not to the BJP. If I am speaking for the benefit of the country, how can I be speaking against the party?

- Congress leader Mallikarjun Kharge reads a message from UPA chief Sonia Gandhi: The upcoming general elections will be based on the faith of restoring democracy in our country.

- Andhra Pradesh Chief Minister Chandrababu Naidu: We have only one mission - Save India. Save democracy. The country is not in a condition to control price rise or handle any crisis in states. BJP wants to destablise the state governments.

- Delhi Chief Minister Arvind Kejriwal: "Those asking who will become the PM in 2019 elections, I just want to say that the polls will not be about electing a leader but about removing Modi and Amit Shah. Do anything to send the duo away."

- Delhi Chief Minister Arvind Kejriwal: "PM Modi and Amit Shah have divided the country on religious lines. The lakhs of people who have gathered here have come with the conviction to remove the Modi government from the Centre.

- Mamata Banerjee to Akhilesh Yadav: You make sure BJP gets a zero in Uttar Pradesh, we will make sure they are not able to open their account in West Bengal.

- Former Uttar Pradesh CM and SP chief Akhilesh Yadav: Since the day the BSP and SP joined hands, BJP has been having a series of meetings even to win on a single seat from Uttar Pradesh.

- Former Uttar Pradesh CM and SP chief Akhilesh Yadav: With this rally, the people of the country will be able to take a decision on who to support. It would be great that there is a new PM in this new year.

- Former Uttar Pradesh CM and SP chief Akhilesh Yadav: We are criticised for having many leaders, but is that a bad thing? Among us, the leader who gets the support of the people will become the PM. But does BJP have any other candidate apart from PM Modi?

- Karnataka Chief Minister HD Kumaraswamy: "Regional have the strong instinct to connect with the people and protect the interests of their States"

- BSP MP Satish Misra: "The BJP is lying to the people for votes, there is a rise in unemployment level and farmers, labourers, minorities, Dalits are being persecuted.

- DMK President MK Stalin: The upcoming general elections in May will be the second freedom struggle of the country. People from different regions of the country have assembled together and we just have one purpose - to defeat BJP and Narendra Modi and save the country. We have come together with just one aim.

- Former Chief Minister of Jammu and Kashmir, Farooq Abdullah: "The BJP is dividing people on the basis of religion. We must all come together to defeat the divisive forces."

- Farooq Abdullah yet again raises the issue of faulty EVMs, says no other country in the world uses these machines. He demanded that the EVMs should be banned from the poll process.

Members of TMCP on their way to Brigade Parade Grounds #UnitedIndiaAtBrigade pic.twitter.com/1OXOOcx7Z4

- Congress leader and Rajya Sabha MP Abhishek Manu Singhvi: A rainbow of political parties can be seen at this stage today. The time for a coalition has arrived. Politics of revenge has never been played in the country. Even in the past when BJP was in power, they never did this, unlike the present government.

- Former Union Minister Arun Shourie: No other government has lied so much. Never before were institutions undermined in this manner. Till now it was just one person - Narendra Modi - who was uniting the Opposition till now. Now when Mamata Banerjee has taken charge, we should ensure that Opposition is united.

- Former Union Minister Yashwant Sinha: "This is not about removing one man from power. We have come together to defeat an ideology. If Opposition agree to field just one candidate against the BJP, we can defeat them and remove them from power. They said 'sabka saath sabka vikas' but after five years they took everyone's support but did not work for everyone's development."

- Gujarat MLA Jignesh Mewani: The country is passing through an unprecedented crisis. All parties have to come together to defeat BJP and RSS.

- Senior JMM leader and former Jharkhand chief minister Hemant Soren: The manner in which the country is run, is dangerous for the nation.

- Crowds begin to swell at Brigade ground in Kolkata. The All India Trinamool Congress tweeted that lakhs are present at the rally venue.

Lakhs and lakhs of people are on their way to #UnitedIndiaAtBrigade rally. One hour to go... pic.twitter.com/ayYmXCM7k0

Less than an hour to go... People are eagerly waiting to listen to the leaders at #UnitedIndiaAtBrigade rally. pic.twitter.com/H3YSFfrJ9C

By putting the traffic on stand still & harassing the general public, TMC wants to stand up for the state’s well fare? How ironical! I urge all to share their today's traffic woes. #NaMoAgain @narendramodi @AmitShah @BJP4India @BJP4Bengal @KailashOnline

TMC has a large fund base for the rally but not for the state? Kolkata will witness a show of hypocrisy today.#NaMoAgain #AbkiBaarPhirModiSarkar@narendramodi @AmitShah @BJP4India @BJP4Bengal @KailashOnline

- BJP on Saturday mocked TMC's opposition rally, saying the leaders who have individually faced defeat are now coming together to try their luck.

- Ahead of the rally, Mamata tweeted: "Only few hours to go for the historic 'United India Rally' at Brigade Parade Grounds. I welcome all national leaders, supporters and lakhs of people to participate in today's rally to pledge to build a stronger, progressive and united India #UnitedIndiaAtBrigade".

Only few hours to go for the historic 'United India Rally' at Brigade Parade Grounds. I welcome all national leaders, supporters and lakhs of people to participate in today's rally to pledge to build a stronger, progressive and united India #UnitedIndiaAtBrigade

- Massive preparations have been made to ensure that the event is a success. Besides the huge stages that have been made for the event, 20 watch towers have been erected and 1,000 microphones and 30 LED screens put up so that the spectators can see and hear the speeches of the leaders clearly.

- Bahujan Samaj Party (BSP) president Mayawati will not attend the rally, but senior leader of her party Satish Chandra Mishra will be present on her behalf.