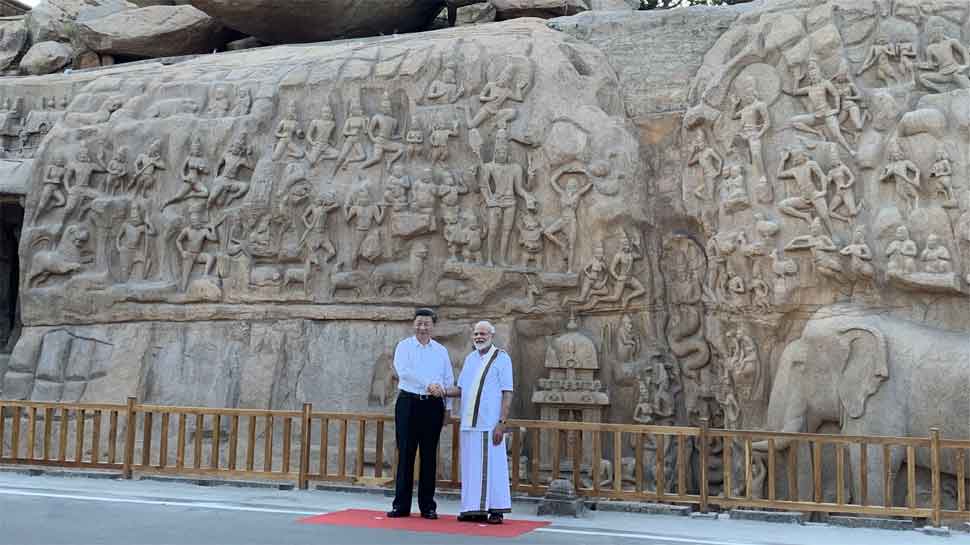 For the crucial meet in the historic coastal city of Mamallapuram, PM Modi donned the traditional outfit of Tamil Nadu and wore a white veshti with border, a white half-sleeved shirt and a bordered angavastram.

Known with different names in various south Indian states, Veshti is a cloth piece that covers the lower part of the body and is draped from around the waist. This rectangular piece of cloth, which is unstitched, and measures about five yards in length bears the signature of the South Indian heritage and gives a man an elegance inherent to his own culture.

Dhoti is paired with a white or an off-white shirt when worn on formal occasions and is accompanied with an Angavastram, a piece of cloth or stole, worn by men from the Hindu community, which is draped over the shoulders. It is a long rectangular cloth meant to cover the torso. This piece of clothing is generally worn with the South Indian dhoti or veshti especially among the Brahmins and their temple priests. The Angavastram was devised as a solution to ensure that a devotee is not wearing dirty cloth while worshipping his diety. This cloth, draped over one shoulder, serves as a napkin or handkerchief of sorts so that devotees can clean their hands on this garment and then discard them to one side immediately, before beginning their rituals and prayers.

Veshti, or Dhoti as is it called in North India bears a special place in the minds of South Indian men. In Tamil Nadu, it is customary to wear an elegant veshti while entering a temple sanctum and almost every bridegroom can be seen donning a veshti for his marriage ceremony.

On Friday, Chinese President Jinping arrived in India for the second India-China informal summit. PM Modi tweeted in Chinese, Tamil and English welcoming President Xi to India. On his arrival to Mahabalipuram, PM Modi gave a tour to the President of China of three important UNESCO world heritage sites, Arjuna’s Penance, Panch Rathas and Shore Temple in Mamallapuram. The town has a rich history and during the Pallava empire, it is believed to have been an important trading-post connected with China.

Mahabalipuram, or Mamallapuram, was chosen as the spot for the crucial meet by PM Modi himself and the process to hold arrangements for the informal summit started in June 2019. India sent its first recce team in June to the town. While history played an important role, the fact that PM Modi is keen to have big summits outside national capital also played the clincher. PM Modi will also be gifting the Chinese President, though it has not been disclosed what will be given by the Indian side.