Villagers carry patient on cot due to lack of road connectivity

A video surfaced online where villagers from Madhya Pradesh's Damoh can be seen carrying a man on a cot through a river and farm. 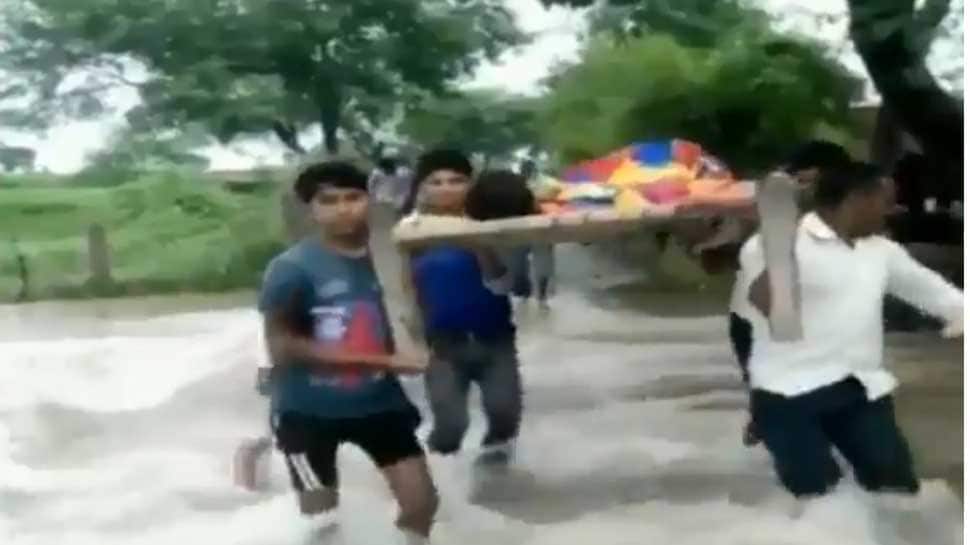 A video surfaced online where villagers from Madhya Pradesh's Damoh can be seen carrying a man on a cot through a river and farm.

A video from Madhya Padesh's Damoh has surfaced online in yet another case of lack of medical services where villagers can be seen carrying a man on charpai (cot) through a farm and river.

#WATCH: Villagers carry a patient on a charpoy (cot) across a flooded river due to lack of road connectivity in Damoh. #MadhyaPradesh (8.9.2018) pic.twitter.com/NcalbaurxA

Due to lack of road connectivity, villagers decided to carry the man on foot to take him to the hospital.

The villagers can be seen crossing a flooded river in the video released by ANI.

This is not the first case of lack of healthcare services in the state.

In a similar incident, a man from Madhya Pradesh's Tikamgarh had to carry the dead body of his mother (Kunwar Bai) after she had died due to snake bite. The hospital in Mohangarh, where the post-mortem was to be conducted, had denied sending a hearse van for the deceased. Thereafter, Kunwar Bai's son and her relatives brought her body on a motorcycle to the hospital for the post-mortem to be conducted, a video of which was widely circulated on social media.

In May this year, a man was allegedly forced to carry his wife`s body on his shoulder in the absence of a hearse van in Uttar Pradesh`s Budaun city. Prior to that, relatives of a native of Uttar Pradesh`s Sambhal district were forced to carry his body on a motorcycle after the government hospital there denied an ambulance. However, hospital authorities in both cases have denied the allegations.