Cyberabad Police Commissioner VC Sajjanar on Friday addressed a press conference to recount the events that took place in the wee hours of Friday when the four accused in Hyderabad veterinarian gang rape and murder case were shot dead in a police encounter. 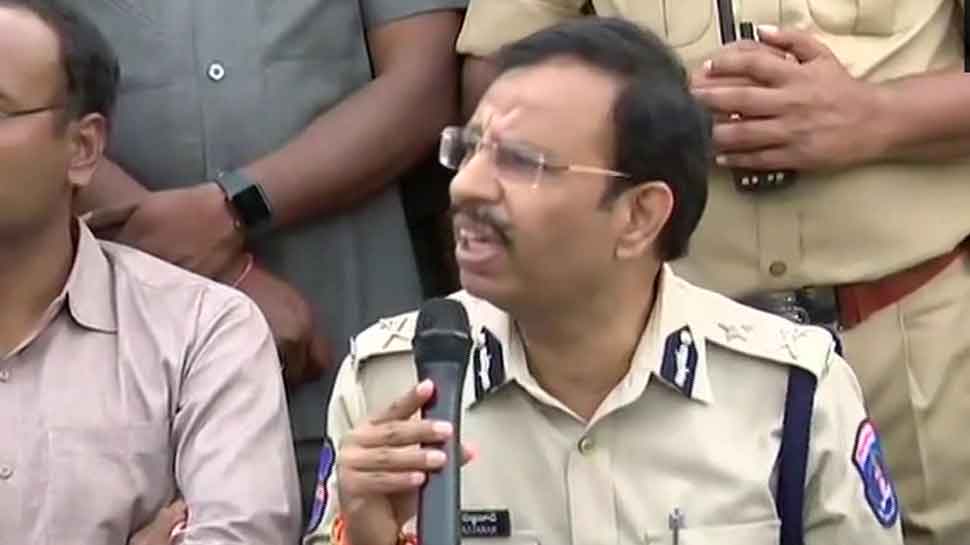 Cyberabad: Two of the four accused in the gang rape and murder of a Hyderabad based veterinary doctor attacked a team of police personnel accompanying them with bricks and sticks in the wee hours of Friday following which they also snatched the weapons of some of the cops. They then tried to shoot at the law enforcers following which the police team fired back killing all the four accused about 500 metres from the spot where they had killed and burnt the body of the 26-year-old vet on November 26.

The above sequence of events was narrated by Cyberabad Police Commissioner VC Sajjanar during a press conference on Friday afternoon. "The four accused had been in police custody for 10 days. We had interrogated all of them. When they confessed to the crime, we took them to the site where the incident occurred to reconstruct the scene. When we reached the spot the accused attacked us using stones and managed to snatch our guns. You can see that the accused are still lying there with the weapons. As a result, we had to engage in an encounter with them in which they were shot dead," the police commissioner said.

The Police Commissioner further said that the encounter took place between 5:45 am to 6:15 am on Friday. "There were about 10 police personnel with the accused when they were brought here, and the rest were in the police vans. The accused then attacked the team with sticks and then snatched the weapons from us and they started firing on police," he said.

VC Sajjanar added, "The police warned them and asked them to surrender but they continued to fire. Then we opened fire and they were killed in the encounter. During the encounter, two policemen have been injured and they have been shifted to the local hospital."

The Cyberabad top cop also informed that they have seized two weapons from the accused persons. "The body of the accused have been shifted to a local government hospital for post-mortem examination (PME)."

Sajjanar further said that the mobile phone of the  26-year-old victim, who was charred to death after being gang-raped at the same site, was also recovered from the spot.

Saying that the law has done its duty, the police commissioner said that the police suspects that the accused were also involved in many other cases in Karnataka state, and the investigation is on.

On being asked about National Human Rights Commission (NHRC) taking cognizance of today's encounter, the police commissioner said, "We will answer to whoever takes cognizance, the state government, NHRC, and to all concerned."

All the four accused in the gangrape and murder of a veterinary doctor in Hyderabad were killed in a police encounter on Friday morning. The encounter happened at the crime scene in Shadnagar, around 60 km from Hyderabad. The police had taken the accused - Mohammed, Jollu Shiva, Jollu Naveen and Chintakunta Chennakeshavulu - for the reconstruction of events as part of the investigation.

The family of the government veterinarian hailed Telangana Police after the encounter and said their daughter's soul must be at peace now. "It has been 10 days to the day my daughter died. I express my gratitude towards the police and government for this. My daughter`s soul must be at peace now," the victim's father said. "I am not going to get back my daughter but this will definitely send a strong message. This will instil fear and criminals will not dare to do what my daughter had to go through," he added.