Will kill terrorists in their dens, will not spare them even if they hide inside earth: Prime Minister Narendra Modi

Prime Minister Narendra Modi also lashed out at Opposition for questioning the valour of the armed forces. 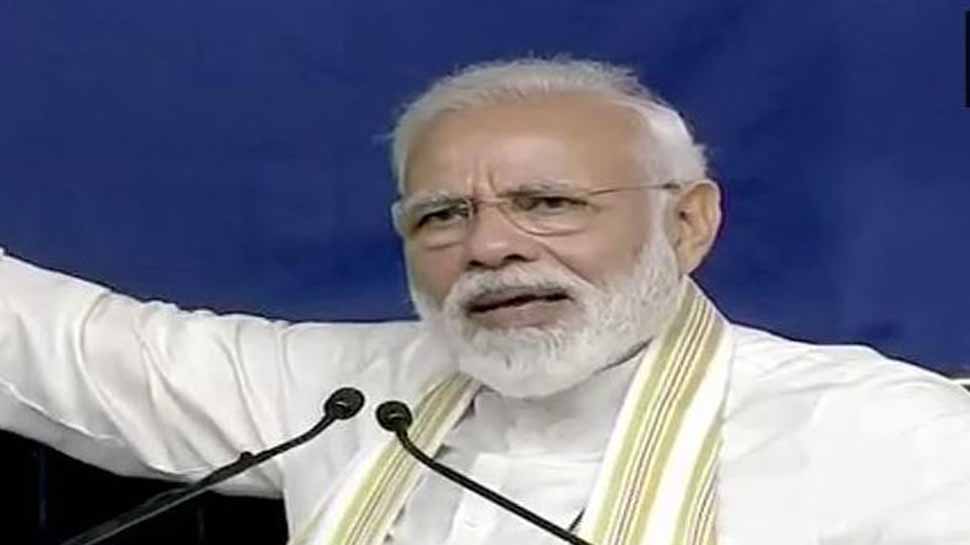 AHMEDABAD: Prime Minister Narendra Modi on Monday said he will find out those responsible for committing acts of terror inside India "even if they hide in the bowels of the earth".

The Prime Minister made the remarks while addressing a rally in Ahmedabad, Gujarat. He added that India will not wait for anyone and it is his style to respond at the right time. PM Modi stressed that his principle is to attack the terrorists in their den.

Modi also lashed out at Opposition for questioning the valour of the armed forces. "What our opposition leaders say become headlines in Pakistan newspaper today," Modi said.

Referring to India's air strike in Pakistan, Modi said, "If one work gets over, our government doesn't sleep, but gets ready for another." "We won't lag behind when it comes to taking big and bitter decisions," he said.

Referring to the IAF's air attack on Jaish-e-Mohammad's terror camp in Balakot, Prime Minister Modi said that the airstrikes should not be linked with the upcoming Lok Sabha polls. "If this is done for elections, were there elections when we carried out the first surgical strikes (in 2016)," he said.

Earlier in the day, Modi addressed a gathering of Patidar community in Jaspur and expressed confidence that he will return as Prime Minister once again after winning the upcoming Lok Sabha poll.

"Don`t worry... I am coming back in 2019, so if you need anything from the Central government, you can tell me," Modi was quoted by IANS as saying.

The Prime Minister started his two-day visit to his home state on Monday by laying the foundation stone for a desalination plant to convert sea water into fresh water.

The Prime Minister also inaugurated the six-km-long first phase of the Ahmedabad Metro rail from Vastral in the eastern suburbs of the city.

Before reaching Ahmedabad, Modi addressed a rally in Jamnagar and slammed the Opposition for not undertsanding the importance of Rafale fighter jets for the Indian Air Force.

He noted that the country's defence situation would have not been same if the Indian Air Force had Rafale in its arsenal. "Not one this side would have gone and no one on the other would have survived," he was quoted as saying by IANS.

The Prime Minister said that the Opposition must use "common sense" before talking about the Rafale jets. "If the Indian Air Force had the Rafale today, the situation would have been different, but some people do not have it in them to understand this," Modi said, adding "When I say this, they question the Air Force strikes."

Pakistan bans Hafiz Saeed's Jamaat-ud-Dawa and Falah-e-Insaniat, India says who are they fooling