A  a lavish spread of bananas, cucumbers, coconuts, apples and watermelons awaited the elephants in the capital. Down south in Hyderabad's zoo, a sumptuous buffet of cake made of ragi and rice topped with fruits, vegetables, sprouts and corn was offered to the animals 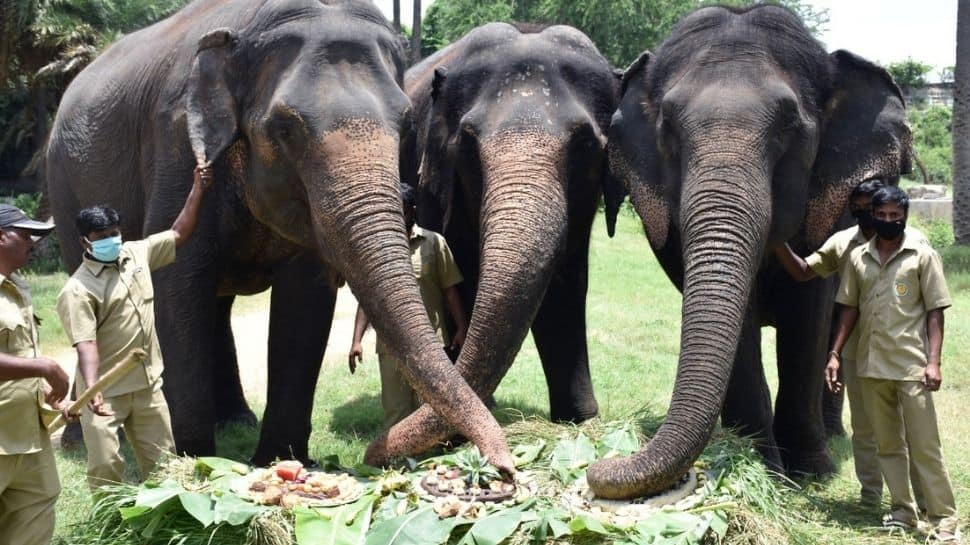 New Delhi: It was feast time for elephants at Delhi zoo on Thursday (August 12)! The elephants at the zoo relished a lavish spread of bananas, cucumbers, coconuts, apples and watermelons on the occasion of World Elephant Day on Thursday. The zoo has two Asian elephants, Hira and Laxmi. Zoo authorities also posted a picture of them gorging on food on Twitter.

And not just in Delhi, the elephants at Hyderabad zoo also had a feast day. At Nehru Zoological Park, in Hyderabad, the elephants enjoyed a sumptuous buffet of cake made of ragi and rice topped with fruits, vegetables, sprouts and corn, which were offered to the elephants along with sugarcane, pineapple, jaggery, coconut and green grass.

World Elephant Day is celebrated on August 12 to raise awareness about the preservation and protection of the pachyderms. The current population estimates indicate that there are about 50,000-60,000 Asian elephants in the world. More than 60 per cent of them are in India.

Meanwhile, earlier in the day, Union Environment Minister Bhupender Yadav said public participation and local knowledge are necessary tools for animal conservation and addressing man-animal conflicts. "We need to identify areas where man-animal conflicts exist. We will have to visit local areas while framing a policy to address these issues," the minister said at an event where he released the all-India synchronised methodology for elephant and tiger population estimation.

Animal conservation cannot happen without being on the ground as only technology cannot do it, the minister said, stressing the need for involving local and indigenous people in elephant conservation. A bottom up approach, which will also help in minimizing human-elephant conflict, is the way forward, he said.

In Assam, Minister for Environment and Forest Parimal Suklabaidya called upon all to take forward the "legacy of fruitful relationships with the gentle giants and continue to march ahead towards a balanced biodiversity for the overall well-being of nature".

Asian elephants are listed as "endangered" on the IUCN Red List of Threatened Species. This has been done as most of the range states, except India, have lost their viable elephant populations due to loss of habitats and poaching etc.