After his interaction, Reddy also conducted the first booth-cadre meeting under the Samara Shankaravam banner. 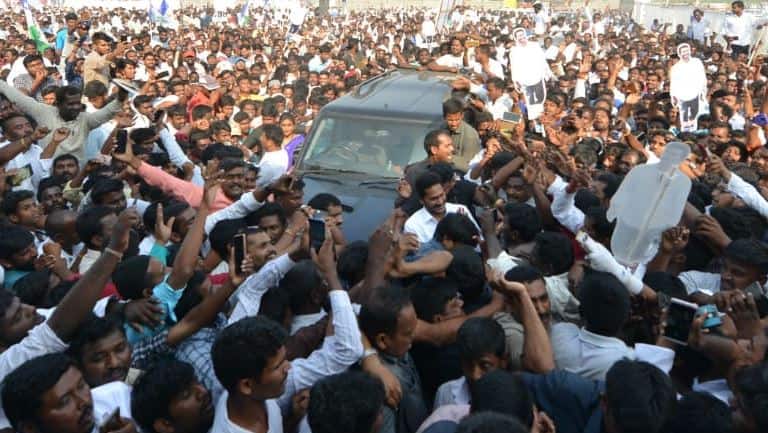 After his interaction, Reddy also conducted the first booth-cadre meeting under the Samara Shankaravam banner. The meeting was attended by 41,800 booth-level workers of the YSRCP

During his interaction with the influencers, Reddy conveyed his vision for Andhra Pradesh. He also particiapted in an open discussion in which the attendees were allowed to raise questions about the pressing issues of their regions. At the end of the session, the influencers asked Reddy questions on various issues ranging from his plans for the development of the state to his personal life.

Some of the questions asked during the influencer interaction were:

Bhaskar, who is an advocate, asked if Reddy would consider making education free for all.

JMR: In Navratnalu we have promised fee reimbursement for all levels of education, and we fully intend to keep that promise

Some members of the weaver community said that weavers were facing many issues because of GST and the lack of a weaver corporation. They asked if the YSR Congress chief will take up their case after coming to power

JMR: I have raised the issues of the weaver community many times during my Praja Sankalpa Yatra and I have promised Rs. 2,000/month for each weaver family in addition to the benefits of Navratnalu.

Hemachandra from Srikalahasthi asked what Reddy would do about the stalled Manyavaram project, which was started during Late Mr. YS Rajasekhar Reddy’s tenure?

JMR: If that project was completed it would have provided 5,000 jobs in Srikalahasthi. I will bring more industries to Andhra Pradesh and ensure that 75% of all jobs created by these industries go to the local people. I will pass a law to see that this happens, and ensure that it is strictly implemented

Prasanna Kumar from Kuppam asked about the Palaru project, which has been stalled in the middle, leading to serious water crisis in Kuppam?

JMR: As the son of YS Rajasekhar Reddy (who started the project), I will ensure that this project is completed and the water problems of Kuppam district are solved

After the conclusion of the influencer meet, Reddy proceeded to attend the first Samara Shankaravam (booth-cadre) meet. The session was quite interactive as booth-level workers were allowed to put forward their questions directly to Reddy.

Key points from Reddy’s address to the booth-workers:

- Every pain that the people of Andhra felt has touched my heart, and I’ll make sure to alleviate it

- All other parties have a cadre but I have a family. The people of Andhra Pradesh are my family

- In all likelihood the next parliament is going to be hung and YSRCP will support the party which will approve to sign the Special Category Status for Andhra Pradesh.

(with inputs from YSRCP press release)

Defence Ministry reacts on reports of Army's TA/DA being put on hold, says no shortage of funds