A suicide bomber from the Jaish-e-Mohammed (JeM) terror group rammed an explosives-laden vehicle into a CRPF bus in Pulwama district on Thursday afternoon. 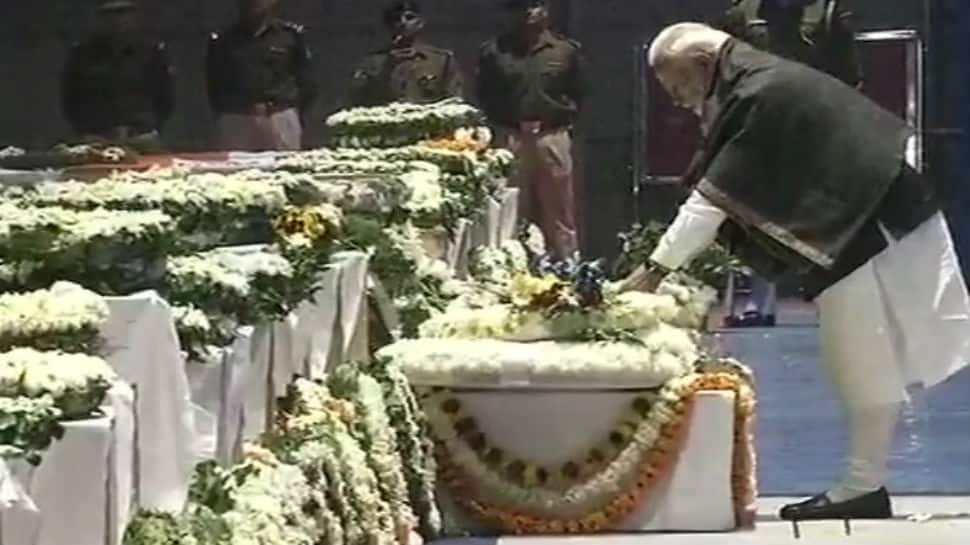 India on Friday withdrew the status of the Most Favoured Nation to Pakistan following the Awantipora attack in Jammu and Kashmir that killed at least 40 CRPF personnel. The CRPF has confirmed that a total of 40 CRPF personnel are confirmed dead. Of the total bodies, 36 bodies have been identified whereas four remain unidentified as of now.

Following the high-level meeting chaired by Prime Minister Narendra Modi, India decided to mull tough action against Pakistan and will prepare a dossier on the suicide attack.

READ | Explained: What is Most Favoured Nation

Prime Minister Narendra Modi warned saying, "The forces behind this act of terrorism and those responsible for it, will be definitely be punished."

The meeting was held to discuss the security situation in Jammu and Kashmir after one of the deadliest terror attacks in the state killed at least 40 personnel and critically wounded many. A suicide bomber from the Jaish-e-Mohammed (JeM) terror group rammed an explosives-laden vehicle into a CRPF bus in Pulwama district on Thursday afternoon.

The Cabinet Committee on Security (CCS) on Friday was headed by PM Modi and Defence Minister, Home Minister, External Affairs Minister and Finance Minister are its members.

More than 2,500 Central Reserve Police Force personnel, many of them returning from leave to rejoin duty in the Valley, were travelling in the convoy of 78 vehicles when they were ambushed on the Srinagar-Jammu highway at Latoomode in Awantipora in south Kashmir around 3.15 pm. The Pakistan-based Jaish-e-Mohammed (JeM) terror group has claimed responsibility for the attack that took place about 20 km from Srinagar, officials said.

Police identified the suicide bomber as Adil Ahmed, who officials said joined the Jaish in 2018. He was driving a vehicle packed with over 100 kg of explosives on the wrong side of the road and hit the bus, in which estimated 39-44 personnel were travelling, head-on, an official at the spot said.

The powerful explosion, which reduced the bus to a mangled heap of iron, was heard many kilometres away, including in some parts of Srinagar adjoining Pulwama district. Body parts could be seen strewn around the area.

PM Modi has asked ministers in BJP-governed states and BJP MPs to attend the last rites of jawans in their respective states and constituencies.

Maharashtra Chief Minister Devendra Fadnavis announces compensation of Rs 50 lakh for the families of the jawans from the state.

PM Modi has asked ministers in the BJP governed states and also the BJP MPs to attend the last rites of jawans, who lost their lives in the Pulwama attack, in their respective states and constituencies.

PM Narendra Modi, Rahul Gandhi among others to pay tributes.

Congress president Rahul Gandhi is going to Palam Airport where the mortal remains of CRPF jawans are being brought on Friday.

Visuals of protest from Lucknow:

Representatives from different diplomatic missions leave from the Ministry of External Affairs.

Uttarakhand Chief Minister Trivendra Singh Rawat announces an ex-gratia of Rs 25 lakh each to families of the jawans from the state who lost their lives in Pulwama attack. One member each from the families of the deceased jawans will also be given a government job, as per their qualification.

Representatives from Bangladesh, Sri Lanka, Afghanistan and Nepal are also present in the meeting.

Envoys and/or their representatives of several countries arrive at the Ministry of External Affairs as India launches a diplomatic offensive against Pakistan.

An all-party meeting will be held on Saturday at 1100hrs in the Parliament library.

"There are some elements who are hand in glove with terror organisations, terror forces and ISI across the border. They are involved in terror conspiracies too. They are toying with the future of the people, especially the youth in J&K," says Rajnath Singh. "There are some elements here who take money from Pakistan and ISI. I have told the officers that the security provided to such people should be reviewed."

In Srinagar, Rajnath Singh said, "I've requested state governments to extend the maximum help they can lend to the bereaved families. I've given all the necessary directions to the officers. The morale has not taken a hit. We'll see this fight against terrorism to the end."

Senior MEA officials are reaching out to all important partners via diplomatic missions in wake of the attack to apprise them of involvement of Pakistan backed terror groups: ANI sources

A total of seven people have been detained for questioning. Of the seven, six are from Singoo Nabal and Laroo area and one of them is from Ramoo village. All the seven people are from Pulwama district.

Separatist leaders Syed Ali Shah Geelani, Mirwaiz Umar Farooq and Yasin Malik stated that they "regret every killing" on Kashmir's soil, without mentioning the suicide attack by Pakistan-based terror outfit Jaish-e-Mohammed. "People and leadership of Kashmir regret every killing that happens on its soil," the statement said. "The delay in the resolution of the Kashmir dispute... Is wreaking havoc in Kashmir especially. If killing and counter killings have to stop and if we really want peace in the region, we have to put an end to hostilities. Engage and listen to the concerns of all three stakeholders and address them in the spirit of humanity and justice. Resolve the Kashmir dispute for all times," they added.

Lt General (Retd) DS Hooda who oversaw 2016 Surgical strike operation said, "It's a big tragedy and very clearly Pakistan's hand is completely revealed in this. There needs to be a response to this. But let's have a more consistent and long term policy."

The Siddhivinayak Ganapati Temple Trust has contributed a total of Rs 51 lakh to the families of the slain CRPF personnel.

RDX was not used in the attack on CRPF in Pulwama, but a deadly weapon was built using the things used in the common industries. According to the specialists who inspected the spot, the nails and  iron pieces were added to make make it more harmful. To make this, the things needed were collected gradually from common shops.

RDX was not used in the attack on CRPF in Pulwama, but a deadly weapon was built using the things used in the common industries. According to the specialists who inspected the spot, the nails and  iron pieces were added to make make it more harmful. To make this, the things needed were collected gradually from common shops.

RDX was not used in the attack on CRPF in Pulwama, but a deadly weapon was built using the things used in the common industries. According to the specialists who inspected the spot, nails, iron pieces were added to make it more harmful by filling. To make this, the things needed to be collected from common shops were collected gradually.

Indian High Commissioner to Pakistan Ajay Bisaria has been called to Delhi for consultations in the wake of the Awantipora attack. Bisaria will leave tonight for Delhi for the consultations on Saturday: ANI sources

#WATCH Slogans of 'Veer Jawan Amar Rahe' raised at CRPF camp in Budgam after wreath laying ceremony of soldiers who lost their lives in #PulwamaAttack pic.twitter.com/BvBGDYGT4w

In Jhansi, PM Modi said, "Our brave soldiers have sacrificed their lives and these sacrifices will not go in vain.The valour of our security forces has been witnessed by the country and there can be no one in our country who doubts their valour and bravery. Conspirators of Pulwama attack will be punished, our neighbouring country has forgotten that this is a new India. Pakistan is going through an economic crisis; Pakistan is roaming around with its begging bowl but it’s not getting help from the world. Our neighbours' intentions will be given a befitting reply by the people of India. All major world powers are standing with us&supporting us. The messages I have received show that they are not only sad, they are angry too. Everyone is in favour of ending terrorism."

The IAS Association of Uttarakhand will contribute a day's salary to the family members of the CRPF personnel who lost their lives. The amount will be sent to the CRPF Headquarters in Delhi.

The movement of the convoys of security forces in Kashmir has been suspended. A curfew has also been imposed in Jammu as a precautionary measure in view of massive protest after the attack and stone pelting, said officials. The Army has been requested to help the administration in maintaining law and order, said officials. The curfew has been imposed at Bus Stand, Nawabad, Bakshi Nagar, Peer Mitha, Pacca Danga, Channi Himmat, Janipur, Domana, and Bagh-E-Bahu areas.

China again declines to back India's appeal to list JeM chief Masood Azhar as global terrorist by the UN following the Pulwama attack.

Navjot Singh Sidhu said, "It is condemnable, it's a cowardly act. It needs a permanent solution through dialogue, how long will the Jawans sacrifice their lives? How long will the bloodshed continue? People who do this must be punished. Hurling abuses won't help."

Locals protest against Pakistan in Jammu and Kashmir's Kathua district.

The mortal remains of the CRPF personnel who lost their lives in at a CRPF camp in Budgam district of Jammu and Kashmir.

Jammu & Kashmir: Mortal remains of CRPF personnel who lost their lives in #PulwamaAttack yesterday, at CRPF camp in Budgam. pic.twitter.com/h4XoD5tC7o

Jharkhand Chief Minister Raghubar Das has announced a compensation of Rs one lakh rupees to the family of a martyred CRPF personnel, a resident of Gumla. The state government also promised a government job to one member of the family.